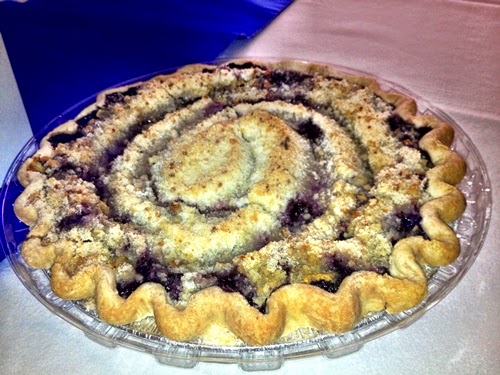 As a child, pies were generally something you bought from the frozen aisle at the store every now and then as a treat for me and my siblings.  It wasn't until my later years that I got to enjoy my first baked from homemade pie.  I still don't mind the grocery store version at your average picnic or barbecue, but a pie baked from scratch is generally something to be savored very slowly and with utmost delight.

I came to find out that I married into a pie-loving family.  At all the big family gatherings, there were all sorts of crusted examples of baked goodness, some of which had been passed down from previous generations.  I've also learned that my new home here has plenty of delectable examples of this baked good.

We hadn't decided what our contribution to the family get-together on Memorial Day would be as I was perusing one of my favorite local area blogs (The CMH Gourmand) when I happened on a post mentioning our subject line establishment: Honeykiss Bakery.  I had learned about and glanced at their website several months prior, posting a note to my brain back then that this site would be worth revisiting again.

Well, why not bring a pie?  It was time to check out the Honeykiss Bakery website again.  Sure enough, the bakery was taking orders for Memorial Day, but they needed to be put in within a couple days.

My spouse is a cherry fiend, and it's not a surprise that cherry pie is one of her favorite foods ever.  Honeykiss has a Cherry Cobbler and a Cherry Pistachio Pie on their menu that sounded awfully tempting.  But we're also fans of Brothers Drake mead and other brewed beverages in general, so when we read the bakery's description of their "My Blueberry Heaven Pie" together, even she had to agree that this would be our choice:

Because of our itinerary, we shot an e-mail to the owner Rachel to see if we could pick it up sometime after lunch on Saturday; she responded back quickly saying it would be no problem.  So after the Asian Festival (written about in a previous post) we skedaddled over to Grandview Heights to pick up our goodies.

A happy placard with the bakery's name greeted us at the entrance to the townhouse/bakery, located in a residential area not too far from Grandview's main drag.  We were invited in but not immediately greeted by Rachel, but in the kitchen we could see the freshly baked chocolate chip cookies resting on the counter that dominated the generally wonderful scents of freshly baked goods. 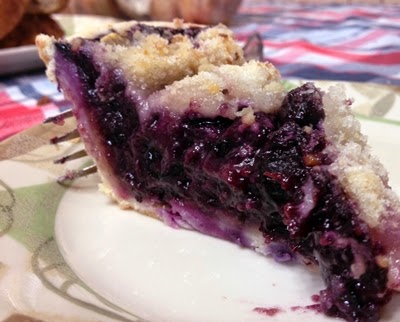 Shortly after, Rachel popped in, decked out with apron and cherry smile, though both my wife and I could tell this was not going to be a restful holiday for her.  We chatted for a bit on how we came to know of her business through the blog (while she did not know him personally, she had the pleasure of baking up a few goodies for the Gourmand), our love of the ingredients she used for the pie, and family gathering plans to pair up the pie along with very same mead she had used in her recipe.  She sounded quite excited for us, and we promised we would let her know how the pie went over.

Suffice it to say, the pie was a hit.  Unlike lesser blueberry pies where the filling is much too sweet, the blueberries provided all the needed sweetness, offset quite nicely by the tang of the lemon in both the surrounding filling and the topping itself.  The creamy layer between the topping and the filling and the from-scratch crust  just added another sublime touch that made each bite worth savoring.


I think a cherry pie from Honeykiss is calling our name sometime in the future...

2017 Update: Sadly, Honeykiss Bakery appears to have ceased operations around September 2016. What I wouldn't do for another slice of their peanut butter pie <sad face>
Posted by Joe