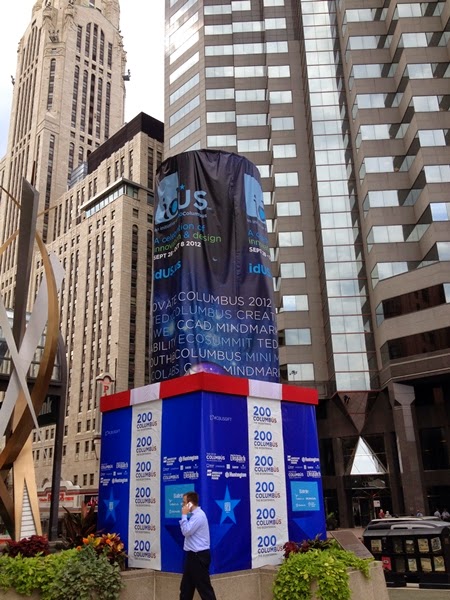 During my first drive into Columbus on I-71 back in 2007 (ironically, to pick up a friend at the CMH, never mind that I had NEVER been to Ohio before in my life,) I was struck by how similar the feeling was driving into California's capital city of Sacramento on I-80.

Of course, both cities are the capitals of their respective states.  For me, the skylines of both cities popped into view a lot later than I felt they should. Also, the skylines are somewhat non-distinct, with a smattering of modernish, medium-height buildings surrounding a fairly distinctive piece of architecture (for Columbus, the Leveque Tower; Sacramento, the Tower Bridge.)

Over time, other similarities occurred to me.  Both cities are of medium-sized surrounded by spread out suburb towns and relatively inexpensive and fairly easy-to-navigate airports.  Both cities are surrounded north and south by agricultural lands and sit at the confluence of regional rivers. Both cities are home to are coming off fairly recent landmark celebrations (a bicentennial here, and a sesquicentennial for Sacramento) and are pretty fanatical about their local sports scenes, though Columbus' love of The Ohio State Buckeyes is unmatched by pretty much anything in California as a whole.

Also, both cities also are striving for both a more favorable perception and attention as a whole.  For Sacramento, the challenge is two-fold.  For many Californians, Sacramento is something of a dirty word inextricably tied to the often contentious political climate, which perhaps unfairly overshadows the good that city may has to offer.  In addition, two long-time attractive neighbors lie just a couple hours away to the west on I-80 - San Francisco and San Jose and the surrounding Silicon Valley - making Sacramento's efforts to gain attention even more difficult.

Meanwhile, my impression is that Columbus is not associated with toxic politics by most Ohioans; instead, most of this grief appears aimed more on the national level.  Similarly, Columbus does not have any super-attractive regional neighbors (no offense to Cincinnati or Cleveland) to fight off for attention.

Columbus as a whole seems to have favorable winds behind it; it will be interesting to see what the city does with them over the next couple decades.