The Ice Cream Chronicles (Pt. 2): Jeni's From The Block

In 2011, the San Francisco Bay Area was in the midst of a gourmet ice cream boom, led by the shops such as Humphry Slocombe, Bi-Rite Creamery and Ici.  It was during this time when I heard that Columbus' own ice cream maven and Jeni's Splendid Ice Creams founder Jeni Britton Bauer was having a book signing at Omnivore Books in San Francisco.

I had just been introduced to Jeni's line of ice creams earlier in the month during a visit of my then long-distance girlfriend and current spouse.  We had closed out a "date night" with a Jeni's "One Night in Bangkok" sundae, a gloriously delicious combo of bananas and Bangkok peanut ice cream, spiced with cayenne pepper, and topped by caramel sauce, whipped cream, cherries, chopped Spanish peanuts, and a fortune cookie.

My better half already was into making ice cream at home, and I thought a signed book would be a terrific surprise for her upcoming birthday.  Two thoughts crossed my mind: could I make it to the signing considering rush hour traffic and lack of parking (not a chance; incidentally, she still did get the book for her birthday courtesy of her mom) and could Jeni's actually make an impression outside of Ohio?

Well, three years later, we know the answer.  Jeni's Splendid Ice Cream pints are now available in stores across the country, including the Bay Area. Jeni's stores are now established in several major cities around the U.S.  Ms. Bauer has also just released her second book and is now in the middle of her second nationwide book tour.

As hinted in my previous post, Jeni's has become one of my favorite Ice cream shops, with ten total retail locations in the Columbus metro area.  Their prices are on the higher end of the price scale as ice cream goes (just under $5 for two scoops to near $8 for basic sundaes; additional cost for sauces, waffle cones or their featured "Gravel" toppings.)   However, those prices have not stopped people from flocking to Jeni's stores to sample their often unique perennial and seasonal flavor offerings.

My spouse and I have sampled numerous creations from Jeni's and have rarely had a scoop that had a "hmmm, that's just okay" impression.  Over this time, both my spouse and I have made it routine to sample frozen confections from elsewhere, especially from shops in the San Francisco Bay Area.  We're both unanimous that Jeni's more than holds its own.

That got me to thinking: what ice cream shop that I've tried in my former stomping grounds did Jeni's remind me of the most?

After some thought, I gave that distinction to Humphry Slocombe, mainly for their own wild combinations that many would never figure would work in an ice cream. Interestingly enough, the owner of Humphry Slocombe, Jake Godby, was raised in nearby Zanesville (as detailed in this New York Times article), which only adds to this state's reputation for producing great ice cream.  However, the owners of these two nationally recognized stores take different tacks in regard to their frozen concoctions.

Godby takes a daring, more provocative approach in tweaking ice cream and food conventions in general; as stated in the New York Times article, Godby's "ice cream addresses two major grievances in the contemporary culinary scene: boredom with menus that all look the same, and irritation with the orthodoxy governing how we’re all supposed to eat (local, sustainable, organic, etc.)"  This notion is further reflected the over-the-top names/flavors featured at his shop such as Prosciutto, Government Cheese and the flagship Secret Breakfast.

In contrast, Bauer takes the more conventional (as gourmet ice cream goes,) more measured and more inviting approach. As she has stated in interviews such as this one for Scoopalicious, flavors which make the final roster are developed and tested via team effort, and has firm belief that adults and especially kids are open to new flavor ideas beyond the typical ice cream shop fare.  She is also firmly into sourcing locally at all her locations; for example, her Nashville location has partnerships with local brewer Yazoo and an excellent distiller that my spouse and I discovered on a trip into Kentucky, Corsair Artisan. 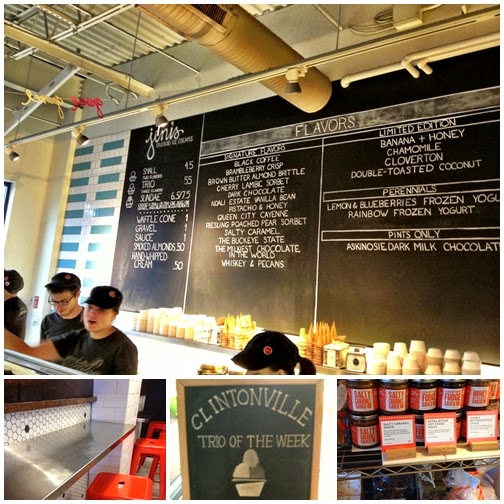 This measured approach is also reflected in the appearance of Jeni's retail stores, of which I have visited several.  Yes, each one has its own individual touches based on the architecture and structure of its housing building. However, there are certain touches ubiquitous to each one (chalkboard menus, neatly scripted and labeled ice cream descriptions and display cases, neatly manicured seating and working areas etc.) that lets everyone know that you just haven't walked into just any ordinary ice cream parlor.

Well, what about those flavors?  It's really impossible to pick out a favorite for me, so maybe it's more instructive to demonstrate my experience with a flavor that I would have looked at with a bit of askance in the past.

After sampling the very nice Petit Saison by local brewer Rockmill Brewery for dinner, I had business over in Grandview Heights at local coffee roaster Stauf's.  When I passed by nearby Jeni's, the muggy conditions and mindset (I had had Jeni's newly released Pineapple Upside Down Cake flavor on my mind for several days beforehand) meant little resistance to drop by and sample one or two scoops.

Lo and behold, I had not known that Jeni's had also released a Saison with Sunflower Seeds and Flax flavor in collaboration with Rockmill.  I asked for a spoon sampler, and my tongue was coated with a wonderful cornucopia of sour, sweet and salty goodness melting around the unexpected but welcomed texture in the pepita and sunflower seeds.  This scoop was easily the taste highlight of the evening, and only confirmed that, indeed, Jeni's is doing something rather splendid.