My Secret Life In The CSA 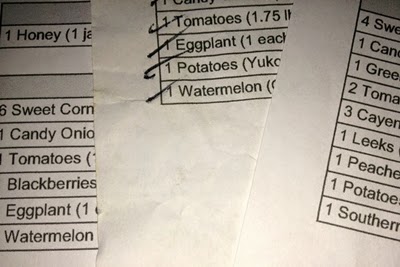 After this particularly brutal winter season, the opening of outdoor farmers markets were a welcome sight to many local residents.  And with the warmer weather, the bounty of vegetables and fruits arriving to vendors' stands will only increase in the upcoming weeks.

Community Supported Agriculture (CSA) has also proven to be a popular way for people to receive the freshest local agricultural products.  In short, the subscriber purchases a share of the whatever the farm or farm-collective is planning to produce for a prescribed time period (typically, a growing season.)  In return, the farm regularly delivers the subscriber their share throughout that time period, either directly to their residence or at a central collection point.

Typically, this is a win-win situation for the farmer (ensuring a customer base for their product), the customer (who can gain the freshest and widest-variety of local agricultural products with little time spent or effort), the local economy (as money spent generally stays local) and the environment as a whole (less resources are used due to the lesser distances required to get these products to the consumer.)

This blog was not around when my spouse decided to join a local CSA last summer.  It was definitely a worthwhile experience, and I wanted to share some of our experiences with the process.

1) The Search: We used online local resources such as Local Harvest to help us find the best candidate.  Based on a colleague's recommendation, the fact that fruit was part of the offerings (not all CSA's offer fruit), customization of orders (you could reduce and increase orders of certain items to a certain point) and the fact that delivery was available directly to our residence (we found we could not make the pick-up times and locations for most of the CSA's we looked into,) New Century CSA out of Circleville, approximately 30 miles south of downtown Columbus, was our choice for a small share subscription.

2) The Shared (Risk): Weather is often the biggest factor in relation to when something comes into season, and we found that we were essentially in the same boat.  Some fruits and veggies were delayed, while others were sent with a note that they should be used more quickly than normal (e.g. cherries that were affected by a surplus of rainy weather.)

3) The Season: When something's in season, you typically get that item for several weeks in a row.  With "multi-use" produce like carrots and tomatoes, finding new ways to use them in our cooking turned out to be a fun venture.  I confess that I was lettuced out after several weeks in a row of the leafy stuff, and there was a time when I didn't want to see another candy onion again.  Other items we knew we would struggle with (beets - we do not particularly care for them) but we went in willing to give those a fair chance.

4) The Sweet Surprises: One of the biggest reasons why a CSA appealed to us was the opportunity to expand our culinary horizons, and sure enough we were not disappointed.  A Napa cabbage led us to discover an easy homemade Kimchi recipe, and we found that pickling both radishes and kohlrabi can be very tasty ventures.  I personally have never found cantaloupe to be a very tasty fruit, but this big specimen we received from our CSA was something of a mind-changer.  It was so large, we made a cantaloupe sorbet, parceled out to some friends, cubed some out in the fridge for munching, and still couldn't finish it all.  Even more familiar items led to inspiration - a batch of green beans and a chance sighting of some Szechuan Peppercorns at a spice market led to our first (yummy) venture into Dry Fried Green Beans.

5) The Size: In the end, even the small size was too large for us.  We just did not predict at the time we signed up that we would be on the go as much as we ended up being during our subscription season, so there were a couple weeks when we couldn't get through everything.  If we do try out a CSA again, we may choose to have a partner or two to make sure the food does not go to waste (if you're trying out a CSA, this may be a good approach in general if you're testing the concept.)

6) The Service: New Century CSA provided great service to us and is definitely worth consideration if you are interested in joining a CSA.  There were some mix-ups with the initial deliveries (our house can be a little tricky to find) but they worked closely with us to get those rectified.  For our inconvenience on both misdeliveries, they provided us a credit to use on future weekly allotments and offered to bring a second delivery out the same week if our shipment could not be found (fortunately for both us, we were able to locate the wayward produce.)

They also kept us well-informed about general goings-on and potential issues with future shipments (e.g. the rain-soaked cherries mentioned previously.)  The quality of the produce received was for the most part top-notch, though at times even the hot weather got the best of our cheapo ice chest with the produce inside feeling the effects.