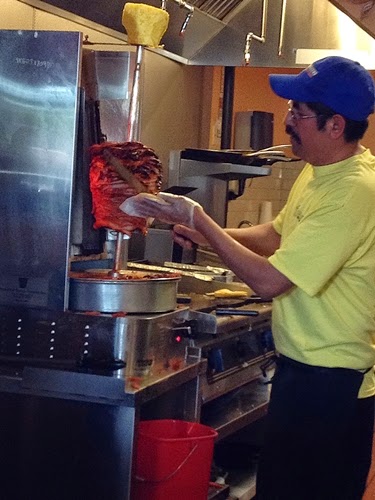 This picture is proof that I am still learning new things about food.

The taquerias and taco trucks around my former stomping grounds of the San Francisco Bay Area were often good bets for a cheap, tasty and filling meal.  And without fail, I requested that at least one of my street tacos on every order were filled with al pastor, preferably the spicy variety.

Places like Taqueria San Jose in the San Francisco Mission District, or taco trucks like the Guadalajara Taco Truck (at the corner of Ohio Street by sheer coincidence) nearer to my home in Vallejo, would always be special visits, as I knew my taste buds would be dancing to a savory symphony of flavor.

I learned then that the places to get al pastor were those with a trompo, where marinated pork was wrapped around a vertical rotisserie spit and slowly cooked over a gas flame and sliced off by the cook when another order was received. No rotisserie spit meant you had little to no chance of getting the very best.

Since I have been to Columbus, I haven't really endeavored to sample street tacos in general, and frankly I don't know why.  On one early visit, I ended up at Taqueria Los Primos (I was actually trying to find Junior's Tacos at the time but was unsuccessful) and ended up with a variety of tacos, including al pastor (which was a solid version, from what I remember.)

In my first year of residence here in 2012, I made the grand trip over to the Columbus mecca of al pastor, Los Guachos.  And I admit, it wasn't what I was used to - the pastor, while juicy and tender, had a sweetish flavor which I learned came from their use of pineapple.  A pineapple was placed at the top of the spit to drip on the meat to give it a crispy, carmelized exterior, and a sliver of pineapple was included with the tacos themselves. I went away not necessarily disappointed, but perhaps a little confused because it simply was a taste profile I had not been expecting. 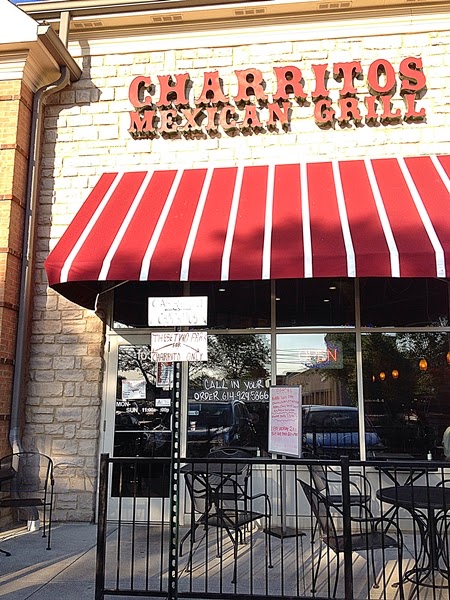 Forward to the present with Charritos, a newish Mexican restaurant located in the Arlington Pointe strip mall in Upper Arlington.  I had seen the "Now Open" signs driving by the area in the previous months, I had been craving something along the street taco vein in the past week or so, and my spouse and I were both on our own for dinner that day.

I walked in to a space with a few diners and very high ceilings; in fact, you had to crane your neck a bit to look at the main menu board overhead (thankfully, they had copies of the menu as well as a chalkboard with the daily specials posted next to the cash register.)

The only workers visible to me at the time were (I presume) the husband/wife co-owners of the restaurant, who were running around trying to keep on top of things.  That didn't stop the husband, a quite personable fellow, from chatting me up after I had walked in and surveyed their menu.  It looked like he had experience in food service in the past, as he fluidly from task to task while keeping his conversation going. 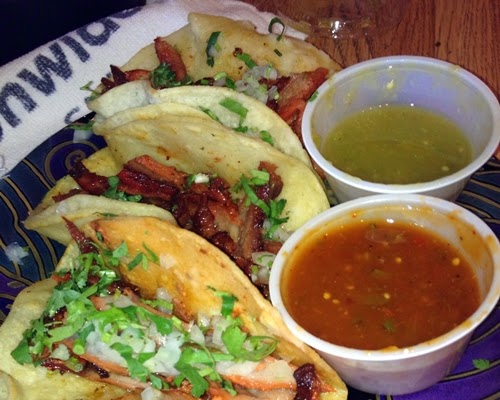 I was here for the al pastor no ifs, ands or buts. When I put in my order for four tacos ($6 plus tax) he mentioned that I should come in on Mondays, when they have a two for one al pastor special.  As I nodded my agreement, he shouted out some directions to his spouse and proceeded to assist another diner.  Soon after, he went to the trompo to slice off what looked to be some truly delicious pork.

My tacos all came with double tortillas with ample amounts of chopped onions, cilantro and al pastor. The al pastor?  Not spicy, but definitely closer to the versions I have had in California and quite tasty.  The red and green sauces that came with the order were nice renditions, both sporting the tang of vinegar and the green sauce bringing more kick.

Now here's he where the learning came in: I had not detected the same level of sweetness with Charritos' version of al pastor, save for the carmelized bits.  And I swore I did not see any hint of la piña in or around the trompo.  But yes, that first picture said otherwise - there on top is a large hunk of that yellow fruit, which helped with the nice carmelized exterior on these slices of al pastor.

More learning took place with my research performed by me shortly after my Charritos meal.  I found that pineapple use for al pastor was fairly common depending on the region in Mexico.  Also, I found that while there were places in the Bay Area that used pineapple for their al pastor preparation, it was a little on the uncommon side.

I think two future visits are in order.  One is a return trip to Los Guachos to experience their food with a mind more well-informed and a willingness to expand my horizons.

The second visit is a return to Charritos.  Yes, the two-for-one al pastor night sounds perfect for a truly tasty chowdown, but I look forward to sampling other menu intriguing menu items like the tlayudas, the cubacharrito torta, and the Oaxacan melted cheese appetizer) have me intrigued.  There is definitely something quite tasty cooking up behind these doors.