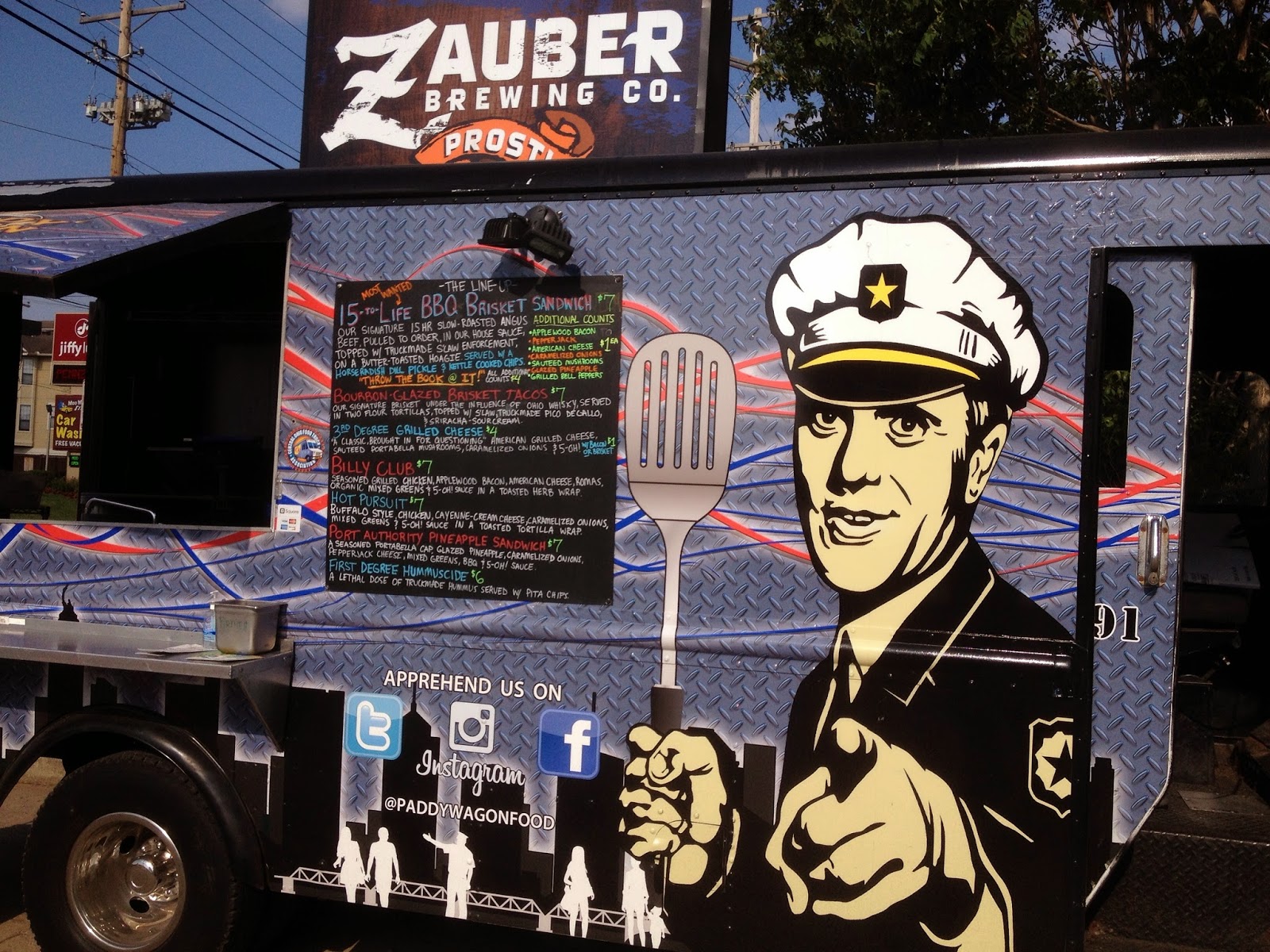 I had not intended to do two food trucks on this particular day, but as mentioned in the part one portion of this post, Stacey's Five Dollar Hollar Food Truck proved to be conveniently placed for me in regards to grabbing a quick lunch.   And with it being such a filling lunch, I had a notion I might be going for a gut-buster of a day food-wise.  This was mainly due to the fact that later that day, I would be meeting up with my spouse for a pre-downtown-show visit to Zauber Brewing in Grandview Heights, where the Paddy Wagon food truck would be providing the eats for the evening.

As it turned out, this was a return visit to Zauber for both of us.  Our previous visit had been a few weeks prior on a Wednesday, when we found out to our dismay that the brewery had run out of its own beer on tap for drinking.  When we found out that Thursday every week is when they tap their new releases, we made a point of making a visit on that day in the near future. 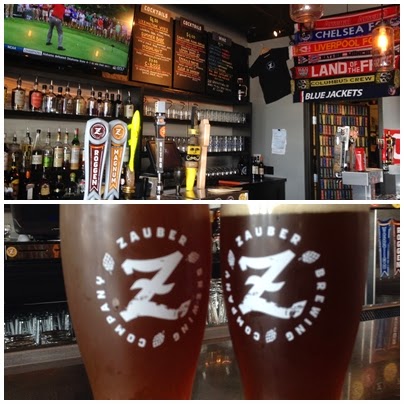 Zauber's taproom, opened early in 2014, has a beer-hall feel with an slight industrial twist.  The space itself feels very roomy, with a central bar area surrounded by wooden picnic table and bench seating. A few TVs and sports memorabilia (mainly soccer-related) was visible on the walls; this seems like a potentially raucous place to check out a Premier League or World Cup match, or even an NHL playoff game.  We had noticed it was a solid gathering place for other ventures, such as board-gaming (in fact, they have board games available at the bar and have official game nights on Wednesday.)  In addition, they have a "Teaser Tuesday", where samples of their Thursday releases are available from 5-7 PM for $1.50.  If their own beers aren't available, they have a nice selection of both local and national craft brews on tap as well as a new cocktail selection featuring some local Ohio distilleries.

As it turned out, two of their beers (Zauber leans mainly on German and Belgian styles) were available on draft: the Magnum, a Belgian copper ale, and the Roggen Rye, a Roggenbier.  As is our typical thing, we order one each of the beers for mutual sampling.  We both agreed that both beers were solid and would work well for quenching the thirst on this summer-like warm day, but we both agreed we liked the Magnum just a slight bit better.

Since we were here to eat as well, we looked over Paddy Wagon's clever (or groan-worthy, depending on your view of puns) menu cards, which had been placed at all the benches for patrons to peruse.  My inclination initially was to go for the Bourbon-Glazed Bourbon Tacos, but since I had tacos earlier in the day, I opted instead for their "Common Law" Special of the Week, a Mediterranean burger with feta, mixed greens, and a truck-made tzatziki.  My spouse decided on the "15-to-Life Brisket Sandwich" which, with the addition of carmelized onions, matched the $8 price of my burger.

To be truthful, I was expecting a fairly large amount of food (maybe the bold theme of the truck had an effect on my perception) so I was little surprised to get a modestly-sized, well-crafted burger along with a side of kettle chips.  The burger was solid - the patty was a little on the dry side, but that was offset by a fine rendition of tzatziki sauce (actually, I would've loved more of it it was that tasty. 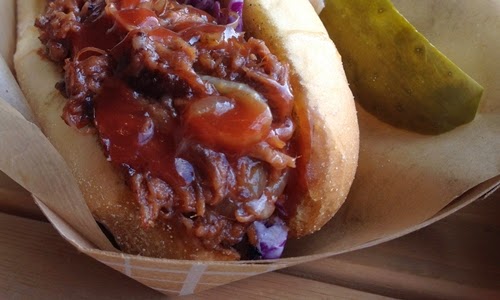 The true standout for both of us was the brisket, which was again a modest-sized item.  The tender beef matched with their signature sauce, plus the onions - it was just plain and simple GOOD.  Yes, the bourbon tacos still sound good, but on my next visit, they'll have to book me for 15-to-Life, because it will be the brisket with which I'll be absconding.  I suspect my spouse will be right there with me.

And yes, we hadn't even reached the proverbial cherry on top yet - a full night of laughs with Eddie Izzard at the Palace Theater downtown.  Taken altogether, this was a might tasty day all around, no matter what language you may speak.  Prost!