In The Shadow of Giants (Pt. 1): An Oasis for the Heretics

As one travels eastward on Interstate 80 into the Suisun Valley in California's Solano County, a billboard or two may alert the uninformed that Fairfield, the county seat, is home to one of the most famous of candy confectioners in Jelly Belly. As my spouse and I will attest, the factory tour is definitely more than worth the time, with a weekday far preferable as you can see the machinery in full action,

Driving up a little farther up the freeway, this same newcomer to the area may catch a whiff another uniquely sweet smell not too long afterward. The source of this scent is quickly identified - just to the south of the interstate, the sizable structure (700,000 square feet worth, in fact) that is the Fairfield branch of international beer maker Anheuser Busch chugs away, like it has since 1976 and all by its seeming lonesome.

Digging deeper, one will discover that this has not always been the case - the small but plucky brewpub Blue Frog Grog & Grill plied its craft beer offerings for locals in the know starting in 1999, making a solid run as an independent business until the owners sold their business in 2013 (in a somewhat odd twist, the brews have been adopted as restaurant chain Fuddrucker's craft beer offerings in the Bay Area.)

But what Fairfield may have lost in 2013 by the Blue Frog's disappearance it gained back in spades later that year. Some would even say there was a great deal of heresy involved.

Going Back To Buellton: Firestone Walker/Barrelworks

Yes, the thought of leaving sun-drenched lands such as San Diego did give my spouse a tinge of sadness; this feeling was further enhanced as the skies grew more overcast and the a persistent mist to light drizzle met us as we traveled out of the greater Los Angeles metro northward.

Yet, we actually still had something to look forward to on the long trip back to the Bay Area, courtesy of a detour we knew we needed to make, to complete a journey over three years prior that had been derailed by an inadvertent early arrival to a prime destination on an otherwise excellent Christmas-time trip down to the Santa Ynez Valley some three years ago,

We were headed to Buellton, and if things went to plan, this would be a rather tart affair.

Alas, all vacations must end, and our sun-drenched romp through San Diego reached its invitable conclusion. Without a doubt, we were pleased with how it all came out, as we received our fill of yummy craft beer, lovely ocean shore vistas, and a healthy dose of natural Vitamin D.

However, we didn't want to depart without mentioning our most favorite meal of the day in breakfast and brunch. Typically, this is where we spend most of our going out money back home in Columbus, but it turned out to take a bit of a back seat on this particular jaunt. Not that there weren't worthy places available (one such place, Hash House a Go Go, even offers a touch of the Midwest as an option), but those will have to wait until a more lengthy and more easy-going return back to the area.

With that said, there were plenty of nice little finds on our trip, the first of them residing in the Victorian home-laced neighborhood of Golden Hill.
Read more »
Posted by Joe No comments: Links to this post

As I've entered year four of these chronicles, I've begun to realize that the world of frozen confections is much more than just ice cream. I've ventured a touch beyond that when it came to Whit's and their frozen custard, but I figured why should I be limiting myself?  Time is short, and there's plenty of places I haven't gotten to yet.

So why not gelato, ice cream's silkier Italian cousin? And why not start in a place where you can find two ladies having a deep conversation in that very same language in the corner of the cafe? 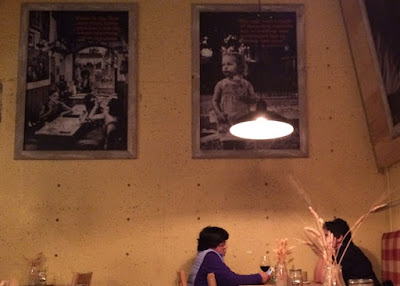 Successful brewery hopping requires a few things to make it through to the end in good shape. In lieu of a hired/designated driver, pacing is vital, along with common sense things like proper hydration and keeping well fed throughout the journey. After visits to Longship Brewing and White Labs (contained in this previous blog post) we figured it was time to pack our bellies with some sustenance. But then the next obvious question popped up: where?

Here's where a nice chance glance came into play. I had noticed what seemed to be a restaurant called CapeTown, as in the western port city located in South Africa. My spouse had had a niece spend some time in that country during her educational studies, and Columbus itself has a food truck that features South African specialties in Fetty's Street Food - could this actually be a South African cuisine restaurant?

A quick check of the smart phone confirmed our suspicions, and we made the short drive over.

1986 saw the release of the smash movie "Top Gun" (the nickname for the Navy Fighter Weapons School), where Tom Cruise's character Maverick overcomes long odds and tragedy to earn his place among the best pilots in the service. As the film roared to be the top gun at the box office (just edging out, yes, Paul Hogan and his "Crocodile Dundee"), I doubt anyone people who lived around NAS Miramar and the surrounding Miramar neighborhood, which had served as home for the program since its inception in 1969, would've or could've suspected that just ten years later, the program would be literally flying the coop.

Indeed, the Base Realignment and Closure Commission in 1993 recommended the base be transferred to the Marine Corps to consolidate their area presence into one location, and that the Top Gun program be transferred to NAS Fallon in the high plateau of Nevada. Despite local objections, the last of the program's planes roared off Miramar runways on May 29, 1996, never to come back to San Diego.

Similarly, if one were to poll the locals during the final days before the program's departure in 1996, I suspect very few if any of them would have foreseen that their neighborhood would become the craft beer hub that many have dubbed "Beeramar" one decade later.

A Lovely Sessions Ale: Balboa Park and The Museum of Man

For the first time visitor to San Diego, it's hard to go wrong by scheduling a visit to the urban playground that is Balboa Park. Built on land that was designated for recreation even before the Mexican government was forced to cede the area to the United States due to the Mexican-American War, Balboa Park offers numerous attractions to keep anyone entertained, including gardens, museums, and the internationally-renowned San Diego Zoo.

As we drove in this day, my spouse and I noticed that the park was teeming with trees, a development that would not be anything out of the ordinary. However, appearances can be deceiving - as we walked toward the main thoroughfare in the park, the El Prado, we noticed rather uniquely barked tree that resembled an Banyan Tree with fruit of some sort growing overhead. As it turned out, the trees were Moreton Bay Fig Trees, a native of Eastern Australia.

I remember being asked in jest by one of my spouse's friends shortly after my first winter here in Ohio if the cold weather had scared me away yet.  As it turned out, other than having the two coldest, iciest days of that season take place on moving days, it really wasn't all that bad.

Another colleague butted in immediately after my response, "Oh, no, you really haven't experienced an Ohio winter yet, trust me." Sure enough, the next two winters, including the dreaded "Polar Vortex" winter, froze me to my bones, but they say what does not kill you makes you stronger. Ohio had officially toughened me up.

Fast forward to the present - I think most Central Ohioans would be in happy agreement that for the most part, winter has been a no-show this season. I mean, patio weather in February in the Midwest region in general is something to, well, spend some time on the patio hoisting a beer or two.

Or maybe down a couple cold scoops of ice cream. It seemed it was time to revive the Ice Cream Chronicles for the new year.

It's impossible to deny San Diego's status as a craft beer mecca: as I type, the region is on the verge of 140 total breweries, While the abundant sunshine that San Diego is known for was more than enough reason for our visit, this particular status provided the proverbial foamy head of affirmation on our "where shall we go?" destination stein.

However, it's easy to forget that, at least by California standards, this area was late to the party. Tom Acitelli's all-encompassing book on the emergence of the U.S. craft beer scene, "The Audacity of Hops", noted for several decades up until 1989, beer choices for the local consumer were either U.S. big beer adjunct lagers or their Mexican counterparts (Corona, Tecate, etc.) As detailed by Acitelli himself, "the craft beer movement...seemed a world away; the odd Anchor (Steam Brewing) tap or six-pack the only glimpse a San Diegan might catch of it."