Successful brewery hopping requires a few things to make it through to the end in good shape. In lieu of a hired/designated driver, pacing is vital, along with common sense things like proper hydration and keeping well fed throughout the journey. After visits to Longship Brewing and White Labs (contained in this previous blog post) we figured it was time to pack our bellies with some sustenance. But then the next obvious question popped up: where?

Here's where a nice chance glance came into play. I had noticed what seemed to be a restaurant called CapeTown, as in the western port city located in South Africa. My spouse had had a niece spend some time in that country during her educational studies, and Columbus itself has a food truck that features South African specialties in Fetty's Street Food - could this actually be a South African cuisine restaurant?

A quick check of the smart phone confirmed our suspicions, and we made the short drive over. 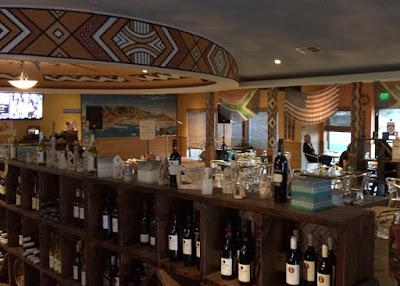 As we found out, Miramar's CapeTown is a bit of a gathering hole for the locals, both in its scheduled musical acts as well as broadcasts of rugby and other sports big in South Africa. Also, the eatery sports a little grocery store which includes a fairly extensive wine selection and various foodstuffs I will assume are popular back in home country. This area also includes some convenient take-and-bake versions of restaurant specialties for those who can't stay for a sit-down dinner.

Finally, of course, is the bar and restaurant itself. The interior sports prominent African-styled patterns and colors, and various media related to South Africa, We ended up seated next to both cloth versions of the South African and the U.S. flags (the latter of which sported 85 stars in the field of blue, oddly enough.) FWIW, we weren't looking for a craft brew with our dinner, but sure enough, CapeTown had its share of San Diego locals on tap, continuing a trend we had noted in this blog post, 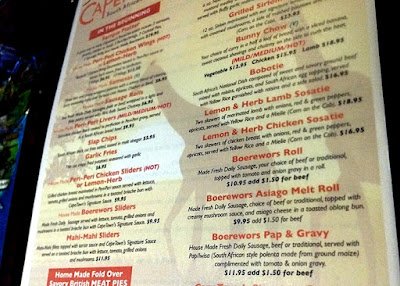 CapeTown touts their menu as a fusion menu, so how their Bobotie (Sweet and savory ground beef mixed with apricots, raisins and walnuts) or their Peri-Peri chicken (which I first experienced at Nando's in Malaysia, of all places) rates against the homeland versions I can't say. But what we did have, the Bunny Chow (my spouse's niece made that recommendation) and my Boerewors (their housemade sausage) Pap & Gravy were very tasty dishes. 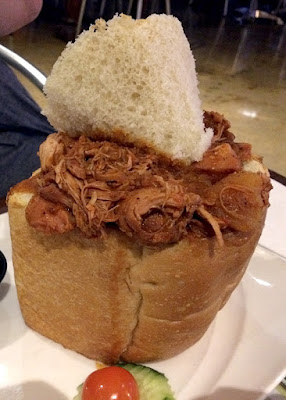 The former dish was a definite tummy filler, with plenty of decently heat-laden curried chicken inside a cored-out bread loaf, while my housemade Boerwors was a nicely chunky sausage with a hint of allspice and clove, going well with the accompanying tomato gravy and polenta. 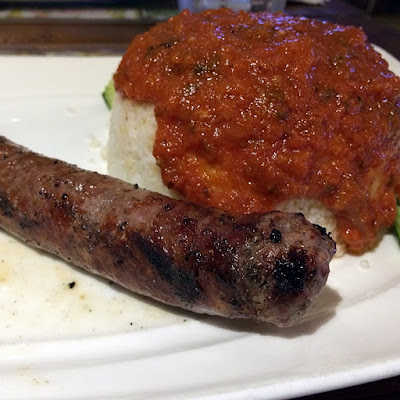 With stomachs now geared for night cap, we ventured onto our our last destination for the night, which proved a perfect capper for a completely nerdy/"Beer Geek"y tour of Beeramar in Mikkeller Brewery, the first true brick-and-mortar brewery for acclaimed gypsy brewer Mikkel Borg Bjergsø. 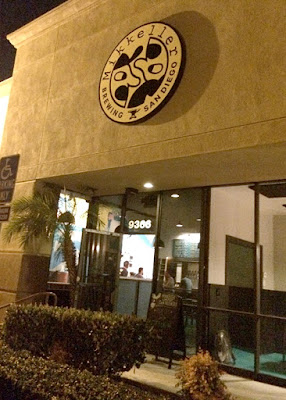 Our first experience with the Bjergsø's beers came at a Mikkeller Bar we had visited in San Francisco a few years ago. There, we received something of a very cerebral beer experience, with their offerings served with both proper temperature and glassware. Any notion of a similar experience at Mikkeller's San Diego location were quickly quashed by the thumping beats of 2Pac's "California Love." This was definitely the more typical-style taproom setup we were used to, with a blending of the hip and hip-hop on this night. 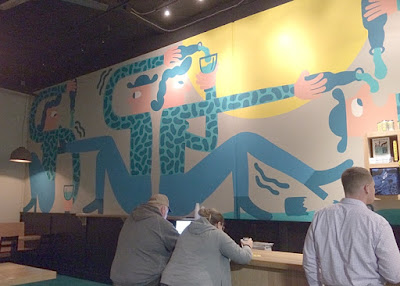 Mikkeller's space had a former life as Alesmith's Beeramar location; when they moved to larger digs in 2015, owner and head brewer Peter Zien personally contacted his best friend Bjergsø to see if he would be willing to partner up and take over the space. Realizing the opportunity to brew his beers freshly for the American market, Bjergsø was only happy to accept the offer, with Alesmith veteran Bill Batten to handle the head brewer slot (note: Batten resigned from his position on March 9, as detailed by this TheFullPint.com article.)

Glancing around the fairly quaint interior, Mikkeller's signature artwork (designed since 2013 by artist Keith Shore) dominates the one side of the room, but Alesmith's name can still be seen on the impressive-looking bottling machine to the rear of the space. Here, the vibe definitely was reflective of our midweek status, with people intent to hang out and de-stress from the work day more than create a ruckus. 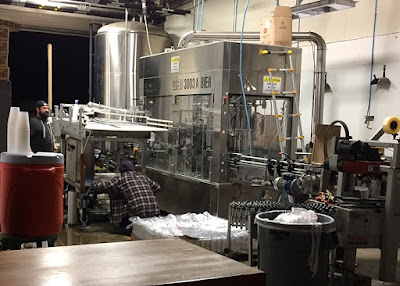 The beers on tap this night were a mix of Mikkeller's more experimental brews (various variaitons on their "Geek" series of brews, as well as one of my favorites for the night, the Blueberry Shuffle, an Oatwine Braggot collaboration with the well-regarded Superstition Meadery in Prescott, AZ)  as well as styles more familiar to the area craft beer drinker (a variety of IPAs, pale ales, and pilsners.) 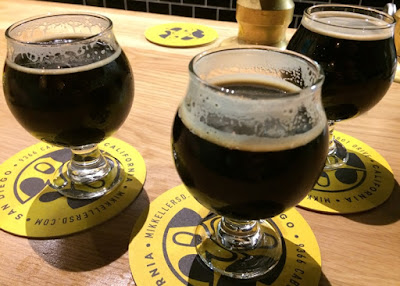 To borrow from one of the song lyrics (courtesy of the Wilson Brothers aka The Gap Band) played this night, there were no "oops upside your head" beers on this night, rating from solid to very good in our books. On this night, we drifted towards are general preferences, as my spouse dug the IPA brews a little more while I enjoyed the Beer Geek stout variants.

We left Mikkeller that night knowing we had just barely scratched the surface of Beeramar, not to mention the San Diego craft beer scene as a whole. Suffice it to say, we're eager to do more scratching, and hopefully more sooner than later.