1986 saw the release of the smash movie "Top Gun" (the nickname for the Navy Fighter Weapons School), where Tom Cruise's character Maverick overcomes long odds and tragedy to earn his place among the best pilots in the service. As the film roared to be the top gun at the box office (just edging out, yes, Paul Hogan and his "Crocodile Dundee"), I doubt anyone people who lived around NAS Miramar and the surrounding Miramar neighborhood, which had served as home for the program since its inception in 1969, would've or could've suspected that just ten years later, the program would be literally flying the coop.

Indeed, the Base Realignment and Closure Commission in 1993 recommended the base be transferred to the Marine Corps to consolidate their area presence into one location, and that the Top Gun program be transferred to NAS Fallon in the high plateau of Nevada. Despite local objections, the last of the program's planes roared off Miramar runways on May 29, 1996, never to come back to San Diego.

Similarly, if one were to poll the locals during the final days before the program's departure in 1996, I suspect very few if any of them would have foreseen that their neighborhood would become the craft beer hub that many have dubbed "Beeramar" one decade later. 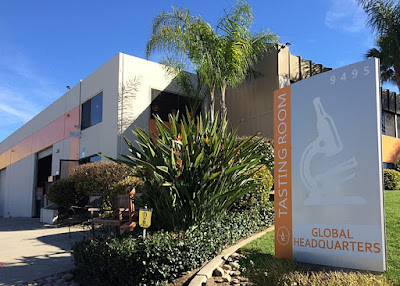 With nearly 20 breweries within roughly 12 square mile area, and many grouped within easy walking distance of each other, this region offers a great chance for some mass-brewery visiting. However, with plenty of other craft beer destinations (planned and unexpected, as noted in this recent blog post) on this trip, we figured our livers would be best served with three destinations. Our first destination was perhaps the most unique (and nerdy) visit in the form of the tasting room for one of the largest brewers yeast producers in the country, White Labs. 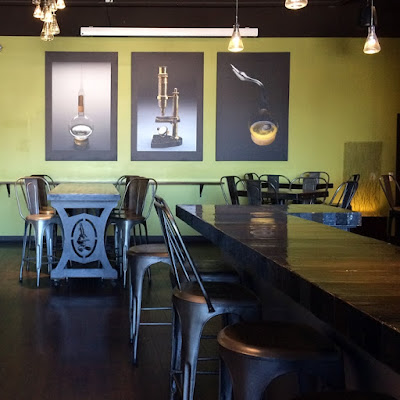 The tasting room at their San Diego is appropriately as nerdy as the company name might suggest. A cutout of the company's logo (a microscope) can be spotted at the end of a long table, Pyrex beakers provide the light bulb cases above, art prints of various laboratory instruments dot the walls, and yeast comparison charts and company history posters are available for your reading pleasure. You could even don your rear-view mirror with a doll of the company's mascot, Yeastman (with his sidekick Buddy) for a few bucks. 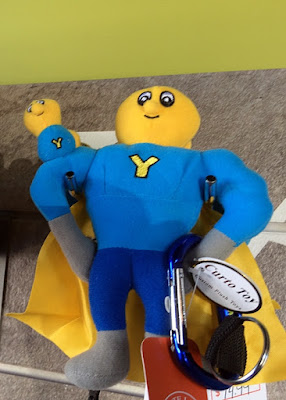 For the average beer drinker, yeast is probably the least discussed ingredient of the big four (hops, water, and malted barley) in regards to the taste of their beer. But as we learned at White Labs, the type of yeast used can have its own effect on the taste of the final product. As was suggested by our taproom guru, the most common and best way to order beer here was to pick a style and order a flight of that style, all brewed with differing yeasts.

We did vary slightly in terms of preferences of yeasts in the styles we chose (my spouse went with Rye Saison, while I coupled the two Breakfast Stouts & Milk Stouts), but did share a mutual disappointment that the Rye Saison with the Leeuwenhoek Yeast was the least interesting of the bunch.  We also had a taste of their so-called "Frankenstout", an Imperial Stout brewed with 96 yeast strains, which actually turned out to be a better brew than one might think. 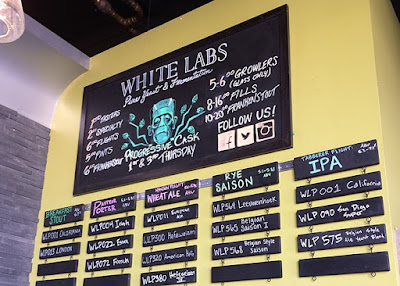 After the true beer nerd experience at White Labs, we decided we wanted to ease back a bit to something a little more low-key and more in line with the nanobrewery type experience. A little pre-trip research found us what seemed to be the perfect candidate for this environment in Longship Brewing, a relative newcomer to both the area and San Diego brew scene in general. 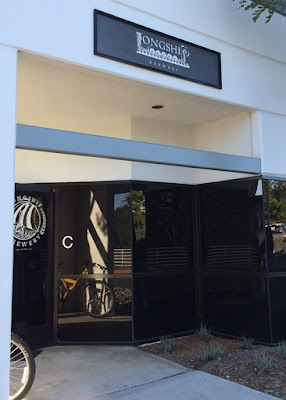 Truth be told, Longship, which opened up its doors to the public in May of 2016, was a bit of a nerdy decision for us in its own right with its Viking/Norse mythology theme. While the interior space really can't escape design-wise from its boxy, light industrial construction (for Columbus residents, think Sideswipe Brewing in the Scioto Harper area), the folks here do a nice job of expounding on their selected theme, dotting the space with appropriately themed murals as well as a collection of mock Viking shields, all made with repurposed waste materials. A long L-shaped bar area and benches make up the interior, and all the usual brewery equipment to brew beer are in plain sight. 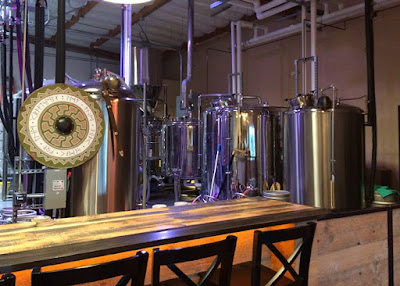 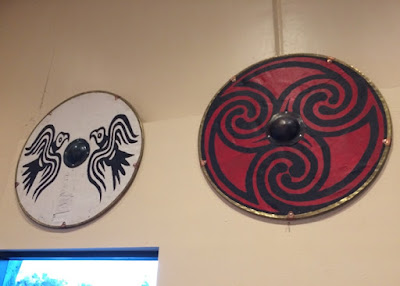 Appropriately enough, the Norse/Viking theme continues onto the beers offered, which include Loki's Wit (a Belgian Witbier), the Balder Brown Ale, and the Funeral Pyre Smoked Porter. With things a little slow on this midweek day, we were more than willing to give pretty much everything a try. 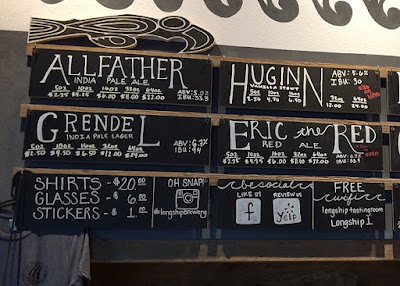 One of our favorite things is conversing with craft beer fans, whether they be seekers of brew like us or the folks in the trenches brewing the beer. On this fairly low-key day, assistant brewer Chuck was happy to chat all things beer with us, including the history of the area, mutual beer experiences and the San Diego scene in general (we were happy to hear that, like Columbus, San Diego tends to have a very collaborative brewing community.)  We even got a special treat when Longship head brewer/owner Dan stopped by with a sample of fresh from the tank Witbier for us all to sample. 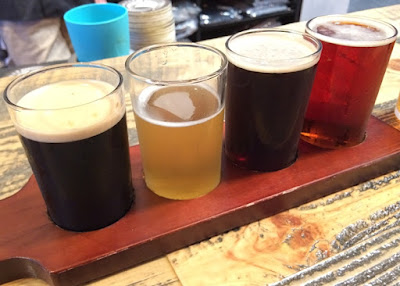 In general, this visit to Longship ranked as one of our favorites with that combo of personal interaction, general theme, as well a pretty solid collection of brews all around (our two favorites ended up being Abomination Strong Ale and Golden Torc Golden Ale.)

As I was on the plane flying home, I began to think of how a brewery like Longship Brewing would do in other markets. I could see it succeeding in a lot of places, including Central Ohio, but to paraphrase a saying, what plays in Peoria may also play in Pataskala but might not in Pacific Beach. With talk of the craft beer boom leveling off in the San Diego area (as exampled by this San Diego Union-Tribune article), I look on with interest to see how a relative newbie like Longship fares in what should remain a highly competitive and well-regarded environment. The eventual result is something I suspect not even Odin's trusted ravens Hugin and Munin could ferret out.