It's impossible to deny San Diego's status as a craft beer mecca: as I type, the region is on the verge of 140 total breweries, While the abundant sunshine that San Diego is known for was more than enough reason for our visit, this particular status provided the proverbial foamy head of affirmation on our "where shall we go?" destination stein.

However, it's easy to forget that, at least by California standards, this area was late to the party. Tom Acitelli's all-encompassing book on the emergence of the U.S. craft beer scene, "The Audacity of Hops", noted for several decades up until 1989, beer choices for the local consumer were either U.S. big beer adjunct lagers or their Mexican counterparts (Corona, Tecate, etc.) As detailed by Acitelli himself, "the craft beer movement...seemed a world away; the odd Anchor (Steam Brewing) tap or six-pack the only glimpse a San Diegan might catch of it."


That changed in 1989 when friends Chris Cramer and Matt Rattner, assisted by cousin/longtime veteran of big beer breweries Karl Strauss (who graciously lent his name to the enterprise), opened their downtown-area brewery to long lines of enthusiastic beer drinkers. With the assistance of fellow influential area craft breweries who came in the 1990s such as Pizza Port, AleSmith, Ballast Point, and Stone (who was featured in this recent blogpost,) this city has emerged near if not at the top of West Coast beer destinations.

Now, deep down, I know there are plenty of places you can belly up to in this city where NASCAR beers rule, with perhaps one or two large nationally distributed craft beer brands available for those more discerning types. However, our anecdotal experiences uncovered plentiful supplies of craft beer at somewhat surprising eateries during our visits.  It got to the point where I posed the question to my spouse, "Can you find a restaurant in the city without at least several tap handles of the larger local craft brewers like Stone, Green Flash, Modern Times, et al?)

Our first hint was at, of all places, Rubio's Coastal Grill, the West Coast-based chain whose calling card is Baja-style fish tacos. Now, fast casual restaurant dalliance in craft beer is not a new thing, but it is still relatively uncommon: Chipotle has dabbled with it around the Chicago area in collaboration with 5 Rabbit Cervecería, and burger-oriented places like Smashburger and Shake Shack have been about craft beer almost from the get go.

Still, it was a bit of a jolt to the system walking into what a place that I've always deemed more fast food vs. fast casual after many years away to find bottled beers from Stone, Ballast Point and Green Flash were available. As someone who wasn't really inclined to get a dull Mexican lager with my Rubio's fish tacos during past visits in the Bay Area, this was a highly welcome development. 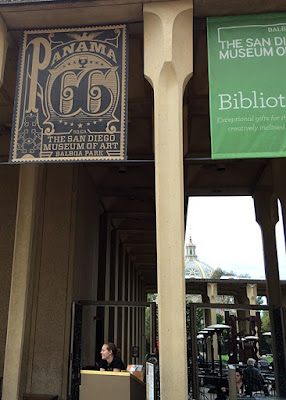 Or perhaps Panama 66, Balboa Park's casual sandwich oriented eatery featuring an outdoor patio area. As it turned out, the menu pricing here, along with other eateries in Balboa Park (more on that in a future post), gets a default captive audience markup (technically, you could leave for an outside the park eatery for lunch, but the hassle probably isn't worth the effort.)  You can ease the bite to the budget a bit with their grab-and-go options, but we didn't notice that until after we left.

For the past few months, this eatery has been remodeling its kitchen, so hot items were not an option on our visit.  Despite this, however, we will give Panama 66 props for making their sandwiches a step up from typical deli quality, with fresh, locally-sourced ingredients and what I've come to call "Ohio-sized" portions. That detail also is directed to the draft beer list, which features a nice collection of strictly San Diego-area brews to sip on with your meal (more selections were listed on the chalkboard next to the ordering kiosk.) 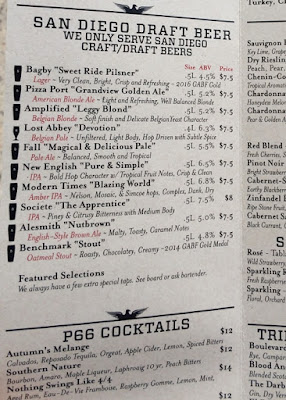 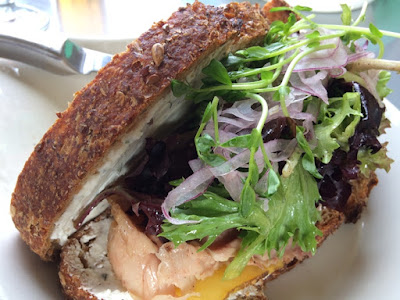 Finally, my spouse's jonesing for some fresh seafood, along with a combined desire to stay casual and avoid big crowds (we typically don't go out dining on Valentines Day for that very reason, but being on vacation changed all that) led us to the casual seafood shack Mitch's. This eatery, which lies pretty much right on the water, is easy to miss if you're not familiar with Point Loma marina area (look for the elevated "Sport Fishing Landing" sign next to a parking lot gate.) 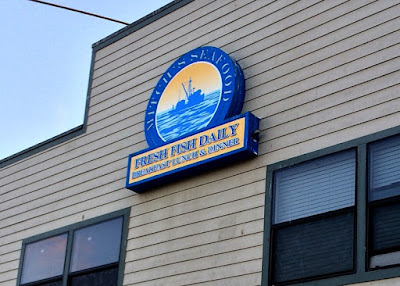 Mitch's website states this eatery was started by three families with a long history of fishing in the Point Loma area; as we discovered, this eatery qualifies as one of those locals-in-the-know types of restaurants. Our instinct was also correct about this not being a fancy pants type place - all you needed was to bring an appetite for seafood. 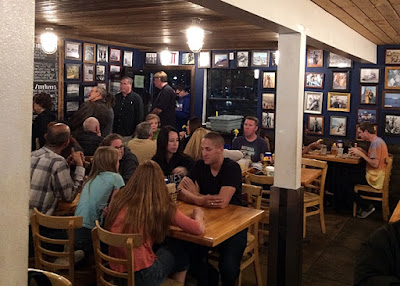 While Mitch's has indoor tables, a warm early evening (for us Midwesterners anyway) made us venture to an outside seat along the deck railing.  It's hard to beat the view as you stare out past the docked ships in the harbor into the bay and beyond, but we did have to be wary of the gulls, who are more than ready to dive in for a quick bite when they see an unprotected plate of food. 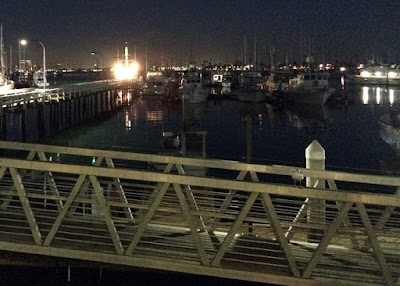 Not surprisingly, Mitch's offers fresh-caught local offerings (on this night,this included Yellowtail, Swordfish and Bass) along with a variety of other fish and seafood preparations, plus a bevy of sides. I will start by saying most of our side items were kind of meh - the slaw that came with my sandwich was average, the onion rings were a bit greasy, and my spouse's side of bread was a little chewy.

But this was more than offset by two other factors. First off, and most importantly, were the mains. The Gold Spot Bass in my sandwich was as fresh as you can imagine, nicely flaky, with the usuals (tartar sauce, cilantro and lettuce) on a tasty torta bun. More impressive though was my spouse's Grilled Octopus, a simple dish with Romesco sauce, accompanied with white bean and arugula salad, that quickly became my spouse's favorite octopus dish she had ever tasted. Perhaps the most divine part of this preparation was the octopus' texture, which was not even remotely rubbery or chewy. 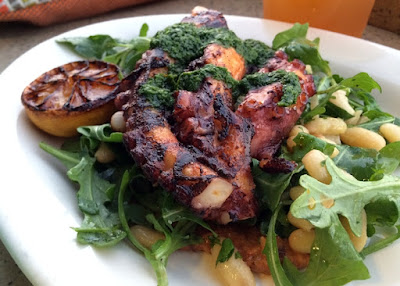 Oh, yeah, the craft beer. To be honest, I was expecting a place to have at best, say, a couple of Stone taps along with a plethora of macro beers. But once again, we were pleasantly delighted to find a diverse inventory of craft brews, including a Northern California entry (Track 7 Brewing) and a Mexican craft lager in Baja Brewing's Cabotella Blonde Ale. Taking in all of the above in combination, plus a conversation with a couple of Mitch's regulars/craft beer aficionados who were more than happy to give us hints of other craft beer worthy places to visit, made this experience more than exceed whatever expectations we had going in. 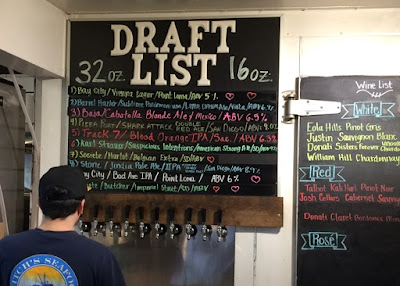