In The Shadow of Giants (Pt. 1): An Oasis for the Heretics

As one travels eastward on Interstate 80 into the Suisun Valley in California's Solano County, a billboard or two may alert the uninformed that Fairfield, the county seat, is home to one of the most famous of candy confectioners in Jelly Belly. As my spouse and I will attest, the factory tour is definitely more than worth the time, with a weekday far preferable as you can see the machinery in full action,

Driving up a little farther up the freeway, this same newcomer to the area may catch a whiff another uniquely sweet smell not too long afterward. The source of this scent is quickly identified - just to the south of the interstate, the sizable structure (700,000 square feet worth, in fact) that is the Fairfield branch of international beer maker Anheuser Busch chugs away, like it has since 1976 and all by its seeming lonesome.

Digging deeper, one will discover that this has not always been the case - the small but plucky brewpub Blue Frog Grog & Grill plied its craft beer offerings for locals in the know starting in 1999, making a solid run as an independent business until the owners sold their business in 2013 (in a somewhat odd twist, the brews have been adopted as restaurant chain Fuddrucker's craft beer offerings in the Bay Area.)

But what Fairfield may have lost in 2013 by the Blue Frog's disappearance it gained back in spades later that year. Some would even say there was a great deal of heresy involved. 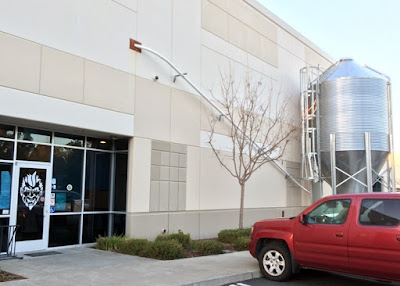 The brewery that would be named Heretic (as described on their website, the name isn't a religious reference but rather a belief, in the brewing sense, of the not generally accepted) was founded in 2011 by husband & wife team Jamil and Liz Zainasheff. Their original digs found them across the bay in Pittsburg (yes, without an "h" at the end), where they initially shared brewing space with another longtime local brewer in E.J. Phair.

However, the demand for Zainasheff's brews quickly outgrew the arrangement, especially after its Gramarye Rye Beer earned the Heretic a gold medal at the 2012 Great American Beer Festival. Seeing Solano County as pretty much untapped territory, the Zainasheffs pulled up stakes and settled into new digs in an industrial park nearby Travis Air Force Base on the north side of Fairfield. 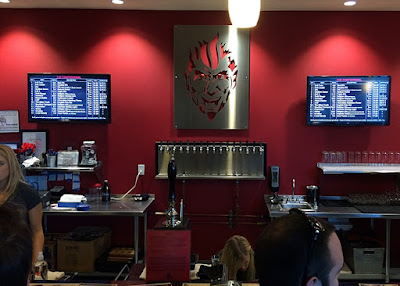 Heretic's taproom is a fairly simple setup with a nice splash of color along with some modern touches (flat screen television screens with taplists acting as bookends for a die-cut of the brewery's logo) and the usual touches like an assortment of games and souvenirs. The loading dock space next door offers some spillover space for busier times as well as an ideal place for local food trucks to cook up their goodies (on this day, the lovely smell of tri-tip from Buckhorn Grill proved quite tempting.) 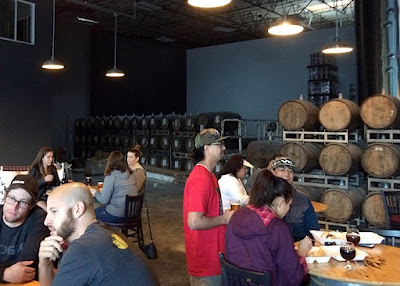 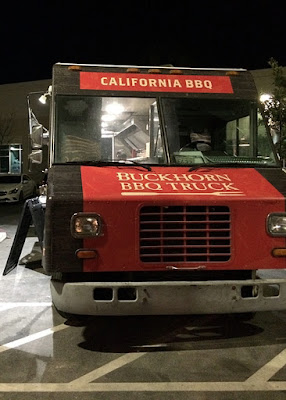 Having already been acquainted with Heretic brews like the Gramarye (we're both very fond of rye beers in general), Shallow Grave Porter (right up my alley) and their Evil Twin Red Ale (a nice balance between hoppy and malty), we were eager to venture into some previously untried brews such as the Incubus (a slightly above average Imperial Stout) and Cruel Beauty (almost as enjoyable as the Shallow Grave).

As it turned out, our mutual favorites this night turned out to be the then just-released Evil 3 Triple IPA (very smooth and a much more balanced affair than its stated 100 IBU rating might lead you to think) and the Worry Belgian Tripel, which is given a nice dry and fruity kick from the chardonnay barrel aging.

Judging by the level of upgrading and construction we spotted as we were sipping our brews, the future is looking quite bright for the Zainasheffs. This notion was pretty much cemented as we left for the evening, as we spied a public notice on a facility door indicating that Heretic was in the process of receiving a California distiller's license. If those efforts progress well, beer goggles may not be in the cards in our next outing with the heretics of Solano County. 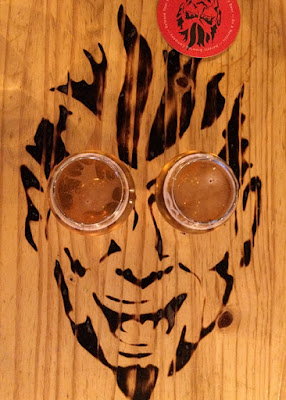