Nowadays, Columbus' craft brewery roll call numbers closer to forty, but even combined they almost certainly don't compare volume-wise to the local Budweiser plant's roughly 10 million barrels of production in 2015, according to this Dayton Daily News article.  Perhaps it's only appropriate that the Columbus craft brewery within closest stone's throw of the city's "Big Beer" representative comes at the term from a completely different direction.
"Zaftig" is a German-Yiddish term that translates roughly to "big-bodied" and "pleasantly plump", and indeed this brewery's beers have striven toward the larger, more bold side of the spectrum. In fact, none of their brews rates lower than 7.0% on the ABV scale. My spouse and I first encountered this in person first at the 2015 Columbus Winter Beerfest, where their coffee and chocolate-based Bam-Ba-Lam Stout turned out to be our favorite brew that night.

Not surprisingly, Zaftig's big beer focus meant it stood as one of the bigger Ohio-based beneficiaries of the 2016 state repeal of beer ABV limit under House Bill 37. Perhaps equally as unsurprising, Zaftig was one of the first state brewers to release a beer that exceeded the old 12% ceiling with their 16% Ol' Harvey Russian Imperial Stout. 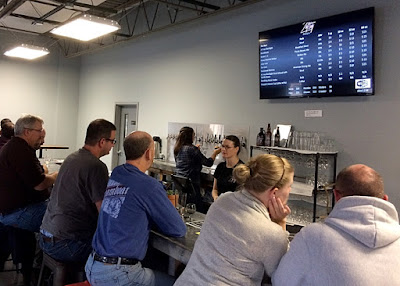 Despite its hefty brews, Zaftig started off in 2014 about as nano- as a nanobrewer could be in a rather cramped industrial park space on Schrock Road in Worthington. In May 2016, a space more conducive to brewing larger quantities opened up even closer as the crow flies to their "big beer" brethren in Northpointe/Busch area, where the confluence of Worthington and Columbus industry blends together. 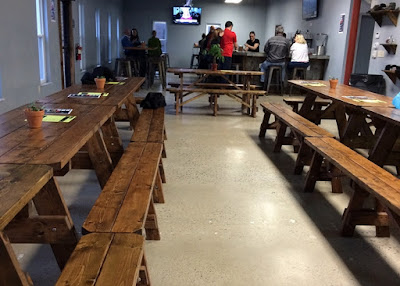 While the interior of Zaftig's new space may not be anything fancy compared to many, that valuable commodity of extra operational space has helped out immensely. Here, picnic-style benches make up a vast majority of the seating outside of the bar area, making for a perfect platform to bring in food from the brewery's regularly scheduled mobile food units (the de rigueur model of food service for many area breweries) such as the Put It In Your Face sandwich cart and the Broke Johnny food truck

The increased production capacity found here (from 150 barrels in 2015 into the low-four-digits in 2016) has also paid off in availability, as their beer has made their way into Northern Ohio and a wider audience in general.  A glass partition allows visitors to peek at the brewery's production area and get a glance, if you're lucky, at their brewery mascot (Hops the cat) keeping tabs on the grounds. 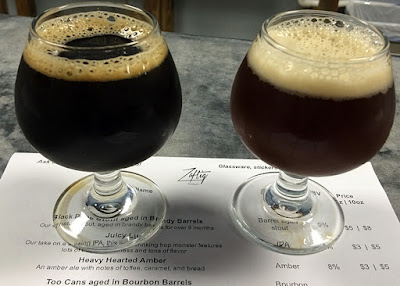 It's not surprising that the brewery has "bigger" plans for the future as they approach their third anniversary this month; not unlike their high-gravity brethren up in Akron Hoppin' Frog, Zaftig has visions of having their bottles of their big brews available at more locations throughout the state, as well as plenty of barrel-aging, something that works well with their typically high-gravity brews.

And while these brews are neither ideal for mass quantity consumption (unless you have some high-level grudge with your liver or something) nor production (their "big beer" neighbor just over the wall may very well spill more beer than Zaftig ever produces in a year), Columbus' beer scene has proven over the past couple years that there's more than one way to make for a successful brewing operation. I suspect that "big beer" and "big beers' will go along their merry yet distinct pathways in this little corner of the metro for the foreseeable future.