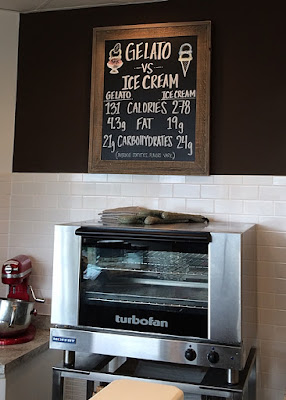 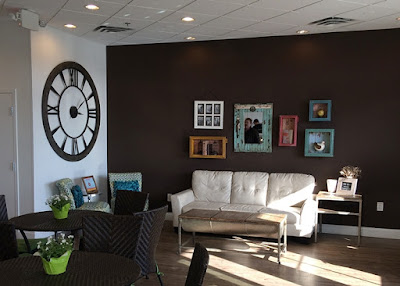 Open in July 2014, Coppa has been a popular destination, residing in a heavily retail-oriented section of Westerville where Polaris Parkway, Maxtown Road, and State Street intersect. Their interior space doesn't hurt either, combining their gelati bar with catalog-worthy interior furnishings and decor, plus an outdoor patio for the warmer months. It's an optimal place for kicking back and hanging out. 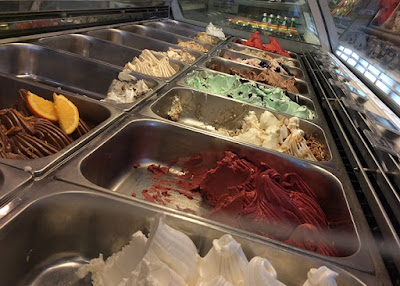 Coppa is a family affair and a dream for owner Linda Warns-Davis, who had always wanted to own her own ice cream shop. The training she pursued beforehand in Italy and at Penn State has served the business well. In-house produced gelato and sorbet creations regularly enter and leave the shop's rotation, complimented by a focused selection of Italian-oriented cakes, pastries and coffee.

Not unlike most craft beer breweries, Coppa offers up flights, as in flights of gelato. The concept is pretty simple: choose four of the flavors you'd like to sample, and your server places your scoops in separate serving tins and spoons on a smart-looking wooden serving board, the latter of which only adds to the temptation factor. 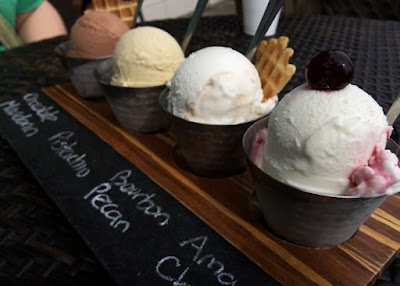 We haven't gotten through all the flavors yet, but we have found them all to be quite well made, with a clear standout so far being Pistachio. Aside from our incredibly heavenly pistachio sorbet we had from the long departed and sadly missed Scream Sorbet in Oakland, this is by far our favorite pistachio-flavored frozen confection we've encountered. A nice runner-up has been the Chocolate Mandarin, with a distinct orange tang on a nicely bittersweet chocolate base.

Perhaps the most intriguing thing that Coppa Gelato sports on their menu is their Gelato Bomb, created by placing a scoop of your favorite flavor of gelato inside a sliced, beignet-style donut.  I first sampled such a creation back in the Sacramento area of California (where this type of creation, typically with ice cream, has become a regional specialty) with The Parlor. That turned out to be about as decadent a sweet creation as I can imagine, but I didn't think it existed in the Columbus area until Coppa informed me otherwise.

I'm thinking this would be a perfect future refueling reward for a good long bike excursion on the nearby Ohio-to-Erie trail. Or maybe my spouse and I will just decide what the hell, why don't we wreck the diet for a couple days for fun. I'm sure either way, Coppa will welcome us...and you all the same. 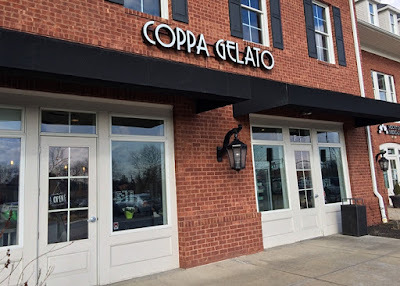