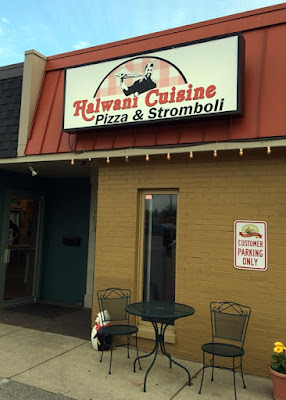 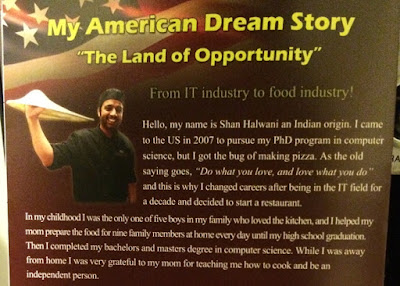 If you grab a menu from this pizzeria, you can learn about this pizzeria's namesake, Shan Halwani. In short, Halwani grew up in the world of computer science and IT, but a combination of childhood interest in his parents' cooking and a trip to Italy gave him the pizza-making bug. It wasn't an easy transition, but hard work and persistence (and a little help from family) allowed him to open up his own shop in 2011.

The eatery is easy to miss as well. People driving through this area looking for a dining option are more apt to spot popular nearby destinations like Sweet Carrot, Aab Indian Cuisine or Mazah Mediterranean. Halwani lies off on a side street: even its menu sandwich board is placed not on a more visible spot on the main drag of Grandview Avenue but rather right in front or the store.

As you come in, your glance is drawn toward Halwani's menu board above the ordering area, It looks pretty standard-issue with selections of typical pizza, subs and stromboli, but then your eyes are catch the phrase "Authentic International Recipe" and things get interesting. 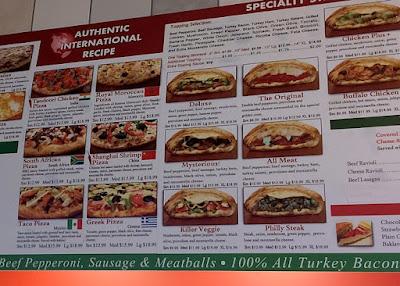 Bracketed with properly attributed international flags, the selections grow more interesting as you scroll from the bottom. The Taco Pizza and Greek Pizza are kind of what you might expect, but then you find your mind trying to wrap itself around the ideas of what a Shanghai Shrimp and Royal Moroccan pizza pie really is.

Also, you might not notice the very bottom line that mentions pepperoni, sausage and meatballs...until you see at the end that the bacon, ham and salami are all made from turkey. You double back and notice that the first items are all made of beef (if you haven't guessed, Halwani uses no pork products in their dishes.)

The glass case directly in front of you does its best to distract as well - huge triangles of baklava, neatly frosted cupcakes, and eye-pleasing macarons make you wonder what other surprises might lie in store here. 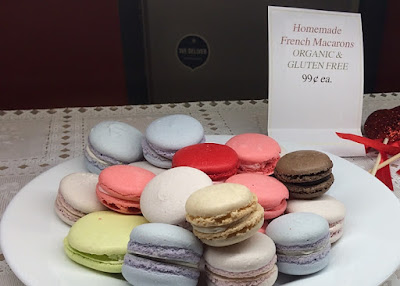 We opted for the Tandoori Chicken and South African pizzas and decided to dine in. Halwani's small space is definitely more geared toward takeout: a steady stream of people came in to pick up their orders as we awaited our order.  In another bit of interesting, a giant teddy bear gave people the option of getting in some hugging practice while they waited (or you can simply glance at the numerous "Best Of" awards and positive press clippings behind it.) 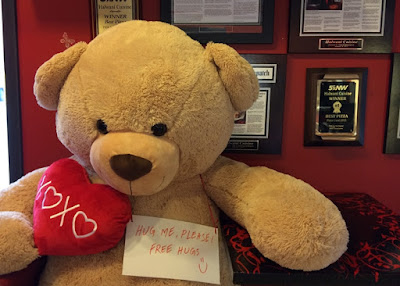 Our pizzas came in a timely fashion, and neither one overplayed what they promised to their benefit. The Tandoori Chicken pizza sported a tomato sauce blending several Indian spices, tender chicken chunks, and a slowly building but never overwhelming heat.  Meanwhile, the South African pizza came with a pleasantly sweet BBQ style sauce topped with a nice blend of cheeses and chunks of grilled steak. The unifying factor was the tasty cornmeal sprinkled crust: it reminded us of those from pizzas we've had at places like Forno and Harvest with a nice crispy, blistered edge, but with a more puffy interior. It's also a very sturdy crust with a good chew, helping make these pies a satisfying cold pizza experience as well. 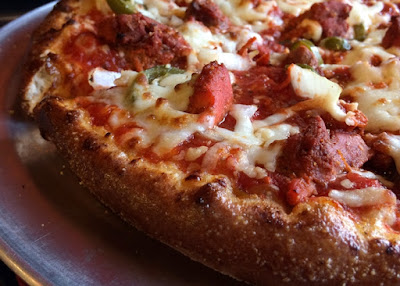 As others have noted in social media site reviews, the owner Shan is a friendly guy - sure enough, he came out to say hi with a big smile, asking how we were doing and how the pizzas were. It was a nice little finishing touch to our dinner that night, and was more than enough incentive to drop by in the future to sample more of Halwani's wares.