The tale of Middle West Spirits has been told numerous times in local, national and industry-oriented media sources. But Brady Konya, company co-founder and our host this day, relayed this tale with an earnestness and enthusiasm of a newcomer, not one who's been in the business for nearly a decade.

The tale is really no less fascinating today: in summary form, Konya and fellow co-founder Ryan Lang move to Central Ohio, meet, and mutually strike up what seems to be a crazy idea. Combining their advertising, tech and sales skills with a big knowledge assist from Lang's relatives (who happen to have four generations worth of bootlegging experience to fall back on), the pair decide to open up a fairly rare concept in a micro-distillery (when they opened, only 50 were in operation around the country) in a state with decidedly disadvantageous liquor production regulations (mainly in the production cap of a mere 10,000 gallons) in an area of the Short North that back in the day was still very much in flux.

Our tour this day gave us a view of the facility as it was nearing the completion of their third expansion. Even if you had never seen their facility in its previous iterations, it was easy to see that Middle West has grown up quite a bit from humble beginnings. 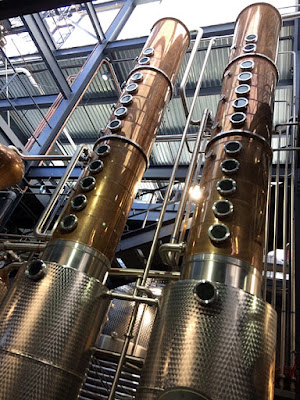 When one isn't being lulled by the sweet bakery-like smell, a tour-goer to Middle West can't help but be drawn to the sheer height of the space. The restrictions in space to build outward meant the distillery had to build upward to expand production. This aspect played a large part as to why the project ran longer and cost more than planned, mainly due to what Konya called "unsexy" stuff such as foundation strengthening to handle the larger, heavier equipment; enhanced safety and drainage; and improved water conservation and other process improvements. 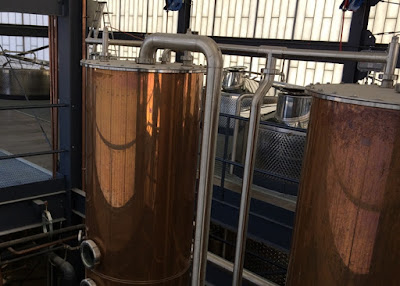 Not that there isn't a little sexy built into the facility - the next level up sports a translucent material normally used in airport terminals, promising a transfixing sight for passers-by when the distillery chooses to light this space during the evening hours. Konya added that if things work out, the development of an even higher level in the facility that, if built, promises to provide visitors one of the more unique panoramic vistas in the city.

In 2016, the Ohio government lent a helping hand the state's micro-distillers when House Bill 351 was signed into law. The bill provided a tenfold increase in the production cap for micro-distillers as well as allowed them to operate like brewpubs with onsite food and drink service. Unsurprisingly, Middle West has jumped on both aspects with a requisite growth in production and by recruiting a familiar face to Columbus diners (former Veritas Tavern chef Avishar Barua) to get their restaurant concept running. 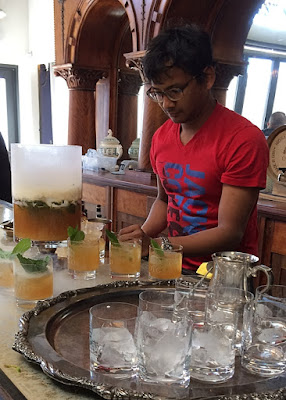 Barua, as it turns out, is equally as enthusiastic about where the distillery is going. He not only showed he knows a thing or two about the liquor making process, taking over the tour guide reins at times, but also gave us tour-goers a small hint of what diners in general might expect in the form of a cocktail, turning the making of a (very tasty) Bourbon Smash into a show by adding some liquid nitrogen into the mix.

Speaking with Barua near the tour's end, I got a feel for what excited him the most about the new restaurant. He shared that he wanted to bring back the modernist cooking techniques he encountered in New York while working at restaurants like Mission Chinese and WD~50. However, Barua clarifies that whatever method he may use, whether it be sous vide, liquid nitrogen, or similar, he will not use it simply to be flashy. His desire is to make your food's taste and texture the best it possibly can be.

Of course, we can't write this post without mentioning Middle West's calling card in their OYO-brand spirits. These spirits, which continue to gain acclaim on a world-wide basis (such as the 2016 Berlin International Spirits Competition), were something we had encountered in various cocktails through the years, but tasting them in their pure form made me think of these spirits in a whole new light. 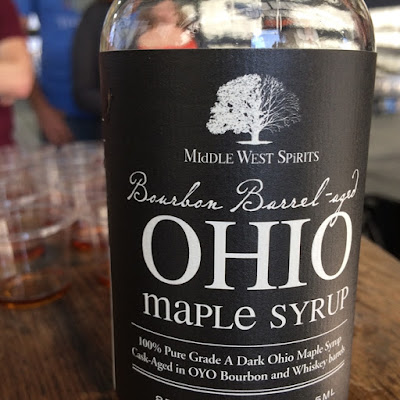 From the vodka (a spirit with some actual taste(!), especially when contrasted with the more typical and very popular neutral vodka they had available for comparison) to their more newly released Vim and Petal gin (with a beguiling mix of botanicals, including Szechuan peppercorn) to the luxuriant Bourbon Barrel-Aged Ohio Maple Syrup, we found something to recommend every thing we sampled (and a few things from their gift shop to refill our liquor cabinet.)

At the end of our tour, the sense of excitement and anticipation I got from the Middle West staff was palpable, and I must say a bit enlivening. Not only do they have a highly anticipated restaurant (no firm opening date has been set as of yet), but also have expanded their partnerships and associations both domestically and locally, as noted by their recent partnership to produce the sake-infused spirits of fellow distiller Karate Cowboy.

In many ways, it reminds me of the time I relocated to the Buckeye State, when the first members of the second wave of local craft brewers such as Four String, Seventh Son and North High were staking their claims. Passion for craft beer has carried the local brewery count to around 40, and while the distillery numbers may never match up with their brewery brethren (Konya mentioned the country's craft distilleries numbered close to 1,300, compared to roughly 5,300 craft breweries) I am pretty confident we will see a similar community enthusiasm for Middle West and other area distilleries, both current and future.

Konya also noted that he and his business partner's retirement plan, as such, was the distillery itself. They were never in it to sell their venture, and that they were "all in" on taking their creation as far as they could take it. And while there may be some doubt about those retirement nest eggs now, I suspect those involved with this distillery will be sleeping better in years to come. Middle West's halcyon years have yet to arrive. 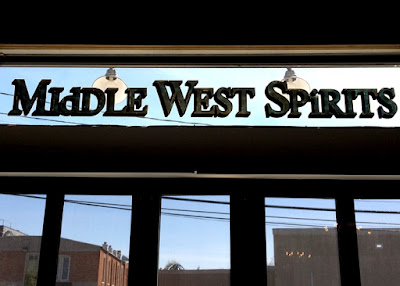 Middle West Spirits' bottle shop hours are open Wednesdays through Saturdays 12 noon to 6 PM. Tours are available to the public for $10 on Fridays and Saturdays for $10, with an optional tasting flight available at the tour's end.