What would become Lima Ohio's Great Black Swamp (GBS) Dulcimer Festival originated in the late 1970s from the mind of Michael Wildermuth, a long standing dulcimer player and faculty member of what was then known as OSU-Lima Technical College (now known as James A. Rhodes State College.)  As noted in this 2014 Lima News (via LimaOhio.com) article recalling the event, the first festival in 1979 started off in relatively modest fashion: "Two hundred people attended the first festival, which included entertainment from (well-known dulcimer performer Maddie) MacNeil and the Dulcimer Alliance, Wildermuth’s band."

Even during this first year, the festival may have been considered to be an accomplishment in itself, an event that could, with luck, become a mainstay in the area. As it turned out, Wildermuth found the perfect partner for bringing his vision to life in OSU-Lima Professor of Music Susan Porter, and her dynamic talents transformed this beginning spark into something much, much greater.

A reading of Porter's entry in the Ohio Women's Hall of Fame (she was nominated in 1992) speaks volumes about her talents. It probably should have been no surprise that the festival she eventually took directorship over in 1984 would expand to unimaginable heights..  As noted in this letter by her colleague at the University of Colorado, Professor Emeritus William Kearns, the festival by 1990 had outgrown the Lima campus and attendance had to be "limited to 1,000 participants from 26 states and Ontario, (plus) 7 concerts, 146 workshops, and 33 vendors and exhibitors."

Sadly, Porter was diagnosed with cancer in the late 1980s, and her battle with the disease eventually took its toll this festival's driving force. 1992 would turn out to be the year of the Great Black Swamp's last hurrah, As noted by the Lima News on April 19, 1992, “Get out the herbal tea and toss on a little something calico. The dulcimer players are coming to Lima in swarms. Hundreds of dulcimer players — along with an ample portion of guitarists, fiddlers and the occasional autoharpist — will hit town Friday for the 14th Great Black Swamp Dulcimer Festival at Lima Campus.” Porter herself would pass away 18 months later in October, 1993.

"That was a long time ago," mused Marji Hazen, lifelong member of the Columbus Folk Music Society and longtime volunteer at the original Great Black Swamp Dulcimer Festival.

While specifics may be a bit hazy now (after all, the festival's finale was held over a quarter-century ago,) Hazen, who was kind enough to share some her insights via e-mail, knew of the festival's importance and standing in the dulcimer and folk music scene in general. "(The Great Black Swamp Dulcimer Festival) was one of the best dulcimer festivals in point of content, teachers, and attendance," she reiterated.

The loss of the festival left a huge gap in the music performance calendar, and Hazen was highly involved in transitioning the Porter's creation into what was originally dubbed The Central Ohio Dulcimer Festival (now known as The Central Ohio Folk Festival (COFF.))  Hazen emphasized that the new gathering was never meant to be an exact duplicate of the original. "I don't think anybody had in mind to replace Black Swamp, but just cadge its unused weekend...GBS was one of a kind, impossible to duplicate with Susan's imaginings of what it needed."

Like the original GBS Festival, the first COFF festival began modestly as a one-day event co-sponsored by three different organizations and drawing 250 people. Organizers soon realized that a transformation of the event was needed to ensure its growth far into the future. "(We) originally focused on dulcimer music, which was supported by the Columbus Recreation and Parks Department for many years even before that, but through both natural processes and official recognition of local desires, it has evolved into an all-inclusive self-supporting folk festival," recalled Hazen. 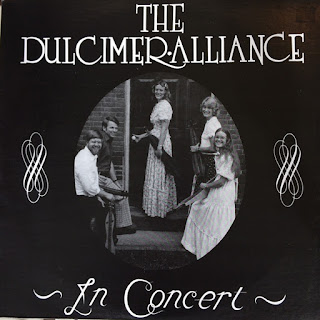 Of course, let's not forget what started the journey into this fascinating back story (one that I am quite keen to follow up on in the future.) As mentioned earlier, Michael Wildermuth's band The Dulcimer Alliance was featured at the very first festival. and was a regular performer throughout the festival's run. The Vinyl COHvers featured album in this blog post is the Alliance's second, "The Dulcimer Alliance In Concert."

This album was recorded roughly a year before the first GBS festival at the Lima Playhouse and exactly 38 years from the date of this blog post on April 29, 1978. As noted in the liner notes, the band "originated in 1973 as a group of people interested in learning how to play the mountain dulcimer" and despite numerous changes and additions "had never ceased having a wonderful time."

If nothing else, the Alliance comes across completely at ease in their craft, with a fair share of playful banter with each other and the gathered audience.  They traverse mainly traditional folk standards with skill and energy; in addition, the songs aren't strictly dulcimer-related, as other instruments like banjos and guitars are heard in several tunes, while others are done a capella.

I personally found the album a fun listen from beginning to end, and I just picked out four songs that I felt represented a good cross-sample of what you'll on the entire album.  I hope you enjoy this music as much as I did.

Odds and Ends: Maddie MacNeil, who was mentioned earlier in the blog post, has her own recollections of the Great Black Swamp Dulcimer Festival at her website madelinemacneil.com.

While the Dulcimer Alliance has ceased as a performing band from what I can figure, Michael Wildermuth and his wife Sharon have continued performing as The Conkers at various events. The Lima News captured them performing songs of the British Isles at the 2015 Lima International Expo.

The Ohio Women's Hall of Fame (somewhat oddly under control of the Ohio Department of Job & Family Services) is currently in limbo, as I found out when I visited Ohioana section of The State Library of Ohio in Columbus. The young librarian I spoke with that day said there are ongoing discussions to transfer the collection to an organization more suited to do justice to the display.

The 21st Annual Central Ohio Folk Festival is scheduled for Battelle Darby Creek Metro Park on May 6-7, 2017. All festival activities are free save for classes and the Saturday evening concert featuring John Gorka & The Wonder Hills. For more information about the festival, please check out the Columbus Folk Music Society website at www.columbusfolkmusicsociety.org.

Finally, special thanks to Diane Boston and Marji Hazen of the Columbus Folk Music Society and Dan Landrum of Dulcimer Players News for their assistance.
Posted by Joe