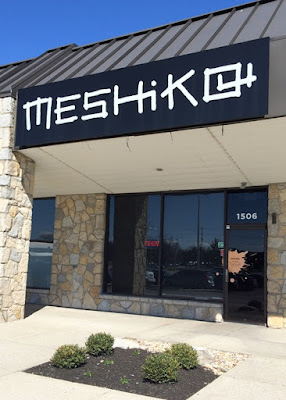 For awhile, the ramen-focused eatery was one of the hottest food concepts to waft up within Columbus' culinary bowl.  Places like Jobu/Mashita, Fukuryu and Menya; and food trucks like Tokyo Go Go and Capital Ramen, joined old-time brick-and-mortars like Tensuke Express and other Japanese eateries within the metro to give locals many more choices than ever before. Toss in the speculation of a possible local branch of a Cleveland institution in Jonathon Sawyer's Noodlecat, and the enthusiasm might have been seen as scalding at times.

The talk of the latter has pretty much descended to nothingness, and with an occasional rogue wave (Tensuke's expansion and the relocation of Menya from Powell to Dublin), the ramen scene here has settled into a steady lapping of broth upon the side of the bowl. That seems to have suited the city's current collection of ramen purveyors, including the Northwest neighborhood's Meshikou. 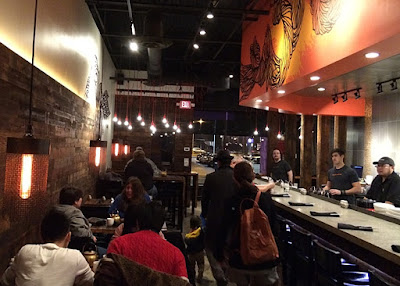 Meshikou's strip mall location might scream hole in the wall, but this hole is actually quite a stylish one, with plenty of reclaimed wood, a long bar, and splashes of dark reds and oranges.  The lighting is kept fairly dim, making the trip-hop/jazz/lounge music I've heard on most of my visits rather appropriate.

Opened in 2014 by owner Mike Shek, Meshikou's menu has evolved more than you might think for a ramen shop. Other than the addition of adult beverages (they don't have the biggest selection of adult beverages, but do offer just enough local craft brews, select imports and sake to satisfy most needs,) the biggest change happened in 2016. As detailed in this Columbus Monthly article, Shek took pork-based tonkotsu broths off the menu (due to a bone shortage; Meshikou has always made their broths from scratch) to the lighter, chicken-based paitan. We had been big fans of their tonkotsu since they opened, so we ourselves were interested in sampling itself in recent visits. 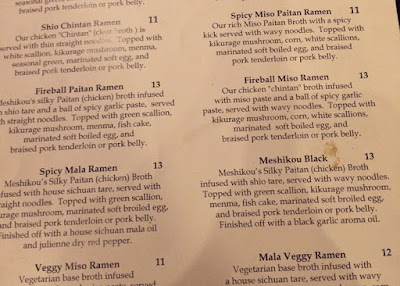 Neither of the broths we had on this visit had that rich tonkotsu mouthfeel like we've enjoyed in the past, but these were still more than worthy bowls of ramen. My spouse's Mala Veggy Ramen had the requisite numbing heat quotient, providing a nice kicky variation on the eatery's Veggy Miso Ramen, which we have enjoyed in the past. 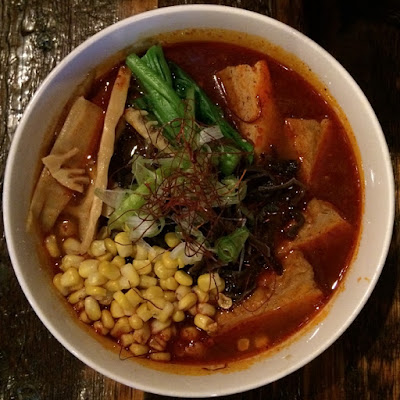 My bowl of ramen was less spicy but equally satisfying: the Meshikou Black puts the usual grouping of ingredients with either pork belly or tenderloin (I chose the latter) with the paitan broth. The addition of black garlic aroma oil provided the constant within this melange of textures and tastes. 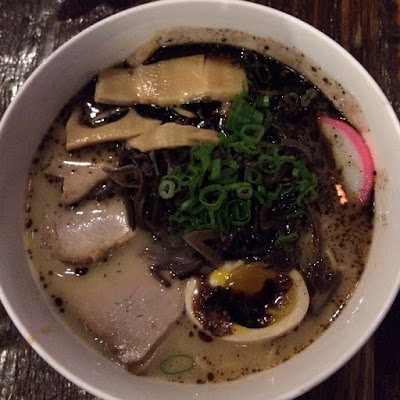 Meshikou has a solid set of appetizers, some of which can easily sate those with normal appetites. Their open-faced Barbecue Chashu Buns are on the sweet side due to the glaze used, but that sweetness seems toned down from what had been the case in the past (a good thing, in my humble opinion.) Also, this eatery does chicken quite well, from their Karaage (marinated chicken flash fried) to their variety of wings, which are generously sized and quite juicy.' 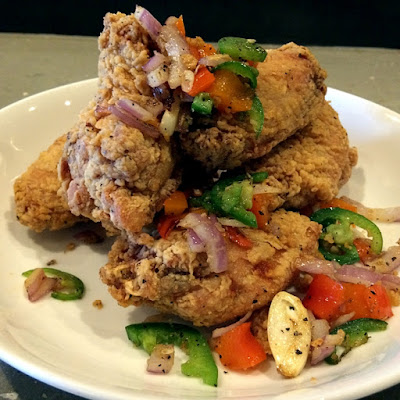 As explained on an interior wall, the restaurant's name derives from a Japanese phrase "meshi ikou", which translates roughly into grabbing some friends and getting some good food. To be frank, that sounds like a great idea almost any day of the week, and Meshikou is most certainly qualified as a place to fulfill that notion.