Driving northbound on State Route 257 through the northern portions of Dublin, Ohio, one might spot one of those numerous state historical markers along the roadside (according to the Ohio History Connection, 1,500 such plaques dot the state.)  As you're generally driving at a fairly fast rate of speed by the time you reach this marker, the thing the might catch your eye is the lack of anything remarkable as you zip by.

If you do stop and take a look, you will learn that the lands you're traveling through once belonged to a Revolutionary War patriot with Polish roots, General Thaddeus Kosciuszko. As written on the marker, the site you are standing on "marks the northern boundary of the "Kosciuszko Lands"", which was given to him by the government of the United States as payment for his work in constructing the defenses for the Delaware River. Interestingly, what is considered Koscuiszko's most important contributions to the country happened years after the war when he designed the fortifications for West Point.

Of course, many people in the area also this road as one of the main roads leading to one of the top attractions in the area in the Columbus Zoo. Not that I have proof, but I suspect only a select number of folks veer left on Glick Road before the road curves toward the zoo, and even fewer folks veer right onto State Route 745 after Glick crosses the Scioto River to head into the sleepy little village of Shawnee Hills. It is here where the relatively obscure ice cream shop named Dell's resides. 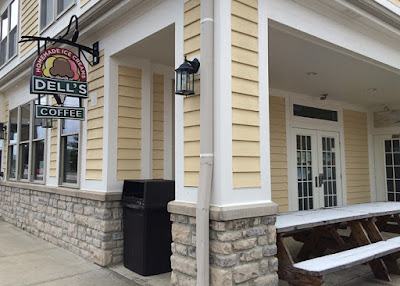 The building which Dell's resides is fairly easy to spot (a yellow and white two-story retail complex on what appears to be faux-stone foundation) but considering its relatively remote location, I wondered a bit about how Dell's was able to make ends meet. I got a first clue of that on arrival in the form of a drive-thru lane. While I thought this was a bit odd for an ice cream place, a closer look at the menu board revealed menu items that made more sense such as breakfast sandwiches, pastries and coffee. I also noticed that people looking for a dinner option also can drop by to see The Ribman, whose food trailer sets up in the parking lot every Thursdays.

This non ice-cream-option theme continued on the inside, where I discovered this shop had a connection to Amish country in the form of Der Dutchman baked goods, available every week Thursdays through Saturdays. 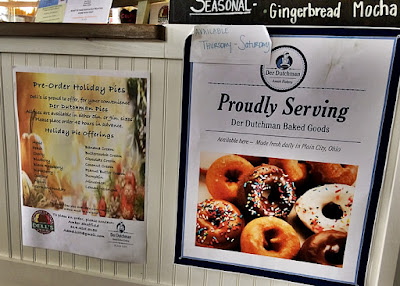 Dell's interior is bright and cheery, sporting a relatively compact seating area as compared to the space behind the counter, part of which seems devoted ice cream production. The display case sports 16 of its small-batch, homemade flavors, with one devoted to the store's declared flavor of the month,. The menu also sports the typical sundae and shake options as well as the recent addition of ice cream sandwiches. 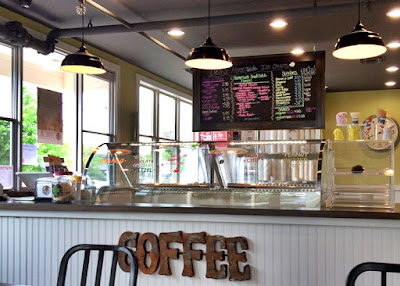 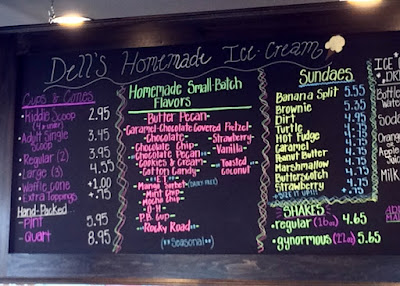 I've tried several of the flavors and generally speaking they're all pretty solid creations, but they lack that subtle oomph that makes the creations from folks like Jeni's and Graeter's stand out. However, I will say that texture-wise, Dell's confections may actually be the most definitive of that chewier, almost taffy-like texture that defines the East Coast Style of ice cream (a style that I have grown to appreciate) that I've encountered here. Toss in all the little extras mentioned previously, and sprinkle it with what seem to be fairly pocketbook-friendly prices, Dell's rates as a pretty good deal overall for the ice cream seeker. 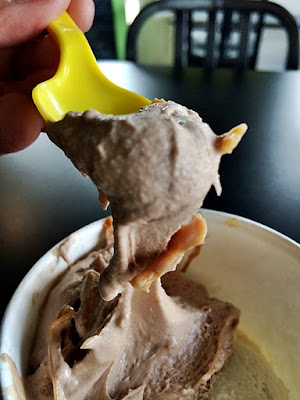