Return to the Trails (Pt. 2): Ales for What Ails You (The Downtown Fresno Ale Trail)

Earlier posts from this current "Return to the Ale Trails" series:
Part 1: Jumping Onboard The Trail Train - Newcomers to the Scene

Part 1 of my original 4-part Ale Trails series (written in November 2016) can be found here.

What if I told you that an ale trail was the key to relieving the economic ails of a downtown?

As written, that question is a bit overstated. But come fall of this year, a prominent California city is poised to see just how far beer can them in their continuing downtown revitalizing efforts.

While I have said in the past that, for me, the capital of California, Sacramento, shares the most similarities to my new Columbus home, its neighbor to the south, Fresno, sports its own interesting parallels. For instance, the general sports landscape in both cities centers around its college football team; in fact, Fresno and its love of its Bulldogs may be the closest thing you get in California to the college football game day hoopla in cities like Columbus and similar big college football towns more commonly found east of the Rocky Mountains.

In addition to sporting professional Triple-A level Minor League Baseball teams (the Clippers and the Grizzlies), both cities find themselves as pro sports loyalty battlegrounds due to their central locations within their respective states. Cleveland and Cincinnati pro teams battle for attention in Columbus, while Fresno residents are mainly divided between San Francisco and Oakland to the north and Los Angeles and soon, Las Vegas (with the impending move of the Raiders) to the south.

Other interesting parallels include their unique ethnic concentrations in Columbus' Somalis and the Fresno-based Hmong (interestingly, both cities share their distinction with the Minneapolis/St. Paul area in Minnesota) as well their "flyover country" status. In Fresno's case, though, I have a feeling it's more a case of lying in "drive by country" - most travelers going through the area stay on the main north-south artery, Interstate 5, which lies an hour or so to the west of Fresno.

Similar to Columbus and other major cities around the country, Fresno had seen a decline in its downtown area, mainly spurred by the World War II baby boom and the subsequent flight to the suburbs. Interestingly enough, Fresno officials have recognized their own role in this phenomenon. As noted in this The Atlantic magazine article delving into the Central Valley's second-largest city, then-Mayor Ashley Swearingen's response to the author's mention of sprawl was a telling one: "I'm not sure I'd use the word victim. We were the perpetrators!"


However, this recognition has been a positive one in that city officials knew they had to take strong measures to reverse course and revitalize their downtown. Established in 2011, the Downtown Fresno Partnership has used a series of government initiatives, garnered private sector and community involvement, backed a series of business and educational programs, and established regular downtown community events designed to help restore the area as the city's central hub. Officials will admit there is still a ways to go, but almost everyone will agree that the trend is a positive one. 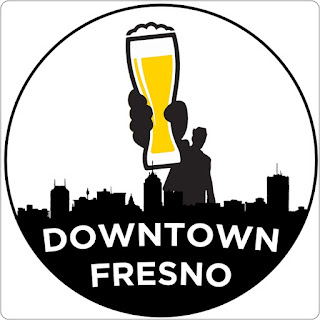 Perhaps the newest and most unique of these programs puts forth something unique to sustain the momentum: craft beer, in the form of the Downtown Fresno Ale Trail, set to launch in Fall 2017.

While craft beer was not a specific focus of Columbus' recent and ongoing downtown revitalization efforts, the strength of Columbus craft beer scene certainly hasn't hurt. What was a minimal city brewery presence when I moved over here at the end of 2011 (six breweries inside city limits, plus four in surrounding towns) has become a healthy forty or so throughout the region with the opening of Loose Rail Brewing in Canal Winchester in early May, with several more in the pipeline.

Interestingly enough, this fact is not lost on the Aaron Blair, current President and CEO of the Downtown Fresno Partnership. Blair, who was kind enough to answer my questions related to his city's ale trail, sports his own Central Ohio ties as a native of Whitehall and a student of Architecture at The Ohio State University. Even now, Blair admits to keeping up with all things Columbus, including craft beer - his favorite breweries are a mix of old-school (Barley's Ale House and Elevator Brewing) and newer arrivals (Actual Brewing and Buckeye Lake Brewing.)

Blair: The craft beer movement is a relatively new idea for Fresno, at least for downtown. The City of Fresno has really embraced the impact an established brewing culture can have on a city. To open a brewery in downtown Fresno, brewers receive a price break on application fees and can save as much as $8,000 compared to opening elsewhere in the city.

Q: From what I've read, the current craft beer scene in Fresno appears to be a highly collaborative one, anchored by Tioga Sequoia Brewing (whose beers I've seen at various locations during travels through California.)  Would this impression be correct, and what role has T-S played in getting the ale trail going.

Blair: Tioga-Sequoia Brewing Company officially landed in downtown Fresno in 2010. Their company name, the names of the beers, and even the events they choose to host, all reflect a pride in this region, this city, and the history of both.

In a way, this has become a benchmark for others. Full Circle Brewing Company actually opened before Tioga-Sequoia - in 2000 in a warehouse in Chinatown. Last year the business was purchased by partners new to the craft beer scene, bringing new life to a Fresno institution. Having these two breweries in place has anchored Fresno’s craft beer industry and enabled the Downtown Fresno Ale Trail to really take off. It’s definitely been a collaborative process with new breweries and ideas welcomed and fostered by the craft beer community.

Q: Is the Fresno community a craft beer savvy one, or is there still a lot of potential yet to be tapped out there? And what can the savvy craft beer aficionado from out-of-town expect from Fresno's version of the ale trail?

Blair: There is definitely a lot of craft-beer potential in Fresno and neighboring cities. Fresno State and Full Circle Brewing launched a program called Brew University (BrewU) at our State of Downtown event on March 28. Within one week, all 16 spots were filled with a wait list in place. This is a great example of not only the potential, but the enthusiasm of Fresno’s craft beer scene.

This goes hand-in-hand with what a visitor can expect from our Ale Trail. There is vibrancy to downtown and these breweries represent a unique spirit you’ll find along our streets, which translates to products and flavors you won’t find anywhere else.

Q: What do you think is the Fresno Ale Trail's potential, and what do you foresee emerging from it should the ale trail prove to be a successful one?

Blair: In two years’ time, downtown Fresno’s craft beer scene has tripled - from just two breweries we are our way to six. That collaborative approach has spilled into local restaurants and businesses - local beers on tap, renaming brews to align with events. Fresno’s community embraced the craft beer crowd with open arms and vice versa. With the addition of BrewU, we are creating a pipeline for those interested in learning more and turning their passion into a reality. There’s really no telling what the next two years might look like.

At the time of this post's finalization, I discovered that Blair had accepted a position as City Manager of Granby, Colorado starting in June. I would like to wish him well in his new endeavor and wish the Partnership the best in finding his successor.