The northern Ohio tourist destination that is Sandusky, best known for the world-famous roller coaster mecca Cedar Point Amusement Park, is not the first place I would expect a craft beer destination to reside. Not to say that this town of roughly 26,000 hasn't seen the effects of the state's craft beer boom - two nanobreweries in the forms of Ferndock Brewing and Amusement Ales and Brewing are currently cranking up their operations within the city limits.

Nor would I pick Sandusky as having certifiably solid restaurant specializing in Asian dishes. Heck, even a big city like Columbus still has its own issues in that department, considering a chain like P.F. Chang's can win (614)'s "ColumBest 2017" nomination for "Best Asian Restaurant."

But as the saying goes, appearances can be deceiving. Small City Taphouse, comfortably embedded within Sandusky's downtown, proved to be a winning enterprise on both those points to my spouse and I during a recent visit to their location with family. 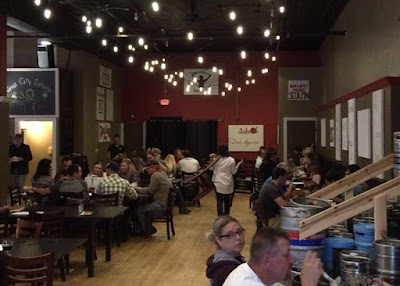 Opened up in June 2014 in the old Cabana Jack's space, Small City's fairly expansive space has a certain thrown-together vibe that I found charming. Many of the beer-related signs are hand-drawn affairs rather than the standard sleek promo media that dominates most other taprooms.  A stack of kegs from many breweries near and far stand guard over a staircase on one side of the space, while the taproom and kitchen dominate the opposite end. The crowd throughout our stay was lively, but it never ever got overbearingly loud as some spaces can get.

The Taphouse had come highly recommended by a fellow family member with us for both the beer and the food, with a particular nod to the sushi (Small House's menu is pretty much Asian-based.) Indeed, many people in-house seemed to be of the same mind: in the far northwest corner, I spied two staff members behind the sushi bar furious cranking out rolls, which come in basic and specialty versions.

I freely admit that I am not a sushi person, so I went the appetizer-listed Bahn Mi. This really turned out to be something of a deconstructed sandwich, featuring a bowl of what was a nicely tangy meatball soup with a side pile of bahn mi vegetables and a warm bolillo-style roll. 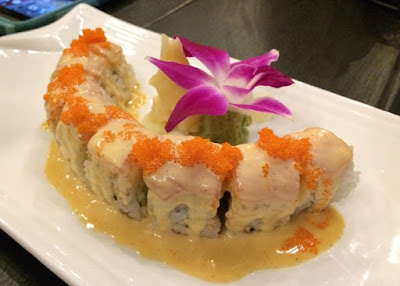 However, my wife has no such reluctance and ordered the Ichiban Roll.  This construct of spicy tuna, salmon, and caviar and a cream sauce was pretty good fare and even I thought it was decent as I snuck in a bite. Even better, we both ended up acquainted with the eatery's namesake roll, a layered affair involving spicy and regular tuna and salmon finished with spicy mayo, eel sauce and caviar. Like I said, I am not one to actively seek out sushi, but I would order this in the future without hesitation. 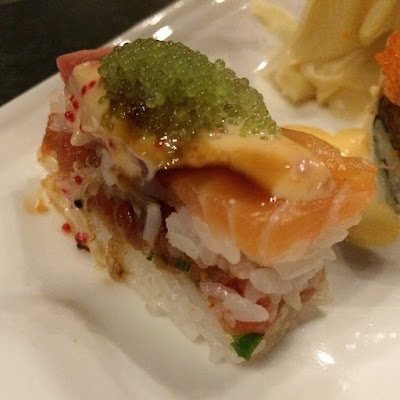 Sometimes, it's just nice to have an "in", and on this night, this very same family member happened to be great friends with Taphouse owner Kha Khet, who was able to briefly say hi before attending to the big crowd this night. As it turned out, it was easy to see what a consummate host he really was, as I spied him making the rounds, seemingly greeting everyone with a big smile and an easy-going attitude. 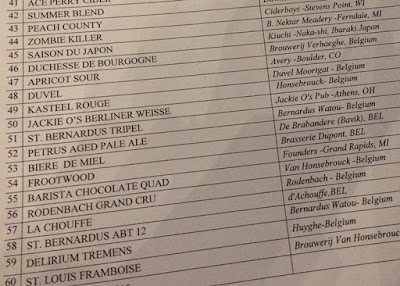 Small City Taphouse sports an enviable tap list of 60 beers of all styles from breweries scattered around the globe, with good-sized flights available for $15. Pretty much everyone at our table had reached at least their second beer when things had slowed down enough for Khet to spend some time at our table. That frankly would've been more than enough for us first-time visitors on this first encounter, but family members of a best friend apparently meant special treatment.

Yes, there came lots of unexpected beer, with snifters shared and rotated among the gathered in both directions. And yes, there came unexpected samples of the deliciousness Small City's chefs can create, including a surf and turf creation with some of the most tender steak you could imagine and perfectly cooked lobster on a bed of what tasted like crab-tinged rice. 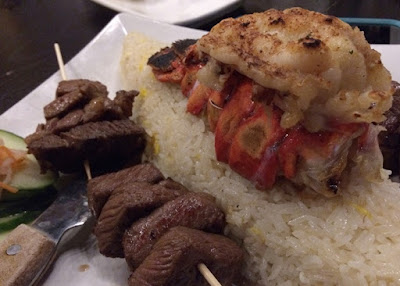 I admit, the second half of our night was a very atypical experience: as a general rule, no one fresh off the street should expect to have food and beverages thrown at them gratis (we did compensate by leaving a very nice tip for our server at the end of this night) by any restaurant anywhere in the world. But we first-timers experienced more than enough of Small City's vibe even before this unexpected but highly pleasing meal expansion to know that this visit will definitely not be our last. 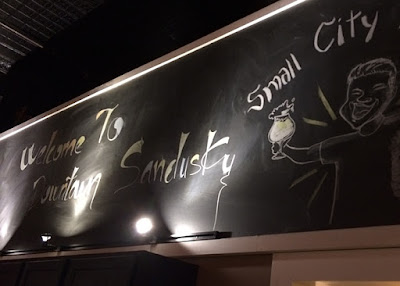