Reliability can be considered a boring concept in the food and drink world, but frankly I'm good with that, especially if that reliability ventures onto the positive side of the ledger.

Let's start with long time Brewery District mainstay CBC Restaurant. Formerly associated with Columbus Brewing Company via area restaurant maven Cameron Mitchell, CBC has pretty much kept the slightly more upscale than typical brewpub theme, crowd-friendly hangout (plenty of parking as well as an outdoor patio) atmosphere going for 20 years now, long after Mitchell sold the brewpub to its current owners and Columbus Brewing left the space for its current west side climes (Lenny Kolada's Commonhouse Ales now occupies the brewery area in the back of the space.) 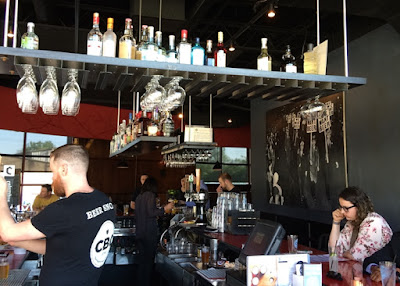 We've sampled CBC's dishes on several occasions and their food ranks from consistently solid to just plain good.  Favorites of ours include their pizzas (their Pizza and Pints nights offer that gets you a pie and a pint for $12.95 is an especially good bargain) and we are eager to continue exploring their brunch menu, one of their more recent additions. Add in their continuous featuring of Ohio-based craft beers, and CBC earns itself automatic consideration whenever we're down in that part of town. 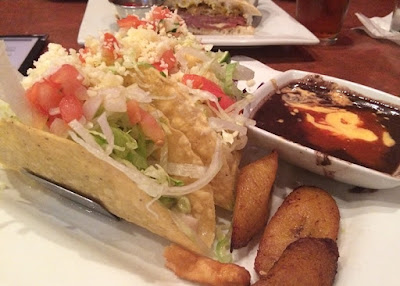 On the 3 o'clock side of town near the airport, Actual Brewing remains consistently focused on all things geeky and nerdy, with an appealingly huge lack of seriousness, as demonstrated by regular events like the popular "Immature Science Fair" as well as their Columbus Craft Beer Week 4th anniversary celebration colorfully titled "Tiger Party 2: Cosplay vs. Furries" (and yes, this event lived up to its billing, based on their Facebook feed.)

Established by Fred Lee in 2010, Actual's taproom out on James Road (which opened in 2014; a second taproom in Clintonville is on its way as well) doesn't look like it would be much of anything from the outside. Inside, however, it presents itself as the college dorm room my nerdy self wish I had had but just didn't know it (or, for that matter, couldn't afford) at the time. Arcade games intermingle with soda pop signs and shelves full of books split between all things craft beer, random fiction works, and collegiate titles like "A History of Western Philosophy" and "The Origin of Consciousness in the Breakdown of the Bicameral Mind." 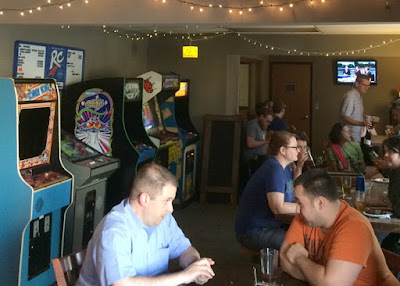 Unlike college, there's no need to grab an 18-pack of Natty Light and some Mr. P's Frozen Pizza to share with your broke-ass buddies: Actual has their brews on rotation, ranging from the easy drinking (their Photo Light Lager) to the more hefty (the Fat Julian, an Imperial Stout named for the Lee's family cat.)  Paired up with dishes from the typical rotating food truck flotilla model that many Columbus breweries utilize, and its easy to spend a couple of carefree hours at the taproom. 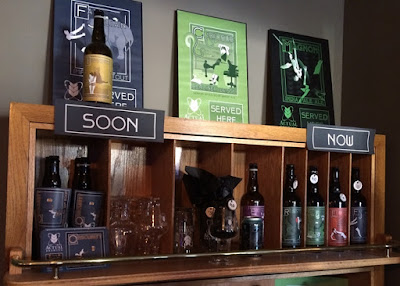 So how about put these two reliable (in their own way) entities together, toss in some catalysts like Columbus' long standing pantheon to science, the Center Of Science and Industry (most commonly referred to around the area as COSI), and the increasingly entropic craft beer deluge that is Columbus Craft Beer Week, and what do you get? 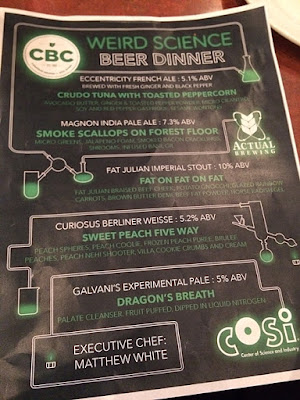 You get weird science...or should I say, delicious science.

With food created by CBC Executive Chef Matthew White, with plenty of assistance from Actual Brewing personnel and COSI representative Joe, and flanked by many enthusiastic dinner seekers, this specially-created event blended science, craft beer and cooking in perfect proportions to conjure up an appealing blend of science geekery and tastily paired up small plates and brews.

You don't hear terms like "smoking gun", "spherification" and "fat powder" too often with dinner, but those words, and how they were utilized, elevated this CBC-hosted beer dinner for Columbus Craft Beer Week into something unique and delicious; there was plenty to like with all the dishes prepared by Chef Matthew themselves. Perfectly paired up with (full pour(!)) samples of co-sponsor Actual Brewing, the price charged (right around $40) seemed to be quite a bargain.

Not surprisingly, with COSI representative Jon in the house, there was plenty of hands-on science to be had, mainly with that old standby liquid nitrogen. Not only did we finish off our meals with palate-cleansing flash-frozen Trix cereal (which gave us the promised "Dragon's Breath" effect), but we also received a fun demonstration related what happens when you get this rather chilly concoction (-321 degrees F) boiling vigorously.


While COSI is well-known as a very family- and kid-friendly venue, our host wanted to assure us that they had something to offer to the adults of the world, in the form of their "COSI After Dark" series of events featuring craft beer and a cash bar as well as activities geared toward the older set. We had been inclined to attend one of these events sometime down the road, but this beer dinner just convinced us that this visit needs to happen more sooner than later.