The other main exception lies in fine-dining experiences, where another singular experience may be all we get (as my spouse and I observed, we are a decidedly unfancy couple in general.) For example, we felt the tasting menu of Delaware's Veritas Tavern, which my spouse and I agreed has been one of our best dining experiences in Central Ohio, was definitely worth a shout out (with Veritas' upcoming relocation to Downtown Columbus, we're definitely aiming to make a return visit,)


April is typically one of our usual big vacation months, as it commemorates our "figuring-it-out" anniversary (on April Fools Day, no less.) However, our trip to California in February for a wedding meant that we would be home bound for the first time in awhile here in Columbus. Still, we wanted to celebrate this anniversary with a full day of activities out on the town.

As it turned out, G. Michael's worked out to be a perfect dinner destination with our itinerary this day in numerous ways. Perhaps the most interesting of these reasons was that we had not been back this eatery since we had visited as part of Columbus Food Adventures' excellent German Village Food and Walking Tour, where their bacon-wrapped pork tenderloin was a standout among many examples of deliciousness. A revisit was more than overdue for both of us. 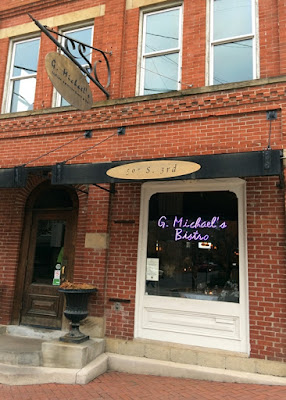 In an evolving Columbus restaurant scene that has leaned more toward casual dining, G. Michael's stands out by remaining true to its roots. Established in 1999 in a former horse livery and stable (if you look closely enough, you can see little hints of the space's past life in and around the interior brick walls,) the Bistro has kept up its traditionally-styled white tablecloth dining with spot-on service, seasonal ingredients, and a Southern/Low Country-oriented menu (courtesy of Chef/Co-owner David Tetzloff, who earned his cooking stripes in Charleston, SC.)

The bistro is unique in that it offers a choice of more intimate, dimly lit spaces, and a space with ample glass windows and views to the outside. During warmer months, G. Michael's patio also offers the opportunity for some outdoor dining.  Even on this overcast day, the natural light from outside made for a nice, bright environment for our meal. 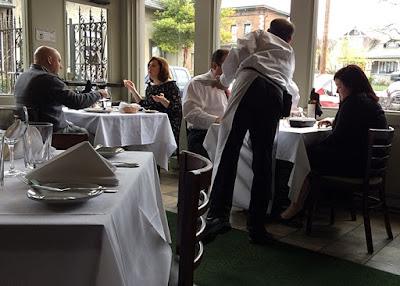 In the mood to indulge on this special dinner, we decided on an appetizer and a main each, plus cocktails. While the bistro's cocktail menu may not fit with the current "craft" movement burgeoning in Columbus, our drinks were crafted well and very satisfying, from my Elder Collins to my spouse's Third and Willow, G. Michael's take on a Great Gatsby (the latter was so tasty, my spouse had two.)

Our appetizers made us realize what a good deal G. Michael's Happy Hour would be - our appetizers were not only delicious but also very large. In the unofficial appetizer face off, our "winner" turned out to be a special for the night; Halibut Cheeks, with tender, flaky fish inside a crispy exterior, lying on top of a tangy mustard slaw topped with crispy, skinny shoestring potatoes for a gorgeous presentation all around. Coupled with a serving of bread from Granville's Lucky Cat Bakery, this was practically a meal in and of itself. 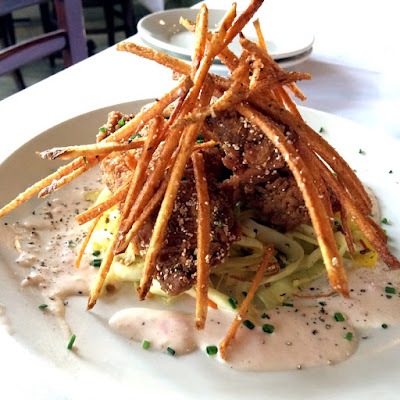 Our mains were equally as tasty. I went with a classic in G. Michael's Shrimp and Grits and, once again, this creation was a certifiable tummy-filling crowd-pleaser. Combining plenty of proteins (shrimp, country ham and Andouille sausage) with yellow grits, topped with sauteed spinach and bathed in a buttery tomato-scallion broth, it was easy to see why this creation has become the restaurant's lone year-round dish. 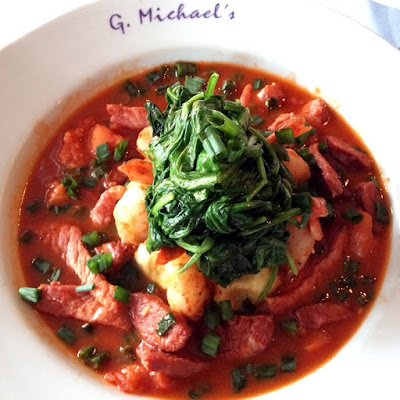 Growing up in the region of Ohio where perch and walleye rule many menus, my spouse didn't need much persuasion to opt for the Pan-Seared Walleye special.  If nothing else, this dish only further enhanced the notion that the G. Michael's knows how to do seafood well and provided a reasonably portioned but no less delicious. The delicate texture of the fish contrasted nicely with the bed of Cajun rice it topped, with the smoky tomato cream sauce adding a nice but not overwhelming savory kick. Sauteed green beans and a pickled-shrimp salad finished off what my spouse thought was a very satisfying creation. 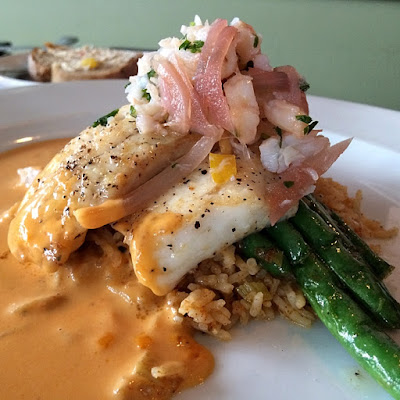 As we proceeded into our dinner, we could see how it has remained one of the top dining institutions in the city. Service was attentive and timely without being intrusive, allowing us to enjoy each other's company on this special dinner date.

With our visit to G. Michael's, there remains one last eatery from that German Village tour (Lindey's, the neighborhood's longest-operating restaurant) we intend to revisit one of these days. And yes, plenty of new eateries will pop up in the meantime that my spouse and I will drop by and sample.  However, I will say that we will try out best to NOT make it four-and-a-half years before we visit G. Michael's again.