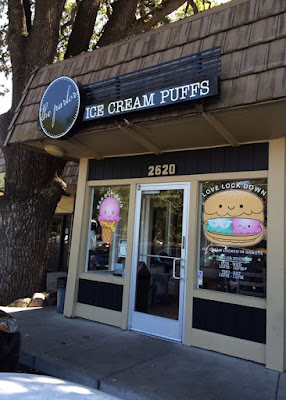 Located on the southern edge of the Arden-Arcade section of the metro, The Parlor Ice Cream Puffs concept is the brainchild of Lani Tran and Martin Nguyen. While you could do something more traditional such as grab a couple scoops in a waffle cone or order up a milkshake, it's almost mandatory that you do the donut/ice cream combination on the first visit in. 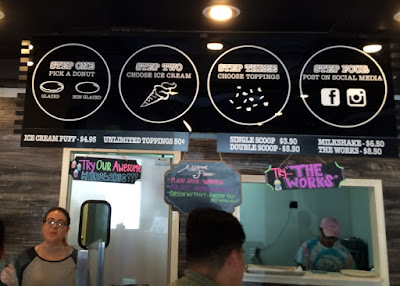 The big sign over the counter really explains the overriding concept of The Parlor's flagship creation fairly well - choose a donut (glazed or unglazed) then the ice cream and any toppings (including but hardly exclusive to coconut, graham cracker bits, and potato chips).  I suppose Step 4 (posting on social media) is something of an option, but hey, we don't mind following all the steps in this case. 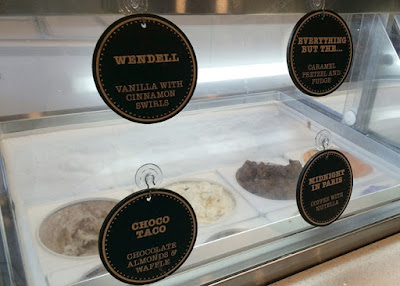 Sadly, I didn't have my favorite partner in crime on this trip, so this would be a tougher task than normal.  Do I go with a glazed or an unglazed donut for my order? And which of the ice cream flavors on hand do I try? It took a few minutes, but I decided I needed to bite the bullet (or is that donut?) and order two of these creations.

For the unglazed donut, I decided something overtly sweet would go best here and went with the Hello Kalo (taro coconut and condensed milk.) This turned out to be a perfect melding: the donut, which resembles a poofy hubcap more than the traditional holed-structure, sports just enough firmness on the exterior for the eater to grab hold of the sandwich without squishing it. The exterior also acts like a levee wall later on, keeping the luscious sogginess building inside from completely inundating your fingers (before scooping the ice cream within,The Parlor heats the interior of the donut just long enough to initiate the melting process.) This texture reminded me of a coffee-dunked donut, but with far more decadence. 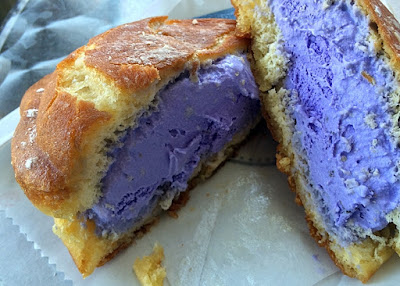 I struggled for an ice cream to pair up with the glazed donut, and my server recommended the Midnight In Paris (coffee ice cream and Nutella.) The Nutella made it a bit too sweet of a combination for me, but it did make me think about how perfect the glazed would be with a muscularly-flavored coffee ice cream. If I came back for a revisit, I'd probably settle on the Plain Jane (straight up Vanilla) or the Thai Tease (Vanilla with Thai Tea) to pair up with the glazed donut.

Two final thoughts struck me as I started munching down on my treats. First, for most mere mortals, one of these ice cream/donut creations is more than filling enough. I realized pretty quickly that downing two of these fairly substantial creations would send me into a huge dairy/sugar coma (not a preferred state with a couple hours of driving still left in the day) so I cut my order into pieces and made some local yokels happy with free "samples" of The Parlor's wares.

Finally, I started thinking of the endless combos available for such a creation in the Columbus metro area. A North Market pairing of a Destination Donuts and Jeni's? How about a "North of 270" marriage between Westerville's Schneider's Donuts and the tropical flavors of Hard Road's Mardi Gras? Or how about take one or two offerings from the venerable campus-located Buckeye Donuts and stuff it with the equally venerable French Pot style ice cream of Graeter's?  The mind (and appetite) reels from the possibilities.