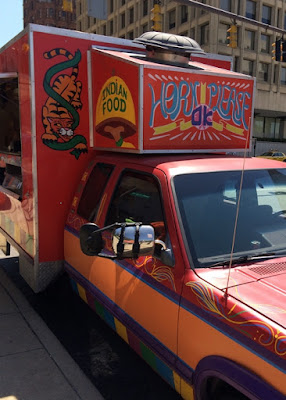 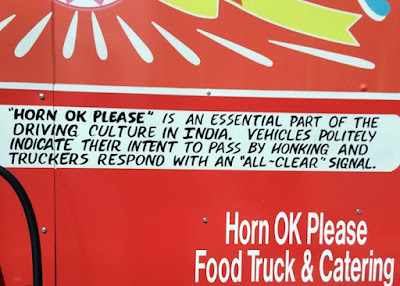 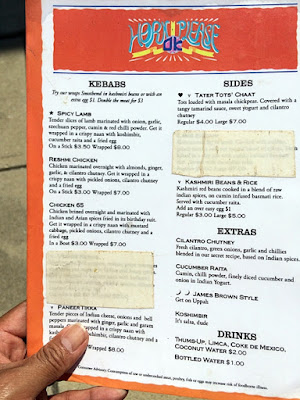 Standout Item: We really haven't had a bad item so far in our explorations of this food truck's menu, which contains a number of pleasing spice and textural combinations, as well as vegetarian options like the Veggie Kebab. However, the latest item I've tried, the Reshmi Chicken, might be my favorite so far. This naan wrap, containing chunks of chicken marinated in a chutney laced with almonds, ginger, garlic and cilantro, plus pickled onions and a fried egg, really provided a satisfying flavor blend. 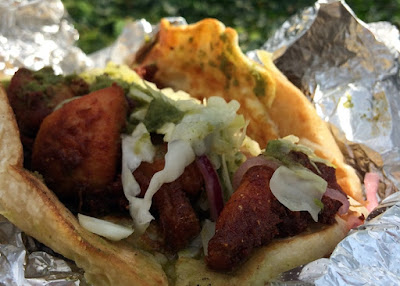 Bonus Item: Actually, a few come to mind here. The Tater Tots Chaat, a blend of my favorite fried potato concoction and masala chickpeas, is hardly traditional (at least, I don't think it is) but an inspired side item nonetheless. Second bonus item lies in their pop offerings, which includes the Indian brands Thums Up and Limca as well as the Mexican variety of Coca-Cola (Coconut Water and bottle water is also available.) Finally, while the food generally isn't mouth-heat spicy, it does pair up well with a cold brew. It's not surprising that Horn OK Go is in the regular rotation at Seventh Son Brewing and makes appearances at a number of other area breweries.