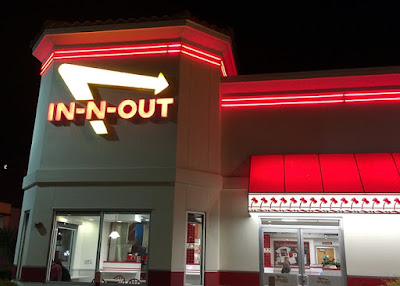 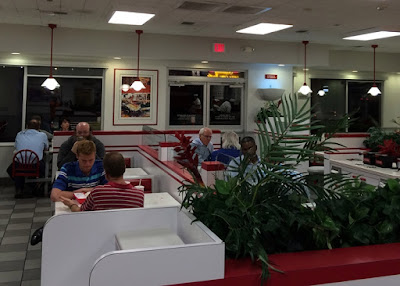 Nor has this massive display of love encouraged them to engage on any massive expansion a la Five Guys, the burger chain that is most often compared to them. In-N-Out took over four decades to reach their 100th location, and has only recently eked into the southern reaches of Oregon to notch state number six in its belt.

Bonus Points: For most people, it would be the so-called Secret Menu (a good compilation can be found at this rather-be-shopping.com article) where enhancements like Animal-Style fries and burgers, Protein-style burgers (sans bun), and combined cheese slices & burger patties up to 4x4. While I have dipped into that menu myself, the fact that I don't have to think too hard to remember "Number 3 with onions" (the basic burger & fries combo, with an occasional swap out of the regular onions for grilled ones) goes a long way to making ordering easy. 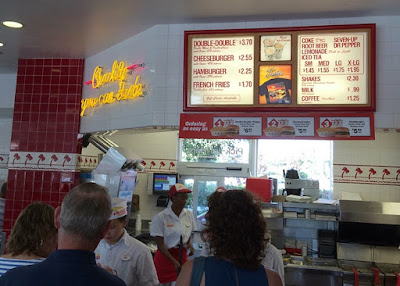 The Verdict: First, the fries: while In-N-Out uses hand-cut potatoes, the fact that they're only single-fried puts these a notch lower than Five Guys and even Whataburger. Ordering them well done helps a lot with getting a crispy exterior, but for the most part I don't. For me, they're perfectly fine fries, but not the star of the show. 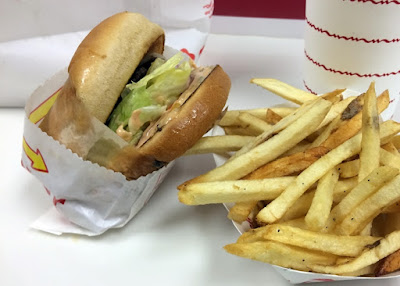 In-N-Out's basic burger really hits the right notes for me. The combination of the bun (made of slow-rising sponge dough), the better-than-average beef patties and related fixings, and the packaging, which keeps the burger insides securely inside when you're on the go, makes this my perfect go-to road food. Back in the day when I would travel to Southern California on a semi-regular basis, Kettleman City was ALWAYS the automatic lunch spot traveling down on I-5 toward La-la Land. Add in the reasonable price, and this basic combo remains my favorite quick go-to road traveling food when I'm back out west. 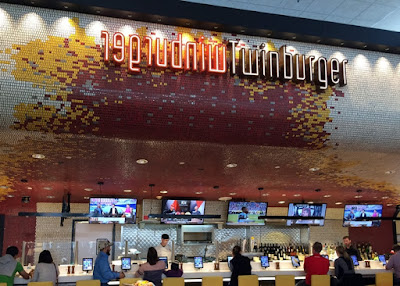 
Reason for the Visit: Airport connection hub layover + a chance to try the Minnesota regional specialty the Juicy Lucy, a hamburger with the cheese inside the meat patty

General Feel: Slowly but surely, airports have become a venue for some localities to show off their regional favorites. A Chicago-style Hot Dog, replete with among other things an all-beef wiener, neon-green pickle relish, and a dash of celery salt, is almost mandatory for me when I fly through The Windy City, whereas I might grab a kolache from Shipley's (sadly, the airport location has now closed) while flying through Houston.

The last couple of years, Concourse G at the Minneapolis-St. Paul Airport (MSP) has grown into a bit of a gastronomic haven for those flying into the Twin Cities. On my way back from the Bay Area, I spied a perfect opportunity to sample the area's take on the hamburger, the Jucy Lucy, at Twinburger.


Bonus Points: Twinburger's origins came with consultation from Scott Nelson, owner of one of the two places in the area (Matt's Bar) generally credited with inventing the Jucy Lucy burger, so one figures the credibility is pretty high on this rendition.

Techno-sophisticated types will also appreciate Twinburger as well as select other restaurants at MSP. Perhaps befitting the sleek, futuristic mosaic facade of this eatery, iPads lie stationed at every seat, along with an electronic reader to swipe your credit card of choice to pay for your order. Scrolling through the menu and placing my burger order proved no more difficult for me than buying something off, say, Amazon.com, but other visitors did require some assistance from the restaurant staff to figure out how it all worked. 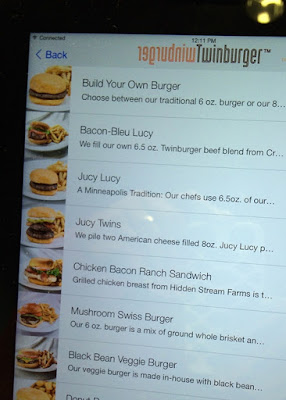 The iPad can also be used for surfing the web or playing games while your order is being prepped. In my case, however, the iPad annoyingly reverted to the home screen after a mere minute of inactivity, sometimes in the middle of scrolling through Google search results.

Another bonus lies in their craft beer: select brews from Minnesota-based breweries like Grain Belt, Fulton and Summit were available on tap. With a theoretically hearty burger headed my way, I went for something I felt would match up well in Surly Brewing's Furious IPA. 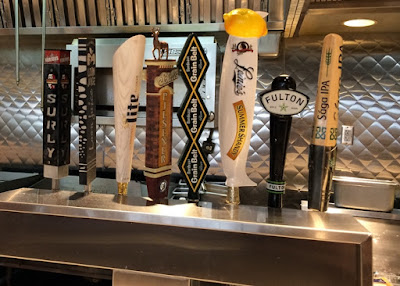 The Verdict:  The Jucy Lucy lives up to its name as a juicy entity: grilled with the cheese inside the meat, a cascade of beef juices and melted cheese met my senses as I cut the burger in half. The beef patty was seasoned well, but I thought it could've used even a touch more cheese inside. 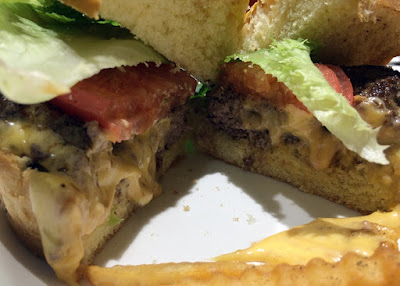 I liked that the fries were of the crinkle variety, but they just weren't quite as satisfying as any of my prior burger ventures' offerings. As I munched these down, I seriously wished I had something to kick up these potatoes like Whataburger's Spicy Ketchup, or a Cajun option like Five Guys offers.

Finally, you can't help but notice that your paying airport-inflated prices - at close to $20, this meal easily was the most expensive of my traveling burger adventures. If nothing else, the money will provide me with a benchmark for a return trip to the Twin Cities, where I can dive into the Jucy Lucy phenomenon (craft beer in hand) more deeply.
Posted by Joe