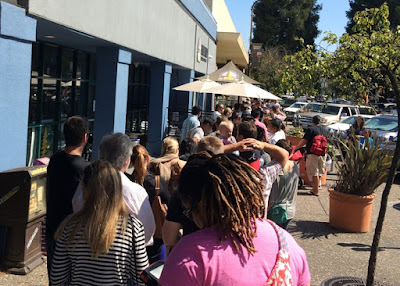 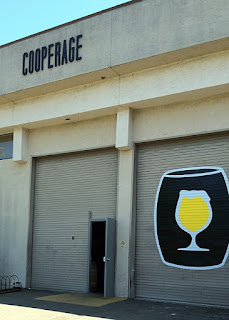 Opened in the summer of 2015 by husband/wife team Tyler and Stephanie Smith in the northern reaches of the city, Cooperage looked almost positively abandoned in comparison to its downtown brethren, and sported a plain-spoken exterior not unlike the breweries I had visited a few days prior in Sacramento. Despite the sandwich board sign outside, I drove by twice before convincing myself that the brewery was indeed open for business. Inside, the place pretty much fit the quiet, lazy Sunday mood pretty well (save for a fairly energetic foozball game off in the far corner; a couple of dartboards also provide another gaming option) with just a few early wanderers within. As the day progressed, a few more folks straggled in, but that same relaxed vibe remained throughout my stay.  The bartender this day also did her best to keep that vibe going, causally chatting up both me and my seat mate next to me at the bar.

While the high ceilings remind you that you're really within a warehouse, Cooperage does a pretty good job of making the interior fairly comforting, with a plenty of splashes of wood and one wall dedicated to a large mural and numerous art pieces from local artists. 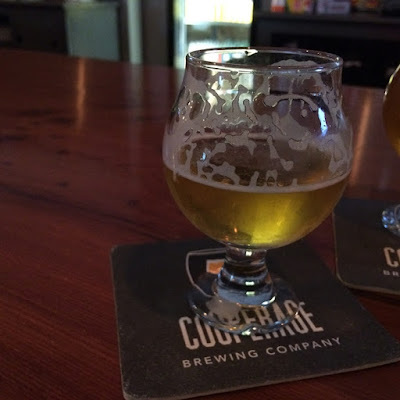 While Smith considers his specialty to be barrel-aged sour and lambic beers, those were still not ready for prime time during my visit. Cooperage holds the beer fort down in the meantime with a wide variety of beers, including a few Belgians and a series of wittily named Pale Ales (Ol' Curty Bastard and Everybody Curts were available on tap) made in honor of Curt, one of the brewery's bartenders.

Let's just say my flight of four beers was a pretty nice way to sip through an early weekend afternoon, after a decent but nothing spectacular Belgian Wit (Cooperage's Brony brew, My Wittle Ponies), the final three were all pretty solid affairs, from their Dawn Rising Belgian Strong to the previously mentioned Ol' Curty Bastard (pleasantly hoppy and malty with a hint of grapefruit) to another enjoyable session ale in their Party Water. If nothing else, it was definitely incentive to drop by in the future, preferably with the spouse and/or friends in tow.