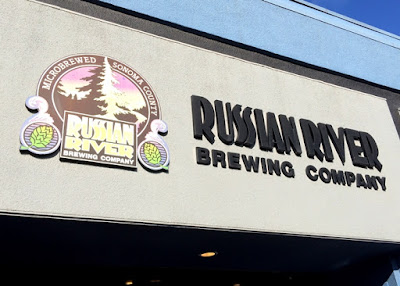 Maybe, maybe one day, the brews of Russian River Brewing, based in Santa Rosa, California, will match the distribution of other well known craft beer purveyors like Chico, California-based Sierra Nevada, or even Bend, Oregon's Deschutes Brewing (who made their Ohio debut early in 2014.) Maybe, maybe one day, co-owners/husband and wife team Vinnie and Natalie Cilurzo would make beer drinkers like my spouse and I extremely happy (or is that hoppy?) by having bottles of their Pliny the Elder Double IPA next to Columbus' Brewing Bodhi (the latter a soon to be reality, from the rumors I hear) and whatever other favorite IPA you can think of in the cooler next to each other, at the ready for a impromptu beer taste comparison.

But for a brewery that is already operating at full capacity with limited distribution and no immediate expansion plans, with an added dose of cult status (related mainly to the hype generated by their Pliny the Younger Triple IPA) mixed in, Russian River Brewing, like the waters of its namesake river (which for the most part remains unchecked by flood control measures) has found its own unique and highly sought level in the craft beer world.

No one, not even the Cilurzos themselves, would have predicted this back in 2002, when Vinnie was laid off from the original Russian River Brewery, a venture by a champagne maker (Korbel) to forge into the craft beer world. Rather than take a financial severance, Cilurzo asked only for (and received) the rights to the brewery name, logo, and the name rights to its line of production beers.

After money was raised for all the necessary brewing equipment, the brewery was reborn in downtown Santa Rosa in 2004 with a commitment to doing things in their own unassuming way. Things progressed steadily from there, until proclamations by beer review sites like BeerAdvocate and Ratebeer put the brewery's Pliny the Younger as one of, if not the best, beers in the whole wide world. Achieving cult status certainly was not the Cilurzos' intent when Younger was first brewed in 2005 as a winter seasonal beer (they are still reportedly uncomfortable with the whole notion) but this brew now has it in spades, promoting much discussion among aficionados about whether this brew could possibly live up to the hype it has generated and pushing the brewery itself to unforeseen heights.

I will say that as a former area native and now Ohio resident, Russian River is definitely worth a visit for pretty much any Ohio-based craft beer lover. With Petaluma-based Lagunitas and Healdsburg's Bear Republic, one could easily do a very tasty introductory California beer tour just heading up Highway 101 from San Francisco.

As one might expect, the combo of cult status and limited distribution makes the brewpub busier than most, and this is amplified during the usual rush periods like lunch, dinner and the weekends. Service does tend to get scattershot in terms of grabbing a table during the busier periods, but once we've landed the table, service was for the most part timely and efficient.

Sports schedules are also important to pay attention if you want to avoid a packed house, particularly when the MLB San Francisco Giants are being broadcast. This is especially true if they are playing their arch-rivals from Southern California, the Los Angeles Dodgers. We found the latter occurrence packed the brewpub about as much as any new beer release outside of Pliny the Younger itself, and it sent us packing to a decent-enough neighboring brewpub in Third Street Aleworks.

Our latest visit during an average weekday saw a line out the door right before the noon hour, but things did seem to calm down to more manageable levels as the 2 o'clock hour approached.  Besides off hours, folks who may not be keen on crowds may want to go when the weather (for the Bay Area, this would typically be rain) isn't that great. My first visit to Russian River with my spouse took place during such a day and we were able to land a table fairly quickly.

Once inside, you'll find what really is a fairly traditional brewpub style setup, replete with a long bar area and a table and chairs area, and plenty of Russian River and beer-related paraphernalia along the walls for viewing. The patio is also available for dining or standing around with your favorite brew when the weather allows it. If you're in the queue waiting for a table, you might notice the brisk grab-and-go business for the brewery's beer; more often than not, it will be cases of Russian River's popular and very tasty (and I'm saying this as someone who leans away from hoppy beers mostly) double IPA Pliny The Elder.

Truth be told, Russian River's food, based around a selection of pizzas, sandwiches and assorted salads and appetizers, is fairly average. But most anything on the menu is more than adequate accompaniment to provide the stomach padding for the variety of brews on tap offered, which on an average day ranges from 15 to 18 different beers. First-time visitors really owe it to themselves to share a flight of everything the brewery has on tap. While not everything has the cult status of Pliny the Younger, most folks will find that Russian River's brews all bring something to the table across numerous beer styles.

If you've been one who has been reluctant to try or has not found a sour beer to their liking, Russian River is one of those select handful of breweries that might be able to change your mind about them. Sours have been I and my spouse's mutual happy ground, and Russian River's Supplication (a wild Brown Ale aged in Pinot Noir oak barrels with added sour cherries, brettanomyces, lactobacillus, and pediococcus) and Consecration (A Belgian dark ale aged with currants in oak Cabernet Sauvignon barrels) would be top candidates for our desert-island refrigerators were we given such an opportunity.

As far as the Pliny the Younger, the latest iteration of this phenomenon is scheduled to start in just a few days at the time of this writing and last as usual for just a couple short weeks. The phenomenon has itself also found its own level naturally, resulting in special rates with partner hotels for Pliny pligrims, local television and media coverage and amusement-park length lines to grab three pours of this lauded elixir. If you're lucky to be in the four states the brewery distributes to, you may find a bar that has a keg or two for tapping, and some put their own clever spin on the process such as the Beer Mongers Bar in Portland Oregon.

No matter what you think about the whole phenomenon of Younger, and whether the pursuit of such would be worth it in the end (we've debate it ourselves to no firm conclusion), Russian River Brewing's commitment to craft beer excellence makes it more than a worthy stop for anyone traveling into the area with some beer-related pursuits in mind.