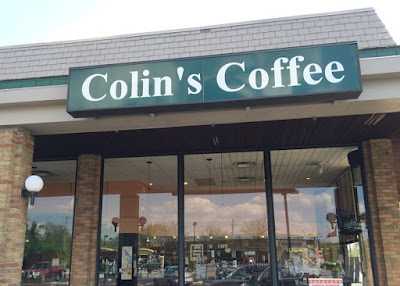 My recent experience on Columbus Food Adventures' Coffee Tour made me realize that with a couple of notable exceptions (Cafe Brioso and One Line Coffee), I've probably covered more out-of-the-area coffee houses than the locally-based ones on this blog. I figure this time is as good a time to catch up a bit with a mini-series of blog posts, and the first one ought to be my very first encounter with the city's coffee scene. As it turned out, it was also my first encounter with the city's music scene.

Back in the day, my pursuit of my running passion was just starting to mature. The combination of the love of this hobby that most people think of as punishment brought me into contact via the Internet with a group of fellow runners and friends from around the country. Aside from our online exchanges, we arranged meetups around the country for some in-person camaraderie, running, and good food and libations throughout. This included a meetup in Cincinnati, which hosts the well organized and festive Flying Pig Marathon every May.

Despite never having traveled within the Buckeye State's borders ever before, I was tasked with driving from Cincinnati to pick up my roommate for the weekend from the Columbus airport (the cost of flying into Cincy for him was cost-prohibitive; I was only able to do it myself by using frequent flyer miles.) As it turned out, the trip to pick him up was fairly easy enough (mostly Interstate routes) but my trip back would end up with an added destination.

One of our running colleagues bragged of an incredible musician in the Columbus area named Colin Gawel, whose band she would always go to see whenever they toured around her part of the country. She added that he owned a coffee store in the area, and that I should drop by and visit him. Moreover, she claimed Gawel had an incredible memory, and that he would recognize her should I drop her name to him.

Back in those days, I was not anywhere close to being a regular coffee drinker, but her story was too good not to check out.

As I would find out after moving here, a trip over from the airport to Colin Coffee's Upper Arlington location is a fairly straightforward affair. But as I wandered up the windy road that is Riverside Drive, I grew more and more worried that I was severely lost as nothing resembling a coffee cafe popped up in my sights for what seemed like miles. Amazingly enough, I chose to pull over at the Golden Bear Center as a place to pull over to catch my bearings, and boom! - Colin's Coffee was practically in my lap.

Sure enough, my friend was dead on correct; he remembered her quite well, though it had been some time since the band had been in her area. And oh yeah, I got a pretty good cup of coffee to go to boot.

As I've spent more time here, Colin's Coffee has proven to be that prototype neighborhood business. The cafe sports a winning combo of charming feistiness (from cheeky, politically-styled signs asking you to support their small business, to their proclamation that friends do not let friends drink the concoctions from a certain mermaid-logoed competitor) and charitable community involvement and support of the its surrounding Upper Arlington environs and various local organizations,

This shouldn't be surprising, considering the locally-born Gawel has been doggedly plugging along as well as a prominent member of Columbus music community for much of his life, most notably through his work with Watershed and later Colin Gawel and The Lonely Bones. Many of Gawel's musings on music, baseball and other topics of interest are captured on his blog site Pencilstorm, and he has recently released a compilation of recordings entitled "Superior: The Best of Colin Gawel" in December, 2015. 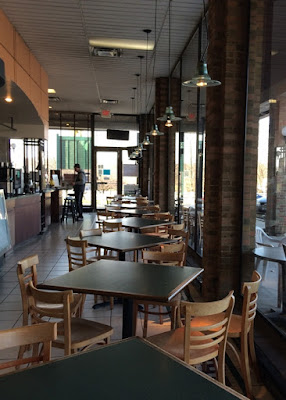 The interior of the cafe is reflective of its 1960's-era strip mall location; while it may not offer the olden-day charm of a place like, say, Stauf's in Grandview, the plentiful glass windows allow a lot of natural light to illuminate this otherwise roomy and functional space. If you didn't bring your computer or smart phone with you, more old-school time-occupiers are available in the form of books on the store's informal book exchange shelf.

Besides the more than competently brewed coffee-drinks (The Foglifter (a shot of espresso with their cup of the day) and the Polar Blast (an iced coffee drink with cool milk with your choice of vanilla or espresso) have been my standbys here), Colin's features a small stable of food items such as bagels from the Eastside's Block's Bagels and pretty tasty scones every Wednesday from My Sweet One Bakery. Other offerings include the McRoy Breakfast Sandwich (a much tastier alternative to the offerings of the cafe's "arch"-enemy just across the parking lot), which comes in both standard (egg, bacon & cheese) as well as veggie formats. 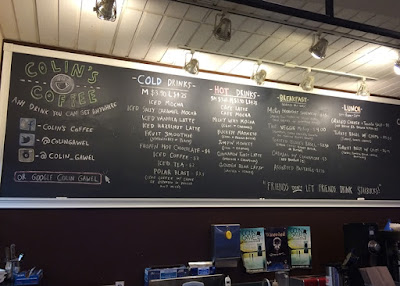