My spouse and I had the pleasure of attending our first ever High Gravity Hullabaloo, an event hosted by the Columbus Craft Beer Alliance (CCBA) this last Saturday, February 6th.

The CCBA, which touts itself as a non-profit organization "with the mission to promote and support Columbus area breweries" on its website, has hosted numerous events to support this cause, including the inaugural "Beer and Donuts" event at the newly opened Four String facility on the west side of Columbus.

The Hullabaloo is currently CCBA's longest running event. Touted as a celebration of "Strong Beers and Smoked Meats', this now three-year-old gathering has paralleled the growth rate of craft beer in both Columbus and the state of Ohio overall. Starting with the inaugural 2014 Hullabaloo with twelve total breweries (with ten from the metro area), 2016's version sported just over 30 breweries, with representation from all corners of the state from such breweries like Rhinegeist and Madtree (Cincinnati), Warped Wing (Dayton), The Brew Kettle (Strongsville) and Catawba Island (Port Clinton.)  In another sign of growth, the venue changed from its original Grandview location to the former location of the Byers Chevrolet dealership in Franklinton.

We have not been to a bigger beer-oriented event since last year's Columbus Winter Beerfest, but we took our lessons learned there to heart. With most of the beers in the double-digit ABV-range, pacing would be important, and the souvenir glass provided to all Hullabaloo goers proved to be the perfect size for sampling. Also, we made a commitment to change up the taste palate as much as possible, which proved to be a perfect strategy, as it would have been easy for me to go with my tendencies toward stouts and porters. Finally, we both had goals of trying breweries that either aren't as readily available here or new/new-to-us. Sometimes, though, old favorites are hard to resist.

The size of this event seemed to be more of our liking. While there will always be a demand for the bigger events (we would love to go to something like the Great American Beer Festival someday), the crowd of a few hundred of what seemed to be mostly more sophisticated beer drinkers was, to quote the immortal Goldilocks, "just right." The vibe overall seemed to be very informal yet cordial, and most everyone we encountered seemed to be in good spirits.

And now, a little photo show of what we experienced at this year's Columbus High Gravity Hullabaloo... 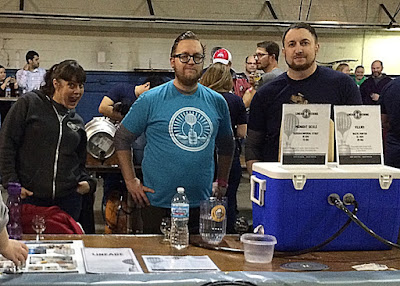 Update: Sadly, it turns out this will be the last year for the Hullabaloo, due to what seems like a bevy of (unwarranted, at least based on my own experience here) complaints and some actual threats against event organizers.  For more details behind the event's discontinuance, please consult this article from the Columbus Underground.

However, in a bit of good news, it looks like the CCBA will be continue promoting the craft beer scene around Columbus with a series of more intimate, soon-to-be-determined events. For more information on these upcoming events hosted by the Columbus Craft Beer Alliance (CCBA) please contact them at the following links:
CCBA -  Facebook      Instagram     Website
Posted by Joe