A recent trip pursuing one of our new favorite pastimes for my spouse and I (antique hunting) brought us to the US-30 corridor right where it intersects with I-71 towards Cleveland. The hunting proved to be pretty good as we dug up some fairly unique finds at decent prices, and these ventures into unexplored (for us, anyway) parts of the state finished up in Wooster, a town of roughly 25,000 people named after Revolutionary War general David Wooster.

We had thoughts of dropping by the town's lone brewery, JAFB Wooster, after our day's hunting was over provided we weren't too tuckered out. However, the shopkeeper of the last antique store erased any doubts in our mind, as she gave her thumbs up to going and was more than happy to give us driving directions to their taproom, located just to the east of the main downtown area.

One thing that stood out immediately to us was the unique name of this brewery, and it was one of our first inquiries after we ordered our beer. As we found out from one of the bartenders that day, it came from struggle that JAFB brewmaster Paul Fryman had in finding a name for his new enterprise. A colleague of Fryman, perhaps in a little bit of exasperation over the delay, stated that the venture was "just another f______ brewery" (you can probably guess what word that starts with "f" was used.) That phrase inspired the acronym that became the name of his brewery, which opened its taproom doors to the public in 2012. 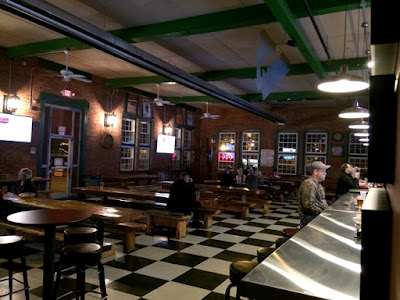 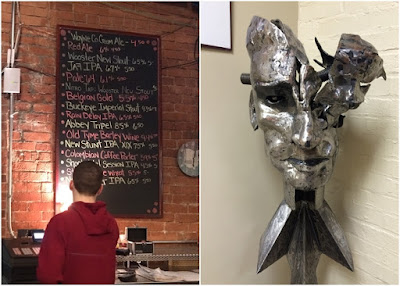 The interior space of the building, home of a former auto parts store, is pretty tidy, with brick walls, high ceilings, and beautifully polished, long wooden benches that invite a communal atmosphere. Televisions ring the bar area and the space; as noted by the orange-helmet emblazoned sign outside, this space is a friendly haven for Cleveland Browns fans. The space also has some fairly unique pieces of artwork scattered throughout, including one striking sculpture tucked away in one dark corner. We had not noticed this piece was basically right next to us until we were well settled in; while some might consider it unsettling, it wasn't enough so to encourage us to move (if you want to do a bit of pre-visit scouting, Pat from the beer blog website Pat's Pints has a photo of this work of art from his 2014 visit to brewery.)

As we found out, folks familiar with JAFB's beer offerings will not feel out of touch should they catch a home game: JAFB's Pale '64 (the number a reference to 1964, the year when an underdog Browns team won their last championship) is available at Browns Stadium. The brew was a nicely floral and satisfying finish to our beer sampling that night. If you're not in the mood for football, perhaps a little polka music will draw you in, courtesy of regularly scheduled live shows with The Chadron Polka Band. 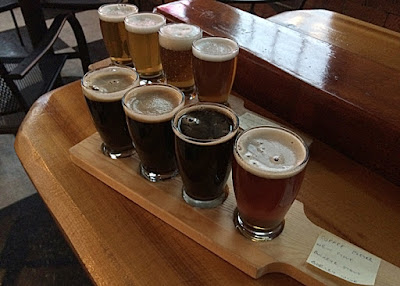 Of course, we couldn't not try a bevy of their offerings while we were there, so we ordered up a flight each of their beer styles (like always, my spouse went for the hoppier while I went for the more maltier for some mutual tasting. Fryman has won several medals for his brews at the prestigious Great American Beer Festival, including silver medals the last two consecutive years for JAFB's Wooster New Stout and Rain Delay IPA. We made sure to include those in our samplers and we found out why the judges in Colorado were impressed with these brews. Right up my alley as well were the Buckeye Imperial Stout and perhaps my favorite of the foursome, the Colombian Coffee Porter.

For my spouse, her IPAs were all fairly well-executed brews: it was more of what hop taste profile you prefer, from the smack-you-in-the-mouth J.A.F. IPA to the unique New Stunt XIX. The latter IPA brew, part of the brewery's "New Stunt" series of IPAs, is an attempt by the brewery to seek out the "perfect" IPA; the twentieth iteration was released in mid-February.

JAFB may be just another, uh, brewery, but its definitely worth dropping into if you're in the Wooster area if you would like to sample some of the better craft beers in the state.