It Takes A Convoy: The Columbus Mobile Food Conference and Expo 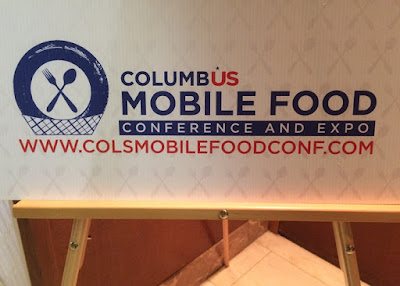 One of the nicer finds since moving to the Columbus area has been seeing how vibrant the food truck scene here is. I saw this aspect as a strength of the San Francisco Bay Area, my former stomping grounds. This area has had a well-established scene dating back to the 1980s with the Oakland-based taco trucks, complemented later by the new wave of food trucks from the late 2000s onward inspired by the success of folks like Los Angeles-based Kogi BBQ, This has led to such ventures such as the very popular Off The Grid food truck venues which now ring the area.

From the latest info I was able to gather from Street Eats Columbus and The Metropreneur, the metro area has roughly 40 traditional taco trucks and roughly 100 food truck owners overall. I have had plenty of tasty experiences with many of these mobile food vendors, and have enjoyed their presence at many area festivals, events, and mobile-vendor-specific events like the weekly Columbus Commons Food Truck Food Court and the annual Columbus Food Truck Festival.

However, I admit that when I got the invite from Mike Gallicchio for a pass to the first ever Columbus Mobile Food Conference, I thought long and hard as to whether it would be worth it from my little corner of the food universe. As a local blogger who leans a lot toward the local food and beverage scene in my write-ups, my viewpoint is almost always from the end user (or is it that end-devourer) point of view rather than the process that got the food item to the end user stage. Upon closer inspection, the seminars offered seemed to be highly geared to either those already in the business or wanting to get in the business, nothing that would be in the cards for me outside of a hit-the-Powerball-now-I'm-bored-what-should-I-do-now lark. However, a talk with a colleague of mine convinced me essentially of the old adage of "nothing ventured, nothing gained", and I happily took the invite.

While indeed it was true that most of the seminars weren't geared to someone in my position ("Codes, Permits and Inspections", "Franchising - When It's Time To Grow" and "Accounting and Law: How To Protect My Business" were definitely for those already in or endeavoring to enter the mobile food world), the mere existence of these seminars easily gives even a more-or-less neutral observer an idea of how complicated it is to run a mobile venture. And it wasn't like there weren't seminars that were highly informative and useful for me: Cheryl Harrison of Drink Up Columbus and Eric Weiner of FoodtrucksIN.com gave excellent information and advice regarding the optimization of social media for folks in the industry.

Further indication of this complexity was found in the select but highly varied collection of exhibitor booths in the conference area. I imagine all conference participants who are trying enter the world of mobile vending got that sense as they wandered from booth to booth from industry associations to food service products providers to financiers to food truck designers and so forth.

The networking aspect found in a conference like this is something of a given, but its importance cannot be overlooked. Similar to other niches of the local scene I have grown familiar with (e.g. the local craft beer scene), the support within the local mobile food community was easy to spot. Personally, it was a pleasure to meet some of the folks behind some of the food trucks my spouse and I have personally enjoyed dining at (Sophie's Gourmet Pierogi and Horn OK Please, to name two.) Perhaps more pleasurable to me was to see the genuine camaraderie among folks within the local mobile vendor scene. Even here, their banter spoke to the myriad of important issues one deals with in this world, from large scale (facilities to park and fix your equipment) to the small (what is the best degreaser for the money out there?)

Another overriding theme I got from the conference was, to paraphrase the African proverb, it takes a convoy to make for a successful food truck conference. From the seminar speakers directly within (Jeni's Splendid Ice Creams founder Jeni Britton Bauer, Mikey Sorboro of Mikey's Late Night Slice, and Kate Djupe of The Commissary Columbus, to name a few) and those promoting (Bethia Woolf of Columbus Food Adventures, Nik Gandhy and his Street Food Finder, and Rachel Casteel Cook and Tiffany Harelik's upcoming Columbus Food Truck Cookbook, among others) the local mobile food scene, down to the exhibitors, venue providers, and participants who attended this week's event, all the right elements were there .

Last but not least, I do want to shed light on those participants. While it was pleasurable to talk with the people who are well-established within the current scene, it was equally such to chat with the folks at other stages of the process. Everyone I spoke with had an interesting tale, from Chad, who along with his ex-pat Texas friends was working to get together a Texas BBQ/Tex-Mex food truck, to the De Massimos from Hilliard, who were trying to get their homemade pasta sauces out to a larger market via the farmers market route. I spoke with the folks behind Barroluco, who are very close to getting their Argentine comfort food concept out to the public at large, and those behind Westerville's Blue Chew, a new arrival to the scene from the summer of 2015, who are still learning the ropes of making a living as a mobile food operator. I personally do hope to cross paths with these folks sometime in the future.

Last but not least I wanted to mention the pair who trucked it all the way from Milwaukee, Wisconsin. They seemed to already have a solid concept in place (a catering trailer geared toward larger events such as barn weddings), but the fact that they made the roughly 7-hour drive out to attend the conference speaks volumes of the potential of this conference. While this inaugural event was meant to be something of an intimate affair, the Columbus Mobile Food Expo could easily become a larger annual regional draw for mobile food vendors from surrounding areas. The exchange of ideas and experiences from across the area would only seem beneficial in promoting the growth of this burgeoning area of the restaurant and food service industry as a whole. I myself look at this aspect about as eagerly as finding local mobile food vendors, both new and tried-and-true, that I might encounter in my upcoming culinary ventures.