I have been a big fan of Columbus Food Adventures (CFA) and the myriad of culinary-oriented tours they provide of the area's metro scene. In fact, my spouse and I have been on enough of them to fill out one of the culinary passports they give tour-goers at the end of excursion entitling you to a free tour, and we are most definitely looking forward to scheduling that in the near future.

While organizing my computer files recently, I just realized that the latest tour we took with CFA, the Coffee Tour, was one I had not written about. Although it has been a couple months since this early December tour, I did want to write up a little something on it because, similar to previous tours with them, we along a friend of ours from out of town very much enjoyed this excursion.

I will start by saying this is one of CFA's more unique tours in that it covers one very specific item: coffee. This one item, however, has gained Columbus' renown for over the past few years. The coffee-oriented website Sprudge listed Columbus in its 2014 "5 Underrated Coffee Cities" and local roaster Crimson Cup was designated "2016 Macro Roaster of the Year" by industry magazine Roast. The coffee scene has also become a tourist attraction as well, with the folks at Experience Columbus creating the Columbus Coffee Trail that provides out-of-town java enthusiasts a fun way to seek out the area's best caffeinated concoctions. 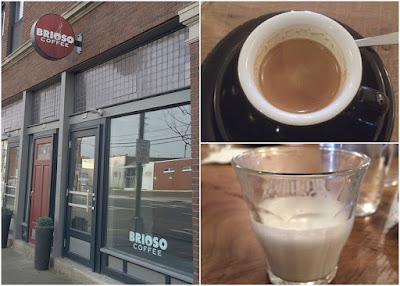 On our particular iteration of the tour, we stopped by three long-time and well-respected local java purveyors: Cafe Brioso (at the time, it was a preview of their just newly-opened roasting and training facility on Long Street), Stauf's Coffee Roasters and their production facility on the west side of Columbus, and one of Grandview Heights' favorite gathering places in Luck Brothers Coffee.

As the tour forged onward, a general theme eventually rose to the forefront. My spouse (who was actually on her second Coffee Tour with CFA) and I easily saw that these three Columbus-based coffee companies were equally passionate for what is a staple beverage for millions of people here and around the world. However, their philosophies, and the preparation of coffee of general, is a much more complex and variable process than one might think.

For example, at our first stop at Cafe Brioso, one of the main focuses owner Jeff Davis and the cafe staff centered on was espresso. They prepared their renditions of various espresso-based drinks, allowing tour-goers to experience the big coffee chains' (unfortunately) transmuted versions and compare them to their more traditional and tasteful renditions of the same. 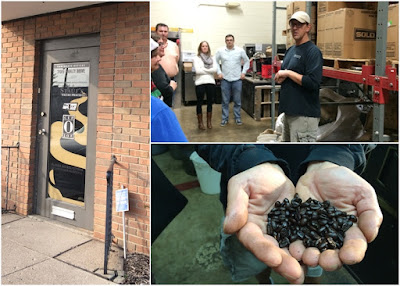 The folks at Stauf's, on the other hand, were not so much concerned with how the public liked their coffee (president Mark Swanson iterated to us they weren't ones to judge what their customers liked) but rather in sourcing the best beans possible, roasting them right and offering a wide variety of single-origin, bean blends and flavored coffees for its customers. As you might expect, aspects of the coffee bean took center-stage here, from bean origins to roasting and beyond. 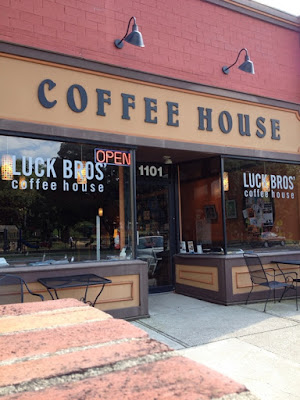 Finally, we got to Luck Brothers to hear Andy Luck's philosophy on the caffeinated elixir. His main point to the tour group was that while there are a number of methods to prepare your brew, most people were not using that method in the most optimal way possible. This was perhaps the most practical portion for tour-goers, as they were able to run their current coffee preparation methods by Luck and get his thoughts on possible alternatives to explore.

Before our tour, Columbus Food Adventures co-founder and our guide that day Andy Dehus mentioned to me that because the Coffee Tour is run less often many of CFA's other tours, it's sometimes harder to get a buzz (no pun intended) going beforehand. While our tour, held in early December, was just a touch under full capacity, I have been heartened to see that the upcoming tour on February 20th is sold out and that the March 5th tour is very near capacity.

Indeed, if you are a fan of coffee, this worthwhile tour from CFA will give you both a deeper understanding of your cup of java as well as the Columbus coffee scene in general. And oh yeah, you will get one nice caffeine buzz to boot, and there's nothing wrong with that.