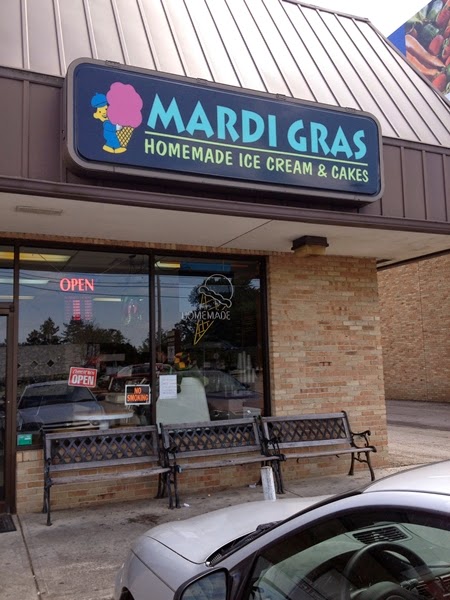 The childhood ice cream palace of my dreams (and is still something I miss greatly now) is Mitchell's Ice Cream, at the edge of the Mission District in San Francisco.  What made it stand out in my mind from other ice cream places was their incorporation of fruits and flavors of the Philippines.  Their mango flavor, introduced in the 1960's, quickly became and currently remains their most popular flavor.  Other flavors such as buko (young coconut), macapuno (coconut sport), langka (jackfruit) and my all time favorite ever, ube (purple yam) make Mitchell's a must-stopover when I'm in that part of the city even now.

Forward to late last year.  While driving on the very northern reaches of Columbus proper on Smoky Row Road, I spotted in passing a somewhat colorful sign off in the distance in an otherwise unremarkable small strip mall along Hard Road.  When I saw "Mardi Gras" on the sign, I figured it might be some party supply store or something similar.

I didn't think too much about it again until I happened to drive through that area a few days later and spotted it from afar. Curiosity got the best of me this time and I decided to look it up on the Internet.

Okay, ice cream...with VERY interesting Indian flavors?  I tell my spouse and she agrees - we'll need to make a visit to check it out.  Sounds good - mark it down for future reference...

Fast forward to a few weeks back, after a hot and sweaty bike ride with my spouse in the Westerville area. My spouse makes a suggestion that just reinforces the numerous reasons why I traveled all this way from the West Coast to marry her - "Hey, why don't we go try Mardi Gras since we'll be near there?" 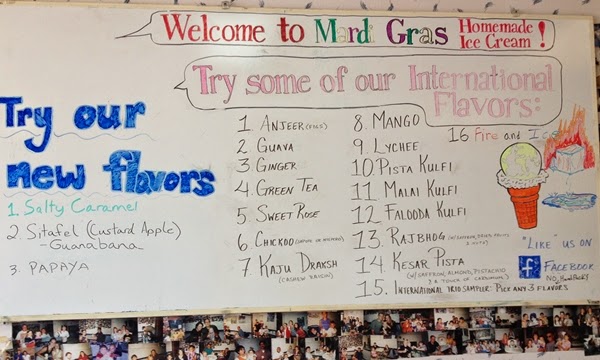 The colorful sign which initially caught my attention may be the most visually attention-grabbing thing about the shop.  The interior is retro in that it the decor remains rooted in the late 1980s/early 1990s, One side of the room sports blue feather-like motif wall paper, an impossible to miss dry-erase marker board and slightly misaligned rows full of smiling customer photos. On the other side, a marble-like surface provides the backdrop for menu boards that might just be the original signage from when the shop opened its doors to the public..

But then again, one really shouldn't expect to see an immaculately manicured space here; if you want the modern, clean touches of a Jeni's or a Graeter's, don't stop by here.  Instead, it is the flavors scribbled on their large dry-erase board that should bring you here, along with a willingness to engage in a little international culinary travel.  My spouse and I had our boarding passes; now came the (happily-accepted) challenge of choosing our ice cream flavors.

After samplers of the Fire and Ice (no kidding - this one has some serious burn) and the Anjeer (fig), my spouse stuck with one adult-sized scoop ($2.99) of the latter. As it turned out, the Anjeer was perhaps too subtle as a whole; little of the fig flavor infused into the ice cream base in comparison with the actual chunks of the fig fruit scattered within.

As for me, I sampled the papaya (probably one my choices for a return visit) and custard apple, then just decided to dive in with the International Trio Sampler ($8; three kid-sized scoops of any of Mardi Gras' international flavors.)

One definite for me was the mango, which was the lone flavor that I could give a one-on-one comparison with my childhood favorite Mitchell's version. I went blind and threw in the Chickoo (made of Sapodilla fruit native to the tropical regions in North and South America and brought over to Asia during the Spanish colonization) and Kesar Pista (pistachio, almond with saffron spice with just a hint of cardamom) just out of sheer intrigue. I sampled the mango first; compared to Mitchell's version, this scoop had a lot lighter mouthfeel (Mitchell's uses a cream with a very high butterfat (16%) content) and a bit more tang, akin to a mango lassi.  I liked it well enough on its own right. But my favorites were my other two choices, and even now I can't pick a favorite (my spouse slightly favored the Kesar Pista, but only by the tiniest of margins.)  The Chickoo had a simple but uniquely tasty flavor profile, punctuated by crunchy/grainy bits of the fruit itself. Meanwhile, the Kesar Pista gave everything that the description promised, but with no flavor overwhelming the other. This allowed you to focus on each individual flavor or see how they played together on each spoonful.

All typical ice cream accoutrements (sundaes, sprinkles, cones, etc.) are available as well as some interesting looking cakes with and without ice cream.  Pints, quarts and gallons of their ice cream are also available for purchase, with occasional buy one or buy three/get one free notifications posted on their Facebook page.

When considering the whole experience, some may balk at the Jeni's-esque pricing here for the ice cream scoops ($2.99 for the first adult-sized scoop, $2.75 for each additional scoop; kid-sized scoops follow a similar pricing structure at $2.65 first/$2.25 additional.)   But based on our first tasting experience, it's easy to tell that the owners here put as much love and care into their unique flavors as Ms. Bauer does with hers. And the numerous pictures of happy customers on the wall here say that not a lot of other people seem to mind the pricing either.