A League of Our Own: Hanging with the Clippers

While I love a good Major League Baseball game (especially when it involves the team I grew up with, the San Francisco Giants,) I find games at the minor league level as a whole much more entertaining. The "everything but the kitchen sink" mantra rules here as fan attendance is central for lower-level professional teams in terms of team value and the ability to pay the bills.

The smaller size of these ballparks is a bonus as well; one typically never feels too claustrophobic when the park is packed to the rafters, nor too isolated when a sparser crowd is in house. Finally, the motif of a baseball game in just about any format fits that uncomplicated summer task of lazing away in the day's warmth for a few hours with your favorite food and beverage at the ready.

While I have already attended a minor league game already last year in Ohio courtesy of the Akron Rubberducks (who were then known as the Aeros,) my spouse and I had never dropped in together on a home game for Columbus' very own Clippers until earlier this month during the Independence Day holiday weekend.

Huntington Park, home of the Columbus Clippers, reminds me a lot of another capital city's home park - Raley Field in Sacramento, California. Unlike Raley Field, Huntington Park has some of the outdoor touches of the San Francisco Giants' own AT&T Park, including the prominent brick structures and the little covey areas where fans can sneak a free peek at the game. The statue of Harold Cooper at the front gate, considered the patriarch of Columbus baseball, also reminded me of the quartet of statues surrounding my former home ballpark.

Something that was pleasantly NOT like the Bay Area was the parking price - we were quite happy when we only had to fork over $5 for a nearby parking garage (I paid five times as much for parking at the last Giants game I was able to catch.)

With the Clippers a Triple-A affiliate of the Cleveland Indians, their games against their intrastate rival Toledo Mud Hens (affiliate of the Indians' cross-border divisional rival Detroit Tigers) tend to be more zesty than a typical league game. What had been a game that still had seat tickets available on Friday became a standing-room only affair by the time we got pay our admission the next day. These standing room only tickets ($7 each) proved to be a fairly nice buy however as there are plenty of walls, picnic benches and counters around the ballpark to set up camp. If one chose, more standing and seating areas were available beyond the left field stands if you decided some munchies at Bob Evans or Roosters were in the cards for you.

Before the ballgame started, the owner of the Clippers came onto the field to announce that since the Clippers were actually in town for the Independence Day holiday weekend for the first time, they were using the occasion to honor military servicemen and women from around the area. But as is the minor league baseball way of doing things, the first part of the kitchen sink was thrown in: WWE Wrestling icon Sergeant Slaughter (himself a former Marine and someone my siblings and I watched as kids) was introduced to the crowd first and would be available to sign autographs during the game. In addition, all fans received packages of baseball cards depicting many of those military service personnel introduced before the first pitch (a truly cool gesture.)

After these personnel were brought out and introduced (with nice ovations) to the crowd, another part of the sink came in the form of military paratroopers. Representing each service branch, the paratroopers launched themselves from a plane above, tantalizingly circled overhead for a couple minutes, and then glided individually onto the field. The final paratrooper ended the show perfectly by escorting the American flag proudly down against the backdrop of a setting sun.

We had had a late lunch before the ballgame, so as it turns out we did not partake of the food. We did see that besides the previously mentioned Bob Evans and Roosters, other Columbus institutions like City Barbecue and Donato's have food stands along with the stadium-based vendors. The prices seemed to be in the reasonable range from my quick glance of the boards with all the usual and one not too usual (couscous with veggies!) menu items.

The warm day did make me and the Mrs. thirsty for some locally-produced brew; however, the only option we were able to locate was a stand with a couple of Columbus Brewing handles. $9 for a large seemed to be a tad steep, but we weren't going to settle for anything less this evening and were happy with cups of their IPA and Summer Teeth seasonal.

The game itself was a pretty exciting back and forth affair, but it really was just part of a larger show. Along with the military personnel tributes, there were people anticipating the fireworks at the end of the game plus the numerous in-between inning contests to get the crowd involved. Deep down, I really got the sense that people were out here because it was simply a gorgeous summer evening, and the ballpark was the perfect place to spend that time with your friends and family.

By the end, the proverbial kitchen sink for many of us was full. Along with a handshake and an autograph from Sgt. Slaughter (I couldn't resist) and the giveaway cards, everyone received a couple of coupons for a free games at a local bowling alley (as a result of a Clippers' pitcher striking out the side in an inning) and a pretty nice fireworks show to close it down.

Suffice it to say, Mrs. 614orty-Niner and I had a really nice time at the ballpark, and we'll definitely be out there again. Perhaps these (paraphrased) words from a somewhat famous song by Chicago summarized our day there the best:


Saturday in the park
I know it was the Fifth of July
People reaching, people touching
A real celebration
Awaited for us all 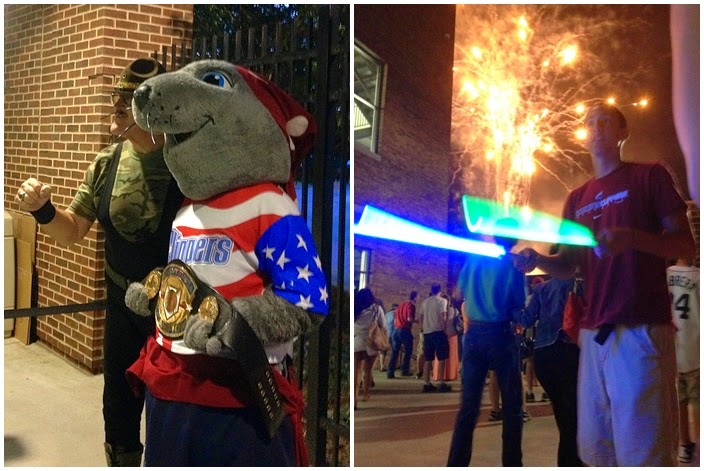