Buckeye Firsts: Putting in at Put-in-Bay 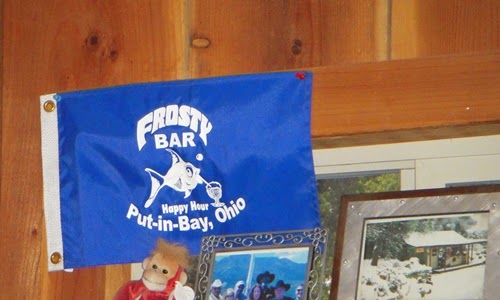 Go figure - my first encounter with the town of Put-in-Bay, Ohio, was smack dab in the middle of California gold country in the Sierra Nevada mountains in 2010.

Truth be told, I had neither a clue exactly where the unusually-named town was in the Buckeye state (I knew it was somewhere around Lake Erie) or what made it particularly special when my spouse (then girlfriend) noticed this flag for Frosty Bar proudly posted in the gift shop at Mercer Caverns in Murphys, CA.  I learned that Put-In-Bay was a popular summer destination and recreation spot for the locals located on South Bass Island on Lake Erie, but didn't learn too much more about the place until my spouse guided me for a visit there three years ago this July in what was my first big Ohio-based excursion. 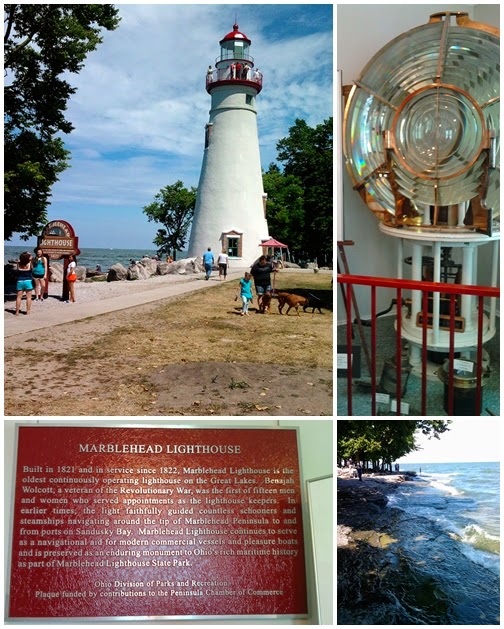 Before we made the trip over to Put-in-Bay, we took a side trip over to Marblehead Lighthouse, the oldest operating lighthouse on the Great Lakes. Built in 1822, this lighthouse has a history that mirrors most of the lighthouses my spouse and I have visited, related to improvements in technology and transfers over the years from one agency to another. However, each of these unique landmarks spins its own intriguing storylines as time wends forward, and this is no different here at Marblehead. The small fee ($2 per person at the time) we paid to access the top is worth it, if only to get the unique panoramic view that all lighthouses are designed to gather. From our vantage point, we were easily able to see the various Lake Erie islands as well as monoliths of speed that are the roller coasters of Cedar Point Amusement Park in Sandusky.

For those who don't own their own marine transport, the only way to get over to Put-in-Bay is by way of ferry.  Jet Express offers the faster method of transport in the form of catamarans with water jet engines, and its port on the island is closer to the downtown area.  However, since we were in no particular hurry to get over to the island or the downtown, we chose the more leisurely transport offered by Miller Ferry.  Aside from the cheaper fares (roughly half the cost of their competitors), they offer automobiles the chance to get on the island and allow people to bring their bikes along (for an additional fee.)

Once on the island, we strolled along the roads heading to downtown and I noticed one thing fairly quickly: Put-in-Bay knows what pays the bills (tourism) and there are plenty of opportunities for the city's visitors to separate themselves from their cash.  Bi-plane and helicopter rides, laser tag, golf (both the putt-putt and regular variety), bike rentals, museums, caves, historic buildings - you name it, this place probably has it somewhere. 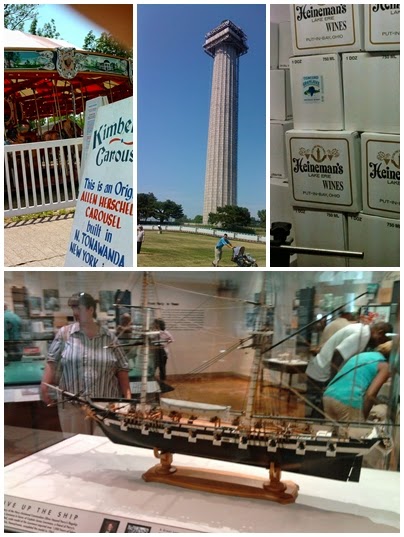 We targeted the basics on this visit.  My spouse (then-girlfriend) made sure I knocked out two Ohio culinary staples during our tour of the city. Having lived in California (and within stone's throw of the big wine producers), I knew that the Golden State had little in the way of wines produced by native North American sweet grape varietals such as Niagara and Catawba. Heineman's Winery, established in 1888, offers a rounded representation of what's out there in terms of Ohio wines for a casual wine fan and/or newcomer like me.  The tour ($7 these days) itself also proved fairly decent and included the Crystal Cave, where one could view the world's largest geode. My spouse and I tried a sampling of their offerings at $2 per plastic cup. While I have gone on to sample better versions of these varietals as time has gone on, at the time, these sweet wines proved refreshing on what was a very warm day. 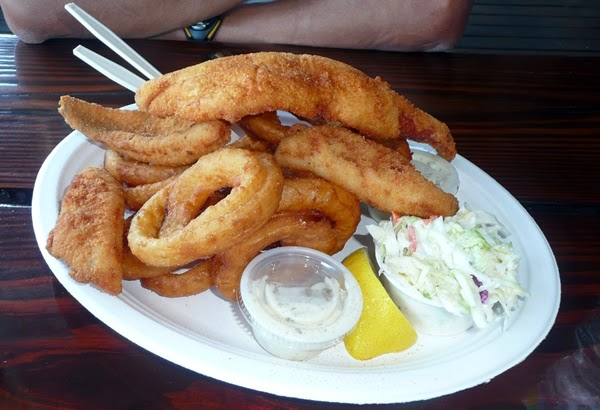 With no real food to speak of at the winery other than a cheese plate, we moved on into downtown to find something to eat. Unlike typical trips where we suss out good eats beforehand, we were here to seek out the second basic on the list: my first sampling of walleye and perch.  After wandering from place to place, we found what we were seeking at The Boardwalk.  Essentially, this restaurant acts as one huge concession stand on the Main Deck with three different options. Meanwhile, the Upper Deck is where you can receive more of a sit-down-style service, and then there's Rita's Cantina, which essentially acts as the restaurant's bar and general hangout area.  We stuck with the Fish Shak on the Main Deck for what seemed to be a slightly high-priced platter each of your basic fried walleye and perch, along with fries and onion rings.  Nothing spectacular about either preparation, which in this case provided the perfect neutral setting for my fish-tasting battle.  In the end, I preferred the walleye just a wee bit more, but would not turn down a good perch dish if I was in a seafood mood.

Finally, we traveled down to see Perry's Victory and International Peace Memorial.  Originally built to commemorate Commodore Oliver Hazard Perry's naval victory during the War of 1812, the memorial now stands as a symbol of the peace between the United States, Canada and Great Britain.  While we could not not go to the top of the memorial tower (one of the tallest within the continental United States) at that time due to ongoing construction, the live demonstrations (including firing of a cannon,) the historical artifacts and information within the visitor center, and the ample greenspace to amble around made this historical site well worth the visit.

On the ferry ride home, I remember sitting with an arm around my future spouse, breeze in our faces as our transport lumbered toward the mainland.  As I glanced over the water, the sun starting to set on the horizon from where I had traveled, I contemplated this first big travel excursion within this state and what I had with going with this then long-distance relationship and confirmed what I probably already knew deeper down.

Ohio as a new home?  Yeah, I can see that happening.  No problem at all...