Ice Cream Chronicles (Pt. 5): No Faking It at Johnson's 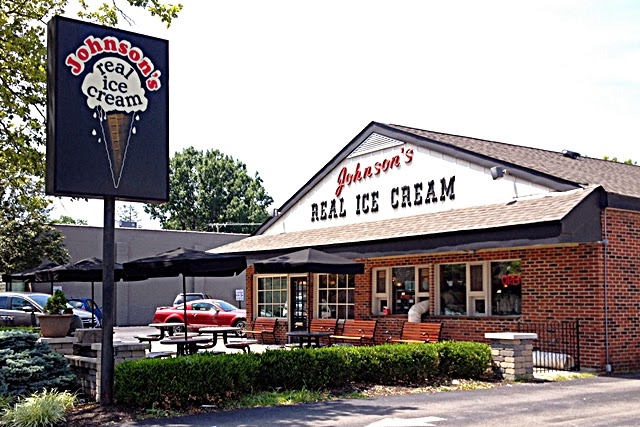 I admit my first reaction when I first saw the label for Johnson's ice cream pints on local supermarket freezer shelves was a bit of a joking one. I mean, does anyone really sell fake ice cream?

But then I thought more seriously about their label and the use of the word "real." I know back when they were established in 1950, the word was most likely meant as a reassurance to the consumer. This was the real deal product, produced in-house and fresh for your consumption.

But with the arrival of Graeter's to the Columbus area in the late 1980s, and the arrival of Jeni's two decades later, and just through more sheer familiarity with those two ice cream giants, this word gained a bit of a dare aspect. "Hey, give us a shot! We've got a fine product ourselves," was what repeated inside my mind.

This was a "challenge" that I was more than happy to accept.

Main Street through downtown Bexley is something of an ice cream lover's mini-mecca, with Jeni's, Graeter's and Johnson's in very close proximity to each other. Their building, a local landmark, has been expanded and spruced up a few times since their original 15' x 20' space opened for business. Even with those remodels though, one never loses the sense that Johnson's was born in a bygone era. I could imagine that someone who went to Johnson's as a child would feel the space is just as welcoming now as a senior citizen.

Johnson's has all the traditional novelty items available (cakes, pies, sundaes and even buckeyes) to please people of all ages; their flavors also tend toward the traditional favorites. However, Johnson's ties with local vendors was brought to the fore recently with their release of their special "Columbus Collection" of flavors, featuring products from local stalwarts like Crimson Cup Coffee, Sugardaddy's Sumptious Sweeties, Krema Nut and Just Pies.

I went for two scoops ($4) of flavors I know I'd enjoy as well as use for comparison. In general, I'd label Johnson's ice cream as pretty traditional in terms of mouthfeel, with just a hint of the denseness that Graeter's puts into their product. Johnson's Buckeye Blitz has been my favorite version of such so far, with a bright creamy peanut butter base and chunks of chocolate scattered throughout. Their butter pecan was also a no-complaint flavor for me, though I did like Graeter's version slightly better.

Prices seem reasonable all around, even extending to things like their T-shirts ($12.95) and their deli items ($7 or less,) an option not offered by their frozen confection competitors that I've visited. The walls also detailed their own special ice cream eating challenge, which involved four pounds total of ice cream and assorted toppings; those who beat the current time by themselves would get all that sugary dairy goodness for free.

To be truthful, I didn't have any doubts about the realness of Johnson's ice cream going into this tasting. I think the "real" in the name now points to my gut feeling after walking out. This is the neighborhood place that did good, has stood the test of time and continues to fit comfortably in your hand like a waffle cone freshly filled with two scoops of your favorite flavor.