Mini-Dipping: Downsized Doughnuts by the Dozen 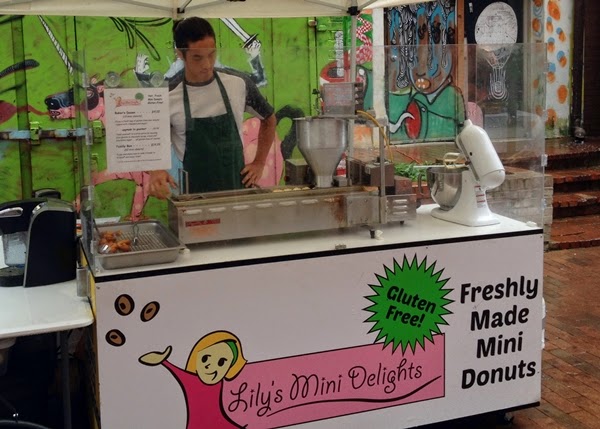 Freshly fried-up doughnuts within the reaches of Downtown Columbus is a fairly limited venture. Tim Horton's locations are found at the corner of Broad & High and next to Nationwide Arena, and those who have a later start date to their workday can drop by The Hills Market downtown and pick up the unique flavor combinations of Destination Donuts. The best bet for many, especially those who drive into work, is to pick up a dozen or two donuts from the numerous doughnut shops scattered throughout the Columbus metro.

For a couple months this year, I had the chance to sample some of the smaller but no less tasty fried creations by some relative newcomers to the local food scene. One newcomer is part of a movement that has become a topic of national debate, while the other mirrors a more traditional but oft-told tale. 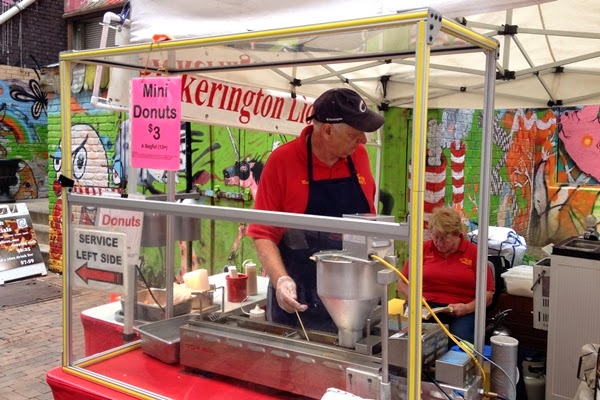 The benefits of a Gluten-Free (GF) diet has recently come to the forefront of the national conscious, as exampled in this Wall Street Journal article. Amidst this debate comes Lily's Mini Delights, which touts the GF-status of their donuts proudly on their cutely designed cart. In the latter category, we have Mauger's Mini Donuts with their more traditional mini-doughnuts. As detailed in this Pearl Market blog post, the two retired owners of this food stand started this venture as a fun way to stay active in their community.

Both Lily's and Mauger's use essentially the same mini-donut making equipment and offer a sugar/cinnamon mix as their standard doughnut topping. The only real difference at first glance, other than the price (Lily's is typically $1 more per dozen than Mauger's doughnuts), is the gluten-free nature of Lily's offerings.

Well, the proof of the pudding is in the taste and texture - how do they rate?

First, we'll start with Mauger's version. Their mini-doughnuts are fried up nicely, with a light brown exterior with easily distinguishable holes, a soft and pliable structure, and a light and airy texture inside.

In contrast, Lily's fried treats are more compact and rough-hewn at first glance. The person manning Lily's cart said some of their donuts need some added fryer time; this led to a slightly darker and crispier exterior for some of my doughnuts (an aspect I ended up not minding at all.) The inside texture was also definitely different, something of a cross between a Hostess Crumb Donette and a freshly-fried up churro. The doughnut was also quite dense - I started feeling full after after three-fourths of my bag was finished.

As far as taste, I don't think there was too much different between the two. Neither doughnut tasted greasy or showed any signs of being fried in older oil. And the cinnamon-sugar blend works perfectly well for both of these doughnuts, though other options are available.

Verdict? Traditionalists will probably lean toward Mauger's mini-doughnut, but I believe Lily's has a perfectly pleasant sweet treat themselves. If you see them around your local farmers market or festival, order up a bag, and share them with a friend. I bet that makes both your days just that much more happier.

(Note: I sampled these donuts when they were regular vendors at The Pearl Market in Downtown Columbus.)

2017 Update: Lily's Mini Delights appears to have gone kaput; their last Facebook activity was recorded at the end of 2015. However, Mauger's Mini-Donuts keeps frying away - for further updates on their latest events, please consult their Facebook page.
Posted by Joe