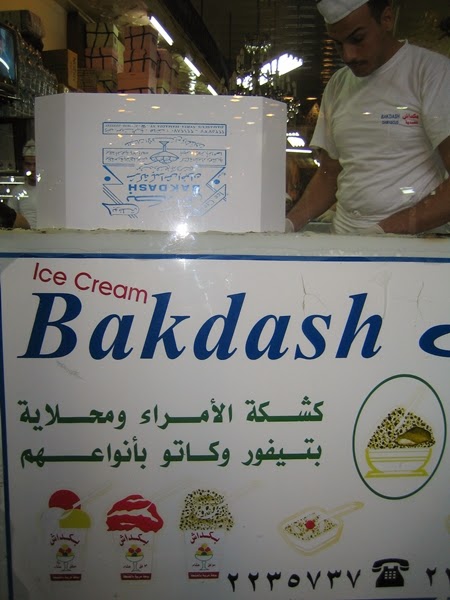 The countries of the Middle East have often made world headlines over the past several decades, and usually it has not been for pleasant reasons. Political, religious, factional and nationalistic differences from countries in and out of the region have led to numerous violent outbreaks, with the re-igniting of the Israeli-Palestinian conflict the latest in this long line of strife.

Prior to this, Syria had been at the forefront of these headlines not too long ago, when the region-wide "Arab Spring" movement turned into a bitter civil war between groups of rebels and the long-standing ruling government. This conflict, now more than three years running, has caused many people to flee the country for neighboring countries such as Egypt and Jordan.

In an interesting twist, I read recently that the well-renowned ice creamery in Damascus, Bakdash, has become a victim of the civil war in its own right. As detailed in this NPR story, Bakdash has opened up a new location in Amman, Jordan due to the decline in business in Syria and the influx of refugees into Jordan. Upon learning of this story, I feel even more fortunate now that I was able to sample some of their uniquely crafted treats during a far more peaceful time during a work detail Damascus several years ago.

Damascus, said to be one of the oldest continually inhabited cities in the world (there is some debate about that distinction), turned out to be a fascinating city where ancient and modern, Arab and Western, rich and poor, and other stark contrasts could be found almost every minute if one looked hard enough. This stark contrast also translated to the food in a more pronounced manner. Anything that tended to mimic Western-styled themes or concepts was often times odd at best and simply not enjoyable at worst (yes, I did try a local version of the Skyline Chili Coney Dog to my chagrin.) If you stuck with the local food, you were almost guaranteed to have a good to great meal.

One of my personal favorite trips was when the group decided to head into the older part of town to Souk Al-Hamidiyeh, typically the busiest market in the city due to its tourist attraction status. This market has just about everything the shopper could want, both local and visitor. Spices and other food basics, home furnishings, toys, sweets, clothing - you name it, you'll find it somewhere within this market's vast expanse. Using the famed western entrance, you are greeted with a walkway covered with an iron roof that is riddled with bullet-holes from early 20th century conflicts. It is here where Bakdash has plied its craft making its ice cream (or, as the locals call it, booza) since 1895.

Prior to the trip, my research revealed this was one of those must-visit places. Indeed, no matter when we dropped by the market, there seemed to be a line extending from inside. As it turned out, the spectacle created by the crowds milling inside and around the store along with the employees plying their craft was as much of an attraction as much as the ice cream itself.

One man churned/pounded the ice cream (made up mainly of whole milk, sugar, mastic and orchid flour) in a cooled chamber with a large wooden.  When it had reached the right consistency, he wedged the ice cream from the bottom and handed the mass over to another worker. This worker then pulled chunks of this glob out and rolled them in pistachios. Other workers would assist in the placing the ice cream into bowls and adding other toppings as requested as customers queued by. The standard order costed about $1 at the time, with add-ons available for additional cost. 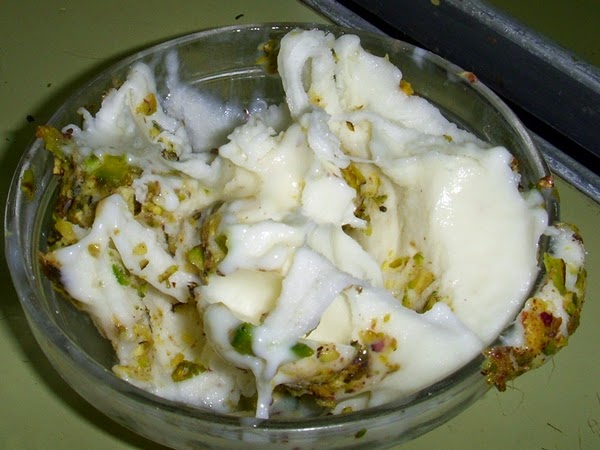 Upon first look, my instinct upon seeing it was to think vanilla, but that was nowhere in the smell or flavor profile. Indeed, the base ice cream was a lot like a slow-to-melt ice milk, with a unique flavor profile and a flowery scent. Texture-wise, it was chewy and gooey like a warmed up taffy or thick melted cheese. The freshly chopped pistachios provided the dominant and tasty flavor.

Bakdash's ice cream ranks as my most unique foray into the ice cream world.  While the ice cream may not be my most favorite taste or texture-wise when compared to . However, it remains one of my most memorable, representative of the time where I got to indulge in another area of the world's rich culinary traditions.

(Those who would like to see the process used at Bakdash to produce their unique ice cream can reference this video taken at their new location in Amman, Jordan.)