Going Back To Buellton: Firestone Walker/Barrelworks

Yes, the thought of leaving sun-drenched lands such as San Diego did give my spouse a tinge of sadness; this feeling was further enhanced as the skies grew more overcast and the a persistent mist to light drizzle met us as we traveled out of the greater Los Angeles metro northward.

Yet, we actually still had something to look forward to on the long trip back to the Bay Area, courtesy of a detour we knew we needed to make, to complete a journey over three years prior that had been derailed by an inadvertent early arrival to a prime destination on an otherwise excellent Christmas-time trip down to the Santa Ynez Valley some three years ago,

We were headed to Buellton, and if things went to plan, this would be a rather tart affair. 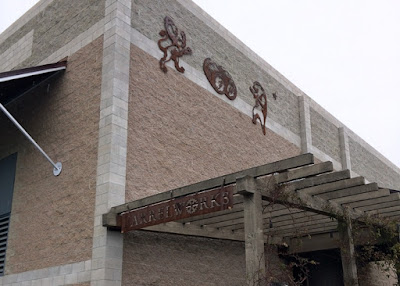 Started in 1996 by a descendant of the Firestone Tire Company (Adam Firestone) and his brother-in-law David Walker, Firestone Walker Brewing has earned a reputation as one of the best breweries in the world. Its Invitational Beer Fest has been drawing some of the best brewers in the world to its Paso Robles home since 2011, and its partnership with Belgium's Duvel Moortgat in 2015 promises to break Firestone Walker into overseas markets.

The Barrelworks portion of Firestone Walker wasn't quite one year old yet when we had first visit, having just been established by the brewery in Buellton (about 90 minutes south of Paso Robles) as a dedicated facility to house its barrel-aged wild and strong ales. Matched up with a taproom featuring the brewery's flagship beers and a restaurant, their complex only added to the attractions in the area, along with nearby slice of Danish life Solvang and the numerous wineries of the Santa Ynez Valley. 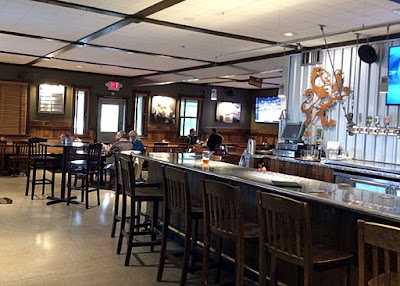 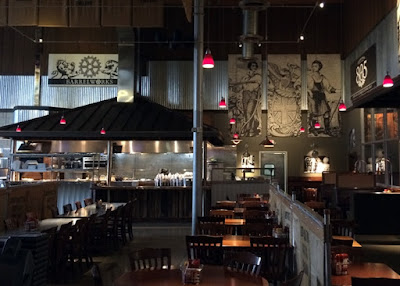 There was only one problem with our first visit: as we found out, the Barrelworks portion of the complex was only open on weekends, and we had arrived one day too early. We did soothe our disappointment with an assortment of their flagship beers at the taproom, but we vowed that day to come back. We also got a bit of a side bonus with this return trip, in that our destination was the perfect midway point to stretch out our creaky bones from our car journey back to the Bay Area.

I admit I don't remember if there was a separate entrance back when we first visited, but it was cool to go through the Barrelworks-specific entrance this time around and walk among the stacks of barrels full of  luscious liquids. 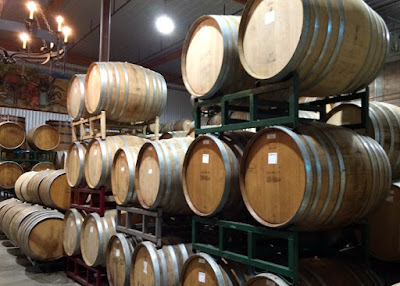 Firestone Walker's Buellton facility offers a mishmash of concrete block and industrial metal warehouse, made more welcoming by touches of rustic wood walls and furniture, brewery and artistic media, and, especially in the restaurant, large glass windows to let in sunlight. The Barrelworks taproom lies pretty much smack dab between the restaurant and the barrel storage area. 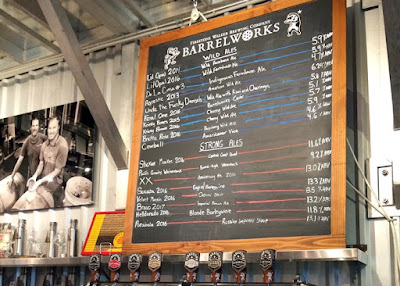 Like before, Barrelworks sported barrel-aged versions of both their strong and wild ales; despite the temptations of what we knew were tasty brews (the Sucaba Barleywine and Parabola Russian Imperial Stout), we were here to venture into the unknown with the wild ales. 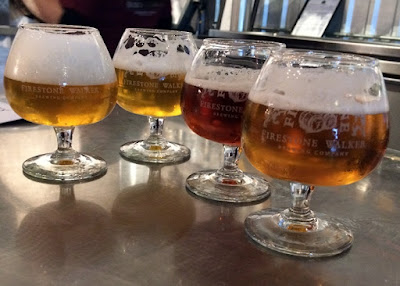 Well, the three year wait turned out to be worth it. Helped out by Angela our beertender, the sours we sampled were easily some of the best we've had, rivaling other experiences we've had at places like Santa Rosa's Russian River and Asheville's Wicked Weed. Even here, two brews stood out, and they all shared the same name. Batch two and three of Krieky Bones, their wild ale brewed with sour cherries, were both excellent, with one a little more cherry forward and slightly sweeter, and one with a little more pucker.

Thankfully, Barrelworks had nicely-sized (375 ml) bottles of their more newly released sours (including the Batch 3 of Krieky Bones) available for purchase, and we were only happy to oblige to grab a few home with us for a special occasion or two.

Hopefully, it won't be another three-plus years before visits next time around.