I remember being asked in jest by one of my spouse's friends shortly after my first winter here in Ohio if the cold weather had scared me away yet.  As it turned out, other than having the two coldest, iciest days of that season take place on moving days, it really wasn't all that bad.

Another colleague butted in immediately after my response, "Oh, no, you really haven't experienced an Ohio winter yet, trust me." Sure enough, the next two winters, including the dreaded "Polar Vortex" winter, froze me to my bones, but they say what does not kill you makes you stronger. Ohio had officially toughened me up.

Fast forward to the present - I think most Central Ohioans would be in happy agreement that for the most part, winter has been a no-show this season. I mean, patio weather in February in the Midwest region in general is something to, well, spend some time on the patio hoisting a beer or two.

Or maybe down a couple cold scoops of ice cream. It seemed it was time to revive the Ice Cream Chronicles for the new year. 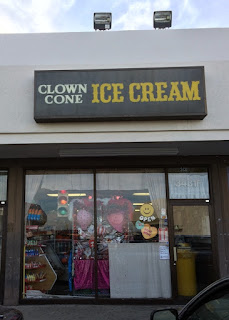 Clown Cone was something of a mystery to me. Unlike some of Columbus' more famed purveyors of ice cream I have found like Jeni's, Graeter's and Johnson's Real Ice Cream, there really wasn't too much to read online beyond a small smattering of reviews and a random article or two.

Doubling the unknown factor was its location in one of the more unique strip malls I've encountered. The building layout of the 60-plus-year-old Northern Lights Shopping Center, sandwiched between the Northland and North Linden neighborhoods in an area on Cleveland Avenue that's seen better days, resembles a tilted half-moon (or, if you stretch your imagination a bit, a section of the Death Star) from the air. The larger retail buildings arc away and back to the main thoroughfare, with a phalanx of smaller retail spaces lining the main street itself.

Even here, the quirky layout has some quirks. On the north side of the property, and essentially behind the main facade of retail, an empty building which once held the location of the original Mr. Bill's Bowling Center still stands, abandoned after a fire severely damaged its interior.

And then, in what seems to be an alleyway to the back of the center of the property to the west, lies what is essentially a triangle-shaped plaza with a some smaller storefronts. Here is where you will find Clown Cone. 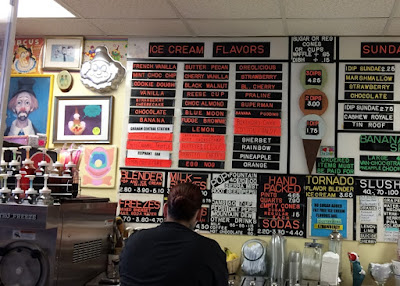 Clown Cone's interior is about as quirky as the shopping center it resides. Advertising itself as a triple threat ice cream, candy and gifts shop, the owners pack a lot of stuff inside a really cramped space, even more so when folks are pouring in clamoring for ice cream like the day of my visit. The queue to get service on my visit day was somewhat disjointed because of this, but the staff behind the counter kept things more or less in order, scooping out dips with a smile.

Not surprisingly, figurines and prints of clowns can be spotted throughout the space. Neighborhood kids hold court near the candy section constantly, while an odd mix of gifts, including a fairly extensive collection of plastic-wrapped salt and pepper shakers, gives you some eye candy while you wait for your order. 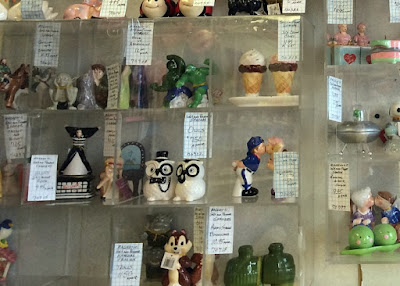 The ice cream served here seems to be mostly if not all supplied from Ashby's Sterling Ice Cream out of Michigan, and contains all the usuals and select not-so-usuals like Sangria Swirl Sherbet and Caramel Chocolate Chip Cheesecake. The latter sounded like a little too much at once but intriguing enough to try, and I was pleasantly surprised by how good it was. In fact, it was much, much better than my somewhat meh scoop of my always have-to-get-a-scoop-if-they-have-it Butter Pecan. Even better, the prices here are very pocketbook friendly for pretty much all their ice cream creations and assorted slushies. 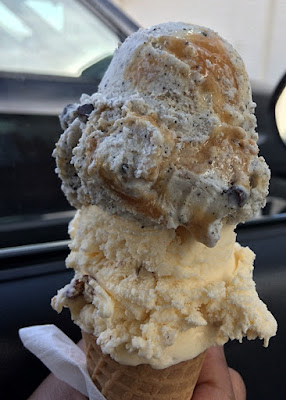 In reality, Clown Cone will most likely never make a nationally-published "must-visit" list of Columbus ice cream joints, being nowhere near a neighborhood tourists would generally venture to. Clown Cone will also probably never be classified as "hip" or "cutting-edge" or "gourmet."  But in a way, this quirky creamery serves a more important function as a neighborhood magnet that area residents can rely and look fondly on, especially considering the shop has been operating for more than forty years. Here's hoping that the Clown will be scooping dips for another forty more.