Seal Pups and Fish Tacos: A Day in La Jolla

Perhaps the most idealized perception of what a beachfront community like La Jolla aims to project came through very early during our visit, when we passed a rather nattily-dressed senior couple, toting their bicycles next to them, along the main trail

"We kind of got a late start today, dear."
"Oh, really?" The man glanced casually over to his silver-haired companion.
"Yeah, it's already past ten in the morning."

Hmmm, if getting out the door for a causal bike ride after 10 AM when I'm older is wrong, I don't think I ever want to be right.


The distance between La Jolla and downtown San Diego (approximately one dozen miles) may lead one to think this area is its own city like other California coastal communities like Carmel-by-the-Sea, Fort Bragg, or Crescent City. However, a little more deeper look into the reeds shows that like other nearby communities such as Pacific Beach, Mira Mesa, and San Ysidro, residents here fall under the jurisdiction of the city of San Diego.

Truly, though, these municipal details matter little, if at all, once you get a glance at the area's spectacular shoreline. 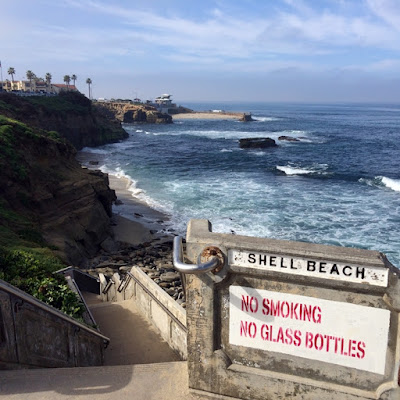 For the up close spectacular views, the La Jolla Cove area south to the breakwater will give the visitor the most bang for your buck. Here, seagulls are plentiful, but one can occasionally spot cormorants, ungainly but highly effective fishers of the sea, resting on the cliffs, or perhaps a gaggle of chipmunks scurrying about the jagged rocks. Perhaps the most spectacular sight are the pelicans, arcing down to skim just above the ocean surface, as if daring the ocean waters to crash into them.

Humans are plentiful as well, whether its simply to stroll by the seashore or one the numerous en plein air artists, painting nature's beauty on their canvases, and hoping to land a sale or two to help continue one of the harder-to-beat ways of making a living.

As you can imagine, the area is conducive for quality time together with the family. La Jolla Cove itself has a small sheltered beach - here, activities are limited to scuba diving, swimming and snorkeling, but views of both the cliffs up close and the shoreline afar more than make up for it. It's also perfect in the relatively safe environment to allow little children to play tag with energetic, onrushing ocean waves. 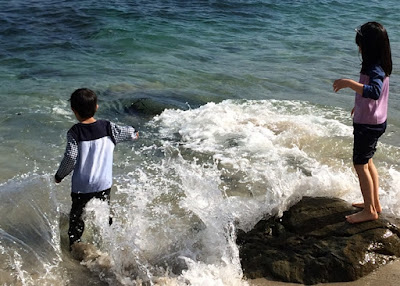 Coming in the winter months also brings a bonus feature in the form of seal pup season. As we strolled southward, we spotted random herds of seals lazing on the rocks below, but the real jackpot lay in the beach area in the breakwater.  Normally another place for humans to soak up some sun, the sands here were off limits to allow nature to take its course.


As we found out, these seals are pretty much ready to handle themselves in the water almost right from the get go.  Looking out on the ocean side of the breakwater, a couple of pairings of mom and pup were heartily handling the relentless wave action, with the mother seemingly providing the example of how to surface properly.

By contrast, the beach to the north of the cove, near La Jolla Shores, provides a much more utilitarian but no less important purpose. This is your classic do-anything beach, where kids can build sand castles, adults can sunbathe for hours at a time, and active types can launch into pretty much any water-based activity you can imagine. I personally have gone swimming in these waters with friends on a previous visit to the area; on this visit, my spouse and I kept it relaxed and low-key, allowing the gentle surf to splash the cold Pacific Ocean waters over our bare feet as we walked along the sand. 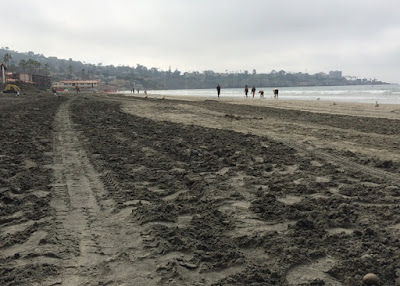 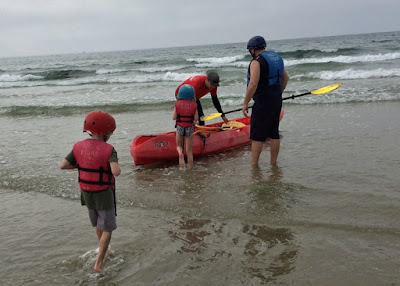 We had originally thought about having lunch outside of town, but our beach wanderings ended up (happily) lasting longer than we had planned.  After do a quick look over of options, we thought a dabbling into the area specialty, fish tacos (something I once thought sounded like a vile concoction; more on this on a future post), would be a perfectly sized lunch. 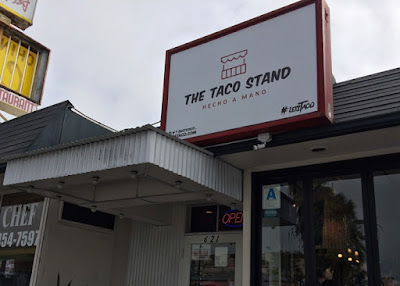 Declaring something the best rendition of a rather plentiful regional specialty is really an impossible task, so I will not even make that attempt with La Jolla's The Taco Stand. What I will say with this local institution (two other locations exist in Downtown San Diego and Encinitas) is they put on a very good impression even before you get your food. 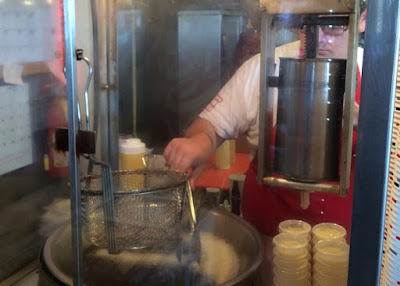 In what turned out to be a growing line throughout our stay (we lucked out and just beat out the local lunch rush), we couldn't help but be impressed by churros being fried in hot oil directly in our sight lines.

Or how about the long rack of hot sauces (most of them from El Yucateco)  we spied lining the far wall after we had placed our order?

Or maybe consider the woman to the rear rolling out freshly kneaded masa to be pressed into freshly grilled tortillas as we gathered in our tubs of freshly-made salsa from the condiment bar?

And despite the presence of a fountain pop machine, you just can't not go to a place like this and not grab some Mexican sodas (a Grape Fanta and Senorial Sangria, in this instance) from the fridge. 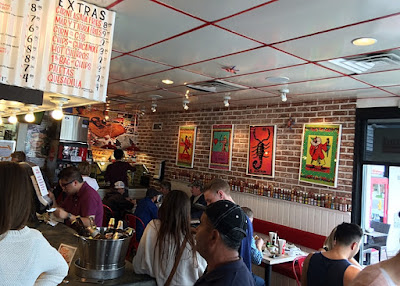 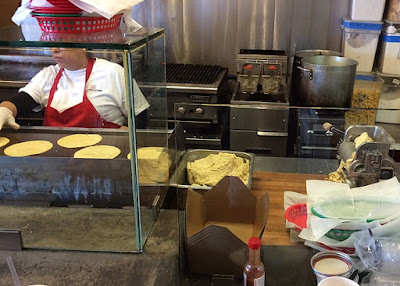 Thankfully, our tacos also made a similarly favorable impression - these were well-constructed, bright tasting constructs, with the only slight quibble of not enough spice from an item advertised as spicy (the Camarones (Shrimp) taco I ordered - the salsas from the condiment bar took care of that anyhow.)  My spouse ordered both the grilled and battered fish tacos and, in our very admittedly limited sample size, The Taco Stand's are the best we've had the pleasure of eating.  If nothing else, they'll hold the enviable position of measuring stick for future renditions we encounter. 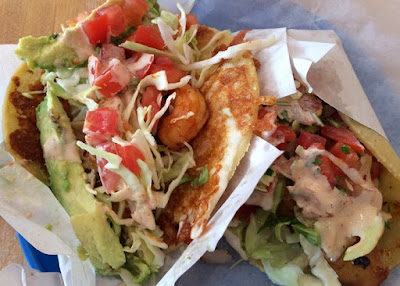