Gonna' Soak Up The Sun: Sauntering into San Diego

One downside that I have discovered about moving to the Columbus area (one that my spouse warned me about) was the area's high ranking in the cloudy day charts: in fact, it rates as one of the Top Ten Most Cloudy Cities in the United States.  As my spouse further explained, by the month of February, any chance to escape for more sunny climes, even for a few days, is a welcome one.

Well, this year provided us the perfect opportunity: a planned big family gathering in San Francisco gave my spouse and I a prime opportunity to add on a few extra days for some extra sun-drenching. After a quick look, San Diego seemed to be a prime hunting ground for this quest, and a warm temperatures on departure day seemed to portend a good few days ahead. 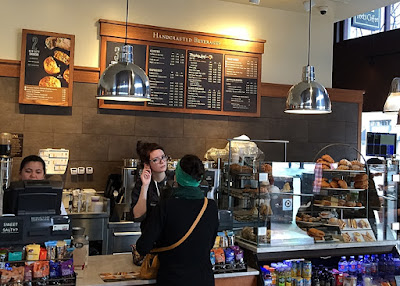 Despite what was in my opinion their botched move into Ohio, Peet's Coffee remains my favorite grab-and-go coffee when I'm in California. With a nine-plus hour drive (taking into account needed stops and Bay Area morning rush hour traffic) ahead of us, there was no time to seek out a more local vendor convenient to our route on this go around. A quick stop in their Pleasant Hill location allowed me to go nostalgic with a slice of their Chocolate Cherry Bread (my consistent go-to while I worked in the area) as well as to sample a nice new addition to their drink menu in their Iced Havana Cappuccino (my spouse went with an Iced Latte and Ham & Cheese Croissant.) 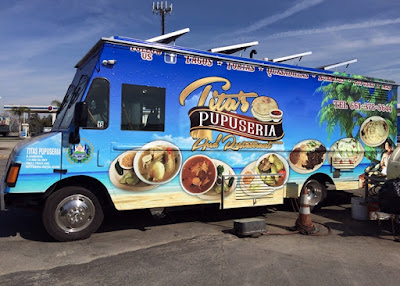 Our initial lunch stop along Interstate 5, the quickest route generally for going down to Southern California, was planned for Kettleman City, which would be our one stop at In-N-Out Burger for the trip. However, we made much better time than we figured and decided to venture farther down the road. We ended up as far as the State Route 58 and Buttonwillow, where we found a much more much more appealing fast food option than normal in the form of Salvadoran Pupusas. 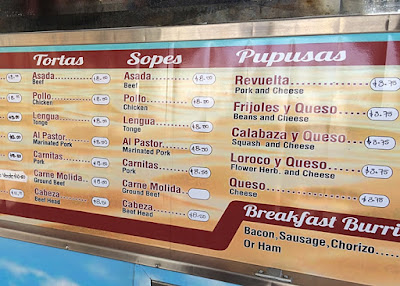 Tita's Pupuseria, which has operated here since 1997, has two locations in the area which bookend a Motel 6 in the area, including a food truck and a brick-and-mortar. While the latter might prove to be the better option if you have a little extra time on your hands (as noted by this 2016 Bakersfield.com article), the food truck turned out perfectly fine for us folks on the go. In this case, the truck had the usual Mexican staples like tacos and burritos as well as those desired pupusas. 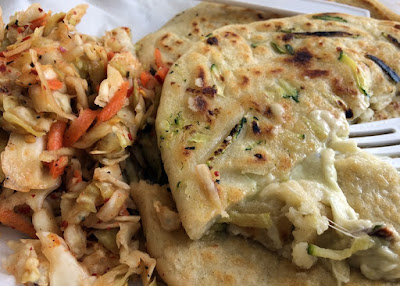 As it turned out, these creations hit the spot, slightly floppy from both the large diameter and the generous quantities of cheese within, accompanied by a lightly spicy, crispy curtido and a mildly tangy, tomato-forward sauce. Those wishing for more of a kick need only grab some salsas from the condiment bar, which included a very tangy green tomatillo and a well-balanced habanero.

Unlike other big metropolitan areas I have driven into, most of the main Interstate freeways into the San Diego give little hint of the skyline of this city of just under 1.4 million people (in fact, the most prime view might be from driving westward into downtown on California State Route 94, a scenic drive all unto itself, as noted in this Sunset Magazine article.)

Mainly, this phenomenon is due to geography and the numerous hills which cross the metro area that limit the panoramic view possibilities.  Interestingly enough, in what seems to be a counter-intuitive move, one really needs to travel west from this shore-side metro and then jog southward to the end of Point Loma, where one can find the Cabrillo National Monument, run by the National Park Service 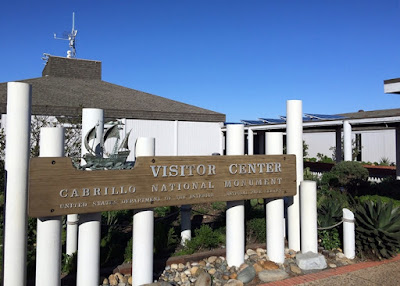 The monument's namesake is from Spanish explorer/conquistador Juan Rodriguez Cabrillo. Suffice it to say, the actions and explorations of Spanish conquistadors like Cabrillo will be the source of lauding and/or derision depending on your own personal interpretation of history. Nevertheless, when it comes to California, Cabrillo's explorations had a long-lasting (if delayed) effect on the area and the Native tribes. Started in 1542 and founded on a quest for mythical rich cities and a water passage between the Atlantic and Pacific Oceans, Cabrillo and his crew were the first Europeans to set foot on California lands from San Diego up to the mouth of the Russian River, just north of Point Reyes.

Interestingly enough, the exploits of Cabrillo, who ended up dying by gangrene barely six months into his journey, were pretty much ignored by the Spanish government, as they didn't go back to any of the areas documented by him until the mid-1700s. In addition, Cabrillo started a two-century-long trend for mariners sailing through the area by completely missing San Francisco Bay, which presumably was shrouded in fog when he sailed by (it wasn't until 1769 when Gaspar de Portolà found the area by accident after sailing past their Monterey Bay destination.) 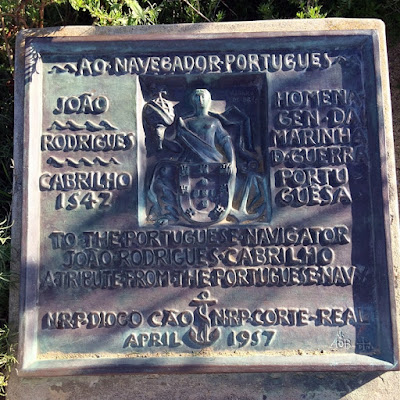 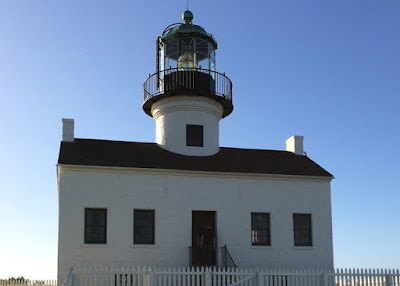 Cabrillo National Monument is also home to the original Point Loma Lighthouse. Situated at just over 400 feet above sea level, officials who built the structure in 1855 thought its height would be a bonus. Indeed, as noted in one of the displays inside this austere structure (even as lighthouses go), one mariner reported seeing the light from almost 40 miles out to sea.

As it turned out, the height was a severe disadvantage on many nights, mainly because the light would often clouded or obscured by low-hanging clouds or fog. It took only 36 years for the lighthouse to be decommissioned, but it remains well preserved as a snapshot of a simpler time. If one glances down from the observation decks nearby the old lighthouse, one can spot the replacement lighthouse holding court near sea level close to the actual tip of the Point Loma Peninsula. 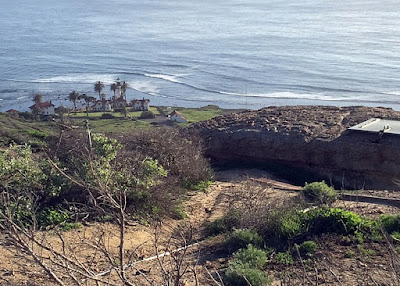 In general, the Cabrillo National Monument is well set up for panoramic viewing, whether its out to the Pacific Ocean (the area just off the point is prime for whale watching during winter months) or back toward San Diego itself, to catch the constant transit of ships, helicopters and planes (both commercial and military) through the area.

It is also ideal for some up close nature viewing: chipmunks, geckos and small birds dart without a care in the world through the scrub and abandoned military batteries up top, while venturing on roadways down near the ocean gives visitors a chance to dip their feet in the cold Pacific Ocean or peer into the numerous shoreline tide pools.