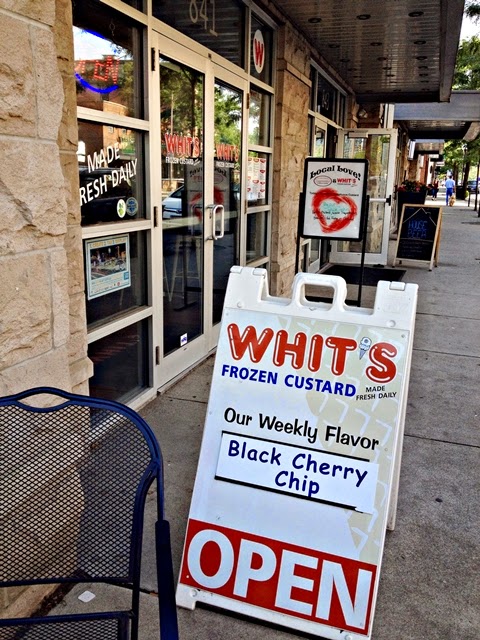 Custard is essentially ice cream's creamier cousin, a texture that is achieved mainly through the addition of egg yolks to the mix. Generally speaking, this was something that was pretty much unknown to me throughout my life. Regular and soft serve ice cream, and in my latter California days, frozen yogurt, sorbet and gelato were in the rotation when I wanted a frozen treat of some sort.

Columbus, as it turns out, has a several options for custard, including Pennsylvania-based Rita's (who are more well known for their Italian ices) and Culver's out of Wisconsin. But really, these ice cream chronicles have focused in on Ohio mainly, and there's no better candidate for a visit in this category than Granville-based Whit's.

Whit's is a relative newcomer, having reached it's 10th anniversary as a company just last year, and sports 22 locations mainly in Ohio (singular stores can also be found in Asheville, NC, and Atlantic Beach, FL.) in the Columbus metro area, the company has outposts in Gahanna, Dublin, Hilliard and the Short North neighborhood, which is where I dropped by one recent early evening.

Unlike your typical ice cream shop that boasts a lot of flavors, Whit's goes in the opposite direction. Their custards are made fresh daily Vanilla and chocolate are their standard everyday flavors; in addition, they boast both a weekly flavor and a flavor of the day. If someone's favorite flavor is not featured, they can more likely than not find it in pre-packaged pints in their freezer; cakes are also available for toting home.

Customers can take the in-store flavors and request all the usuals (sundaes, blends, etc.) One particular local option that stood out was the ability to blend your custard with the delicious brownies and blondies of locally-based Sugardaddy's. Also, a few non-custard food items like hot dogs and a couple of sandwiches (pulled pork and shredded chicken) are available at inexpensive prices (from $1.50 to $3.50.) 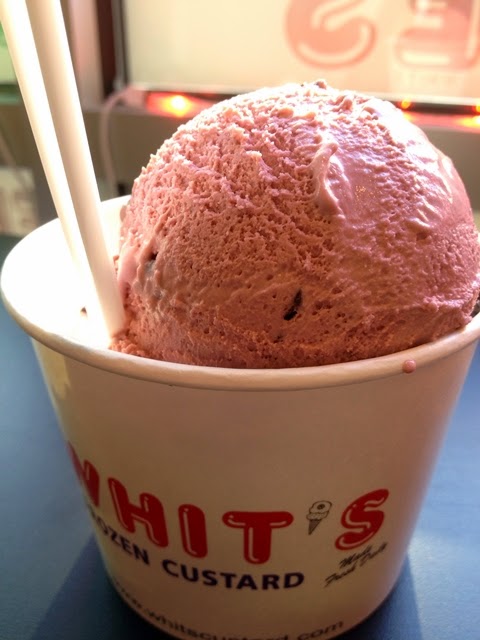 With butter pecan only available in a take home pint, I went two scoops ($4.25) for one of the limited-time flavors (black cherry chip) and the always offered vanilla in a cup.

The custard at first glance looked like regular ice cream, but the mouthfeel immediately told me this was a different beast altogether. As I slowly devoured my scoops, I began thinking how all the soft-serve cones I have eaten in my life would've been so much tastier if Whit's was the source.

As for my choices, black cherry chip will please fans of the flavor with its plentiful chocolate chips and juicy cherry halves. The vanilla was solid; I thought, similar to a good basic frozen yogurt tart flavor, it provided great base for any of the blends, sundaes and creations on Whit's menu.

Whit's Short North store blends in nicely with the neighborhood vibe, with a relaxed yet funkified interior (including a graffiti-version company logo and assorted pop-culture references) and flyers and other printed information for nearby events available. 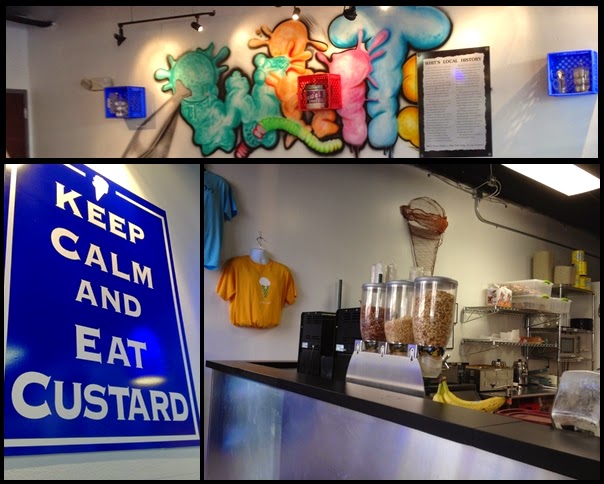 Whit's has definitely turned me on to the world of frozen custard based on this first sampling. I look forward to going back not only to sample more of their offerings, but also to compare and contrast that they offer to versions in other parts of the country, including those have popped up in my old Bay Area stomping grounds such as like Lexie's Frozen Custard and Frozen Kuhsterd.