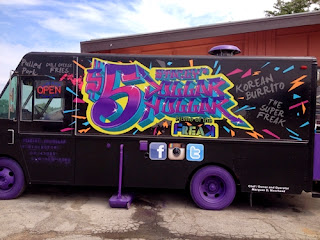 The Northern California food truck scene had long reached the maturity stage by the time had departed for the Columbus area late 2011. Well-established congregation areas for the new wave of food trucks such as Off The Grid were commonplace, while the old-school taco truck areas along International Avenue in Oakland and other Bay Area locales continued to chug along as usual.

Columbus' food truck scene has grown quite a bit since I've been here, and while it is still somewhat a work in progress, the momentum is there to make it an established part of the community. Regular events and congregation spots like the Food Truck Court in Columbus Commons and Dinin' Hall in Franklinton seem to be doing well.  In addition, a host of new Columbus-based breweries (another similarly exploding scene) have regularly scheduled food trucks to provide some tasty eats with their brews.   And similar to the Bay Area, Columbus has its own taco truck areas to boast about, concentrated mainly along the southwest and northeast quadrants of the metro area near the I-270 beltway.

Recently, I was on a rare day away from my usual lunch environs due to a doctor's appointment.  which meant I had limited time to dine.  Thus, my minimum preference was to find a place that both was along the way and where I could get fast service without it being traditional fast food.  Additional preferences would be to try a place I hadn't been to before and sporting something cuisine-wise that I hadn't tried recently.

My mind's gears were spinning as I was driving from the Ohio State main campus toward Upper Arlington when Stacey's Five Dollar Hollar, a food truck stationed at the corner of Kenny Lane and Lane Avenue, came into sight. 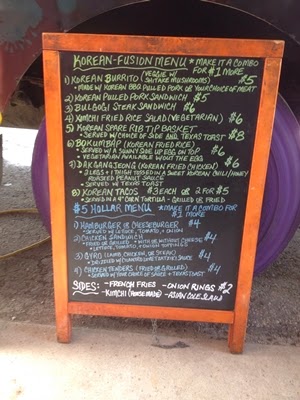 It definitely fit the first two preferences and would probably fit the third, provided it wasn't too busy.. In addition, I recalled from local media articles I read that their focus was a Korean/Southwestern fusion, and that boded well for my generally spicy-food loving self.  So why not?

Upon reviewing the menu, I saw that Stacey's had just about every quick grub thing you can imagine (hamburgers, gyros, french fries, mac & cheese, etc.) in addition to their Korean fusion items.  Their signature item seems to be "The Freak" sandwich, a hearty grub item where you can throw just about anything they have onto a 12" slab of bread (there's a twice-the-size "Super Freak" and the smaller "Freak Jr." available well.)  But today, I was determined to have Korean and ordered up two Korean Tacos and a side of onion rings (see, I told you they have just about anything) for $6. 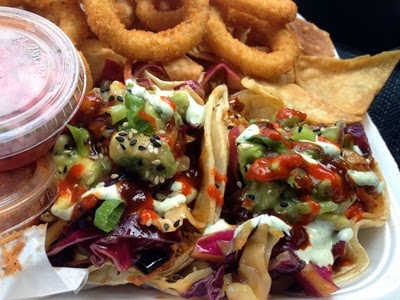 As it turns out, you don't have to order "The Freak" to get a lot of food, because there was plenty in my tray for me to munch on.   As with anything touted as fusion, the amount of cuisine x to cuisine y is going to vary; in this case, the tacos were pretty much southwestern with a Korean tinge.  This ratio went more to the latter when I mixed in the small tub of Asian slaw and the very tasty gochujang salsa (tomato salsa w/Korean chili paste) into the tacos.

The onion rings were almost certainly not from scratch, but I do appreciate that option in general and they were fried up well.  In addition, there was a smattering tortilla chips thrown in to add a little crunch to the bounty.

Bottom line: even if the Korean ratio might not have been as high as I might've wanted it, I did enjoy my tacos and I did get quite a bit of food for what I paid.  The service I received was both prompt and friendly.    Overall, folks who are sporting both big appetites and somewhat tight pocketbooks could probably do a lot worse than grab a bite at Stacey's.

2017 Update: Stacey's Five Dollar Hollar food truck operations appear to be officially halted as of the end of 2015.  However, the related Facebook page still seems to be sporadically updated.
Posted by Joe