Those who have read my blog before know that we are huge fans of two well-known California breweries in Firestone Walker and Russian River Brewing.  With the former, we had visited their two co-joined facilities in Buellton (their taproom and then their sour-focused Barrelworks facility - this blogpost details how we ended up visiting each separately), and for the latter, their iconic Santa Rosa brewpub seems is something of a mandatory stop when we're in the area, even if it is just to buy a couple of bottles of Pliny The Elder or one of their lovely sours to bring back to Ohio.

One would think that we're traversing over well-trod ground by writing about these two breweries again, but two recent developments for each brewery offered an opportunity to explore some new ground for us, and we were only more than happy to venture in again. 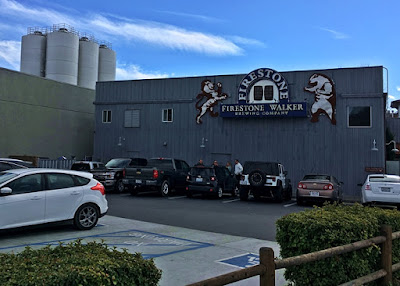 For Firestone Walker, it was the shattering of the adage that you only have one chance to make a first impression. We were already looking forward to dropping by the location of theirs we had not visited in their Paso Robles home campus, but a chance connection made years ago with Jemma Wilson, their Social Media Manager, made it even more special.

When she heard that we were dropping by during the holidays, she treated us as if we were a first-time visitor, setting us up on a tour and helping us scout out Paso Robles for other destinations (in fact, the excellent Tablas Creek Vineyard was her suggestion, and she confirmed that our experience at Los Robles Cafe on a previous visit was still the one to make for Mexican breakfast.) In many ways, this special treatment was like the luxuriant foamy head on top of a delicious imperial stout. 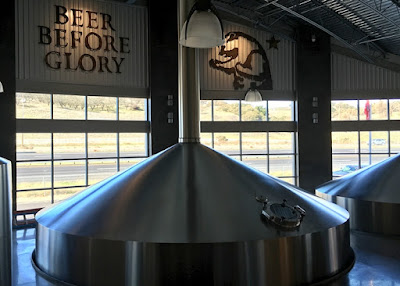 As we learned on our tour, much has changed since our last visit to their sour-focused Barrelworks facility in Buellton in February 2017, fueled mainly by the popularity of their 805 Blonde Ale. Initially intended for distribution only in 805 area code, the beer gained an unexpected following, even leading some to mule the beer to surrounding areas in an attempt to brew it themselves.

Similar to Stone Brewing's Arrogant Bastard, 805 has become something of its own entity, with its own website and marketing campaign based around The Authenticos, explained on their website "as driven by the lifestyle and ethos of the people from California's Central Coast" and "free spirited and rooted in rugged individualism." 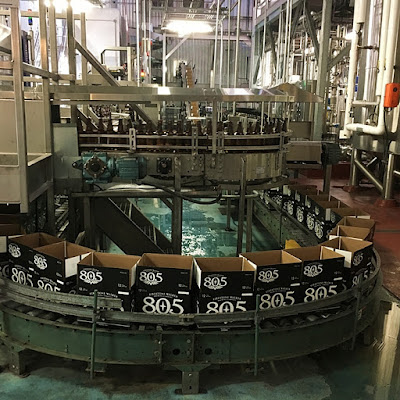 The brand's popularity prompted the brewery to undergo not only an expansion (one completed a few months after our visit to Barrelworks) and one that our tour guide Alex said allowed the brewery to "reclaim their weekends" with the addition of a 200-barrel tank strictly dedicated to 805. It also led to the brand new Visitor Center (where we started our tour) as well as other added production aspects that were not covered on the tour, but were informed could take a peek at at our leisure 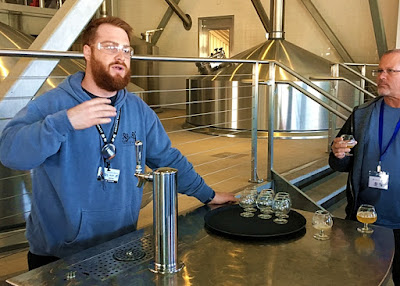 Our tour was overall pretty standard as brewery tours go (as I've said before, making a brewery tour truly novel is a pretty difficult thing to do), but was enhanced with samples at beginning, middle and end, as well as a nice little tchotchke gift bag at the conclusion of the tour.  From here, we made a quick trip to their main gift shop, The Brewery Emporium, where they have almost every branded item you can imagine as well as the brewery campus's largest beer selection for purchase. 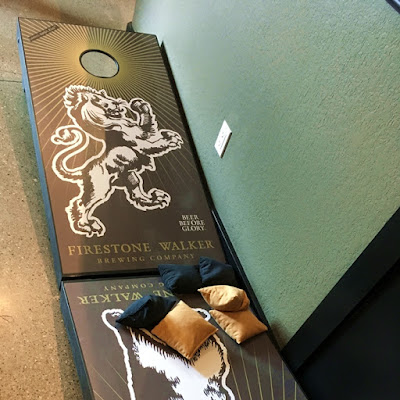 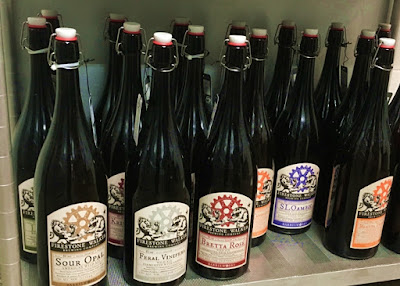 We then ventured over to another part of their campus to grab a seat at the bar area of their restaurant space. Grabbing a few items from their gourmet-styled pub menu (the slightly greasy but otherwise delicious Pig & Fig Pizza (featuring fresh mozzarella and balsamic with Prosciutto, figs, thyme and mascarpone) and their Buffalo Cauliflower, we were happy to order our share of beers until our next visit (perhaps their Propagator location in Venice/Marina Del Rey, which we found out about during the tour - at this rate, why not make it four-for-four?) 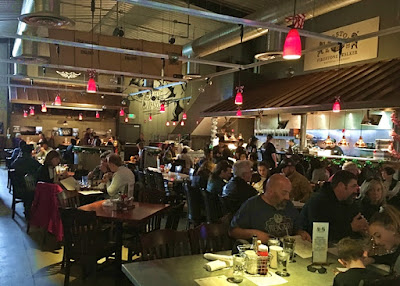 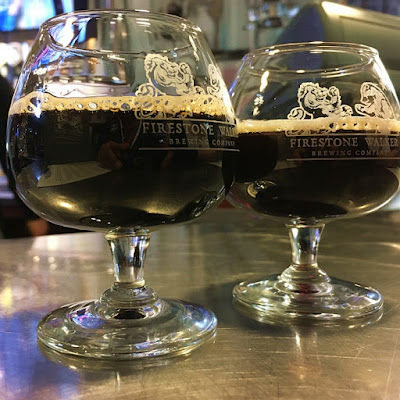 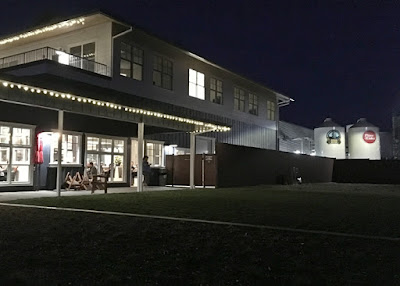 In the craft brewing world, the destination quotient of Russian River Brewing (which we blogged about nearly three years ago) far exceeds its footprint in both its facility size (until 2018, a modest brewpub and separate production facility in Santa Rosa, CA), its production (even with their highest production ever at 25,000 barrels last year, this brewery has never and still doesn't come close to cracking the Top 50 craft breweries in that category) and distribution (limited to three states outside of California.)

However, this quotient is well earned, resulting in long lines outside of their brewpub, especially during their annual Pliny the Younger event, set for the first two weeks of February. First brewed in 2005, this Triple IPA is always meant to be drunk fresh, and its reputation as one of the best such beers around has sent tens of thousands of aficionados on a quest to knock it off their bucket list in Santa Rosa or at a local distributor lucky enough to score a keg or two. 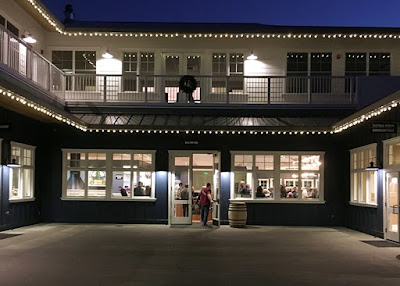 Considering the original version of Russian River started brewing in 1994, and that the Santa Rosa brewpub has been around since 2004, one may find it surprising that a facility to mirror that destination quotient hasn't been built until 2018.  But indeed, now it has, and we were eager to kick the tires on this new production facility/tasting room/restaurant facility in Windsor, located roughly ten miles north of the original brewpub. 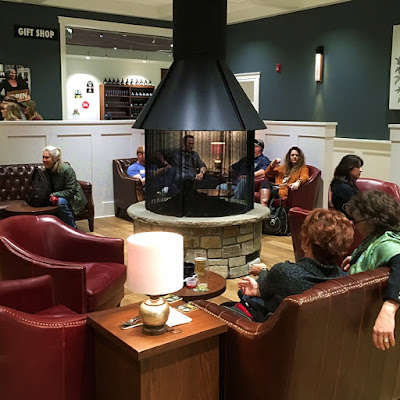 Yes, the facility as a whole is large, but the interior spaces where people congregate still have a more cozy, intimate feel to it. There's enough space inside to incorporate a little fireplace nook with comfy couches and sofas; meanwhile, the tasting room and souvenir shop are not excessively huge compared to other big name breweries we've visited. 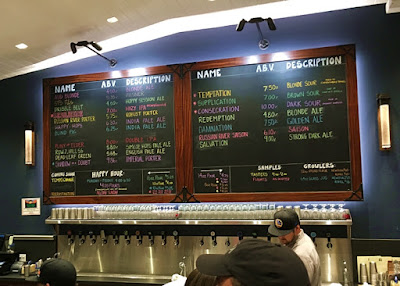 The menu itself is also a change from the brewpub, exchanging a mainly pizza-based menu for an open kitchen serving upscale pub fare with appetizers, salads, entrees that cover the gamut from a burger to salmon to steak, and some house made ice cream, a result of co-owner Vinnie Cilurzo's main non-beer-related hobby. The brewery did a smart thing as well by building in two distinct bar areas that have a level of separation from the restaurant seating - the brewpub space in Santa Rosa really is far too cramped to get much of that feel at all, except on the very rare slow day. 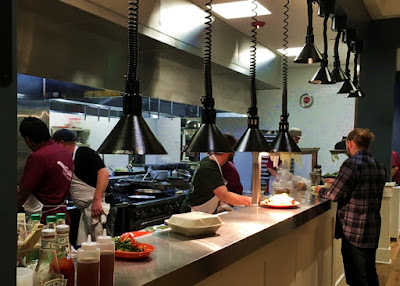 The one thing we did notice was that if you were simply there for beer, there really wasn't a place inside (outside of the couch nook) that you could rest your beers unless you were lucky to have a seat at one of the bars itself. We also didn't think it would be kosher to grab one of the tables, since we figured those were meant strictly for restaurant service. The addition of strategic mini-shelves lining some of the window panels would be a small but well-received upgrade for the standing-room types. 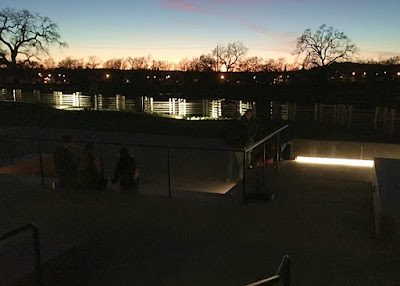 With cooperative weather (on this evening, the night was a tad chilly, so our time outdoor was limited), the outdoor beer garden is a great place to enjoy a beer. This one-acre plot of land is pet-friendly, with plenty of spots to grab a seat and lots of lawn for your two-legged and four-legged visitors to run around. Be mindful that if you do want to bring a beer outdoors, you must get it in a non-breakable pint glass. This policy works great as a money-saving and safety measure, and had no negative effect on our enjoyment of our Pliny The Elder IPA and Windsor Porter beers. 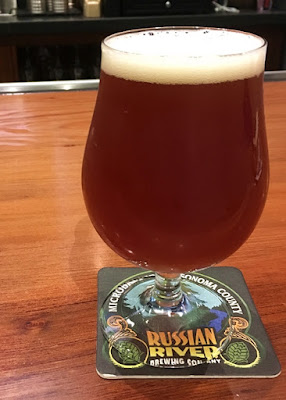 However, for their signature sours, we figured glass was the only way to go. We ventured back inside and closed out our first (but not last) visit there in the best way possible - a pint of Consecration, Russian River's aged dark ale aged in Cabernet Sauvignon barrels with black currants and all sorts of funky bugs (and one of our most favorite sour beers) in a tulip-style glass, for both of us. In a way, this purchase was our dual mutual toast, one to ourselves for finishing off another fun and memorable road trip, and the other to a brewery which has more than earned its status as craft beer destination.