As it turned out, our dalliance with an Paso Robles' Pappy McGregor's (an Irish Pub detailed in my last blogpost) was just a sign of the unexpected international tour we would end up getting with our Paso Robles travels.

Obviously, California has more than held their own in the wine making world the past few decades, and much of that has come with grape varietals such as Chardonnay, Pinot Noir, Merlot, Cabernet Sauvignon and Pinot Blanc that originated on French soil (on a side note, Zinfandel, one of California's big players in the wine-making world, actually traces its origins to Croatia.)

However, less familiar stateside are wine styles from France's Rhône Valley. Grenache and Syrah will probably ring bells for even the casual wine drinker, but seeing other grape varietals such as Marsanne, Mourvèdre, Picpoul Blanc and Counoise are still somewhat uncommon.  As it turns out, many of the wineries around Paso Robles feature the perfect climate and soil to grow these grapes, and we heard word that the wines coming from the grapes grown at Tablas Creek Vineyard, a pioneer in the state for these Rhône varietals, are among the best. 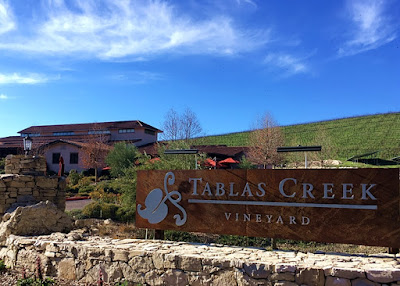 Forged from a partnership of two prominent wine-making families (the Perrin family of France's Château de Beaucastel, and the Haas family of California's Vineyard Brands), Tablas Creek Vineyard was the result of a four-year-long search for land that would mimic the growing conditions in the Rhône Valley. Even more special, Tablas Creek has a more intimate connection than most with France itself - to ensure grapes would be of the highest quality at the new vineyard, numerous wine cuttings and rootstock were imported directly from Château de Beaucastel and planted at the winery's 120-acre plot in the hills west of Paso Robles.

The facility and the land surrounding it is gorgeous to say the least. In a unique effort to be environmentally friendly, a washtub full of ice-cooled reusable water bottles were available to tasting room visitors as one arrived. 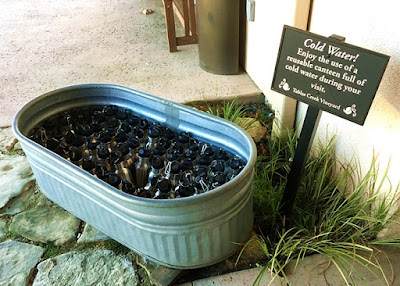 Inside, the space is quite appealing, with plenty of wood framing and several bays available for sampling Tablas Creek's offerings, with barrels and tanks visible behind glass throughout. Our guide made the experience even that much more genuine, sporting the unmistakable accent that only one who grew up in France could sport. 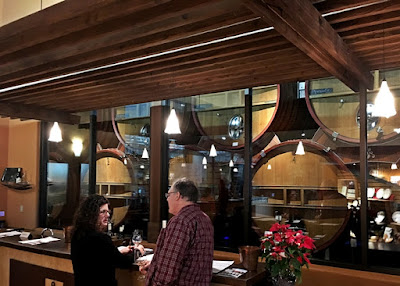 Perhaps more than other wineries we have visited, our wine samples were universally excellent all around from beginning to end, so good in fact that a couple of their more expensive bottles (definitely a first for us) in their Tannat and 2015 Esprit de Tablas made it on the trip back home with us.


After Tablas Creek, we decided on a whim to pop into local olive oil producer Pasolivo. We discovered their property has an interesting history of its own, having been previously owned by Hollywood director King Vidor, perhaps most famous for directing the black-and-white portions of the movie Wizard of Oz. 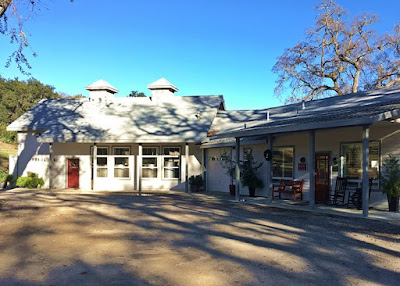 Along with vineyards, the land around Paso Robles sports its share of olive trees, something brought over from Europe to California by the Franciscan Friars of Spain, starting in San Diego in the 1700s and steadily progressing northward through the state. 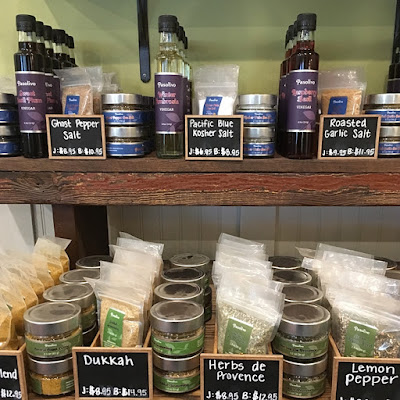 To be honest, we weren't there to buy a whole lot especially after spending a nice bit of cash at the winery, but the easy-going atmosphere and the addition of something we had never had at a prior olive oil/balsamic vinegar tasting (namely, samples of Pasolivo's herb blends and gourmet salts) made our tasting something of fun free-for-all of sorts, as we mixed all four elements with little hunks of bread at random in the name of culinary discovery. 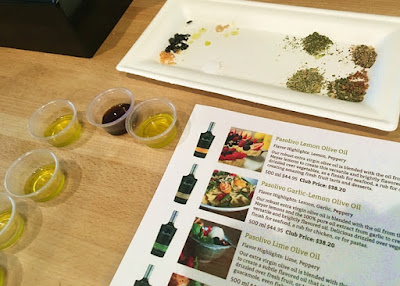 We walked away with a couple packets of their herb blends and a promise (keeping in mind weight limits for baggage on the trip home) to order some of their tasty and award-winning olive oils and balsamic vinegars online to replenish our diminished supplies once we got home. 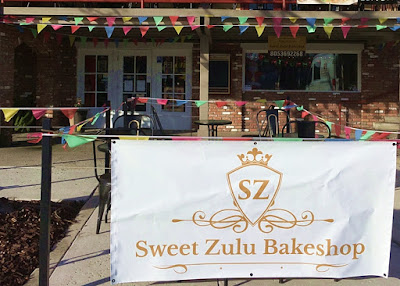 We don't run into many South African eateries during our travels, but the ones we have encountered have been great experiences.  Here in Columbus itself, two food trucks (Hisham's and Fetty's Street Food offer up fine renditions of South African street food, and CapeTown Bar and Grill in San Diego offered a unique blend of restaurant, lounge and bar, and mart for South African goods.

When we stopped by the recently opened Sweet Zulu Bakeshop on the east side of downtown, we were merely looking for a quick bite and a coffee. Those breakfast items we ordered that day, a Breakfast Burrito (made in bowl form by request) and Sandwich were more than acceptable, with the most personable and friendly service we've had by any eatery in some time. The eatery also offers up a selection of deli sandwiches for lunch. 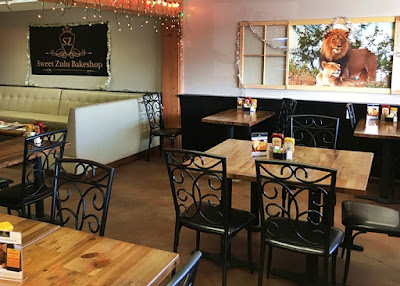 However, our standout item turned out to be something I had become familiar with from my visits to Oakland's Bakesale Betty in their Australian-version Lamingtons. When I relayed my experiences before, we learned of their South African heritage then, as we were told these were in truth the South African rendition (Ystervarkies, which is Afrikaans for hedgehogs).  I also discovered later on that Cleveland of all places has its own version in its Coconut Bars. 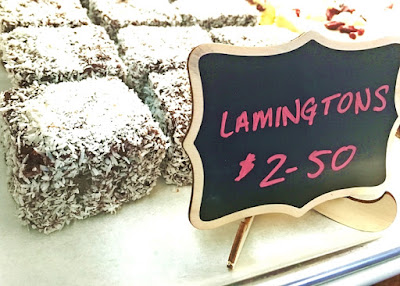 We also discovered that the sweets are made from more wholesome ingredients, in part due to owner Riana de Nysschen's battle with breast cancer and her desire to satisfy her sweet tooth. As for the Lamingtons, I'm not sure what differences there are between the regional versions, but I can tell you Sweet Zulu's renditions were both delightfully decadent and a perfect road trip snack. 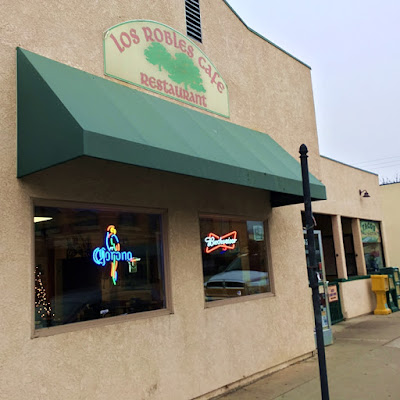 Finally, we come around to the Tex-Mex specialties of Los Robles Cafe. During our last visit to Paso Robles, this turned out to be our only substantial meal from a local eatery and it turned out to be an awesome random choice, pumping our bellies full of tasty Mexican breakfast dishes. 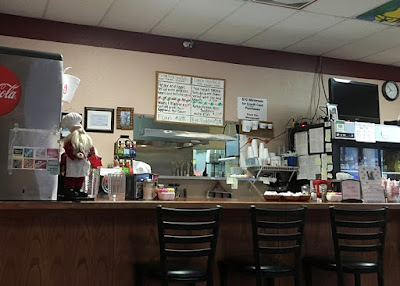 Our return saw that nothing had really changed (obviously a good thing, in this case.) There’s really nothing remarkable about the exterior or interior of the space, but it’s not exactly a hole-in-the-wall either, sporting actual WiFi service if one needs it. Perhaps the one major change was the advertising on the ceiling panels above, which would be tacky (yet understandable) and easily ignored if it weren’t for their unique artistic flair.. 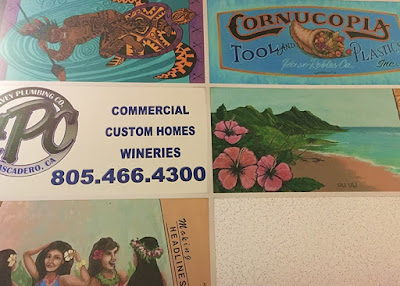 We had tried the Huevos Rancheros and Machaca with Eggs on our first visit, so we went for two new dishes on this visit. My spouse's decision was pretty much made even before we walked in, and the Chilaquiles did not disappoint; it was definitely one of the best versions we've ever had. Meanwhile, I enjoyed an enhanced tamale experience with my Tamal and Eggs. If Mexican Breakfast is your goal, Los Robles should be your primero choice when you're in Paso. 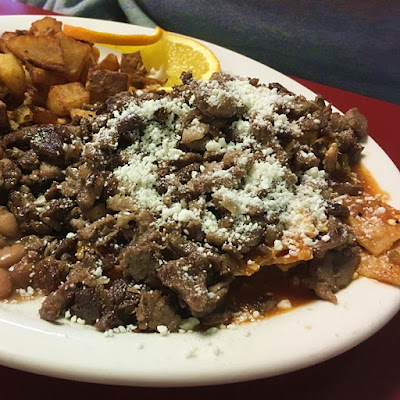