While the town may officially be known as The City of El Paso de Robles (The Pass of the Oaks), the town's residents go much simpler and call it "Paso." Of course, that designation is helpful as well to tourists like us, who decided that a revisit of this somewhat quiet Central California hamlet nestled roughly three hours (with favorable traffic) south of San Francisco on Highway 101 was in order.

Our last visit several years ago was more of a strategic one: Paso Robles allowed us a central and relatively inexpensive jumping off point to go exploring parts farther south such as San Luis Obispo, Solvang and Buellton. This time around, we figured we'd give Paso and its surroundings a sampling this time, and it turned out to be a still too short but highly enjoyable two days in and around this town of roughly 32,000 people. 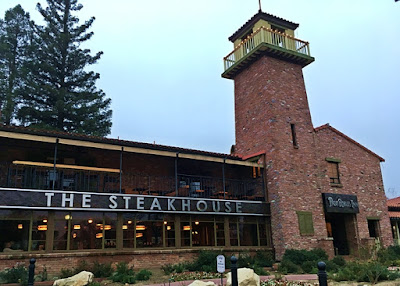 I generally don't write much about our lodging, but the Paso Robles Inn is a place that's worth more than a casual mention. This area landmark offers a yesteryear-styled resort/hotel experience, mainly borne from the area's natural artesian hot springs. These hot springs drew numerous famous performers and celebrities to the inn until 1940, when a fire destroyed the original structure. The rebuilt facility was designed to accommodate the growing, in vogue trend toward automobile tourism. 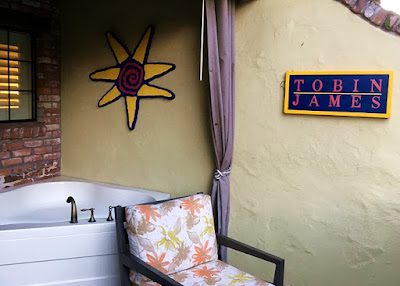 Currently, over a third of the inn's rooms feature access to the these springs via hot tub, and a room featuring such has been our default selection. The Deluxe King Spa Rooms not only give you access to your private hot tub, but also have the unique distinction of being sponsored by some of the area's numerous wineries.  This could be tacky if done wrongly, but our room, sponsored by Tobin James Cellars (ironically, the same room we were booked into by chance on our last visit) used its sponsoring winery's logo and other related media quite tastefully. 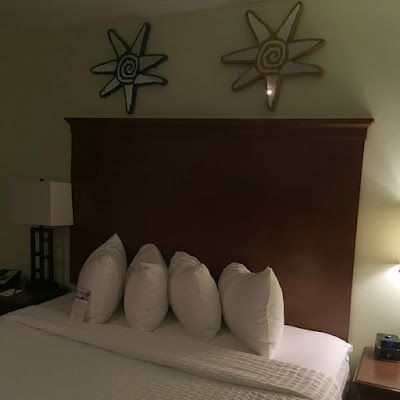 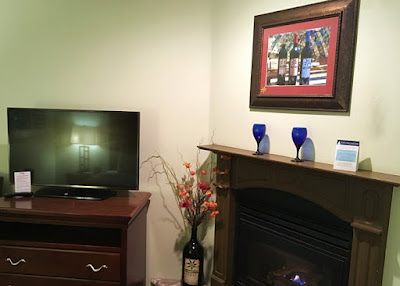 Strolling through the inn's property are worthwhile, allowing you to experience among other things their greenspace, several water features, wall murals, and even a cobbled reflexology path. 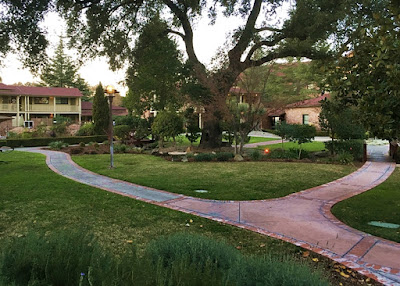 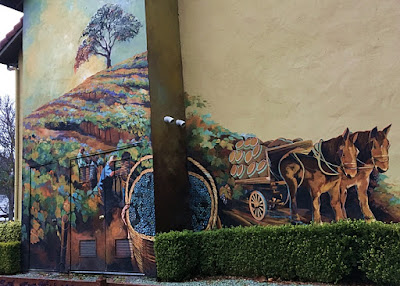 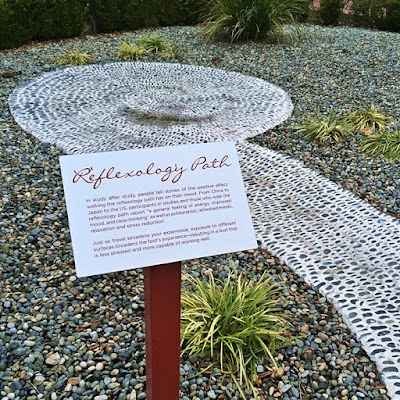 Food-wise, the Inn hosts a coffee shop and a steakhouse; the latter is the venue in which the Inn offers up their annual Christmas Day Buffet. 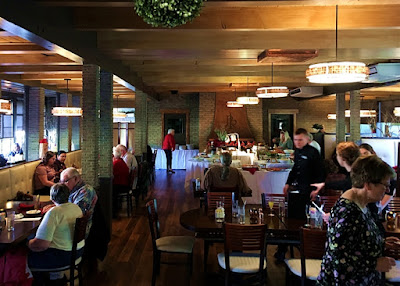 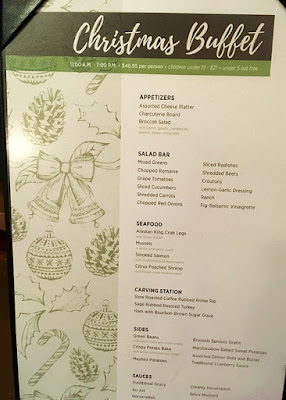 Interestingly enough, this was our first such Christmas Buffet experience, and we made sure we got our money's worth of prime rib, crab legs, cheesecake, mimosas and other items to account for the roughly $47 per person rate. One thing we did learn that's applicable to other buffets: eating at an off-hour like we did has a distinct benefit (little to no lines) and a distinct drawback (the lack of diners meant lower turnover, meaning certain food items sat around a bit too long to maintain ideal texture.) 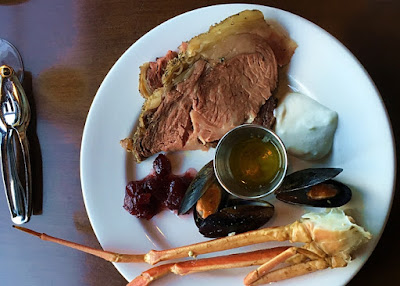 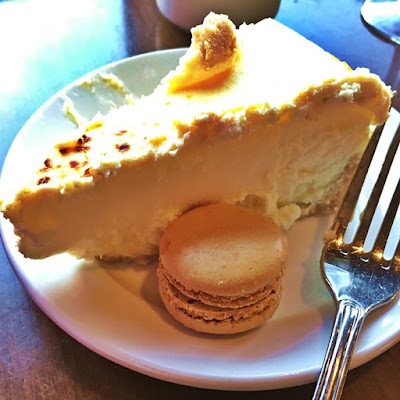 Our other dinner experience in Paso was definitely not on the radar until we walked around the main downtown square and noticed the number of places which had Cioppino seafood stew on the menu, Pappy McGregor's version, which was nicely priced and highly touted (the winner of the Cioppino and Vino event held just a few months prior), was definitely the most unexpected considering the Irish Pub venue, and provided enough enticement to check them out. 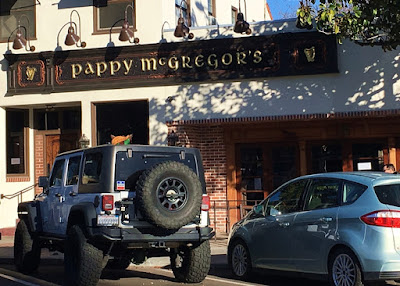 Even more surprising was the interior of the restaurant, which sported ample amounts of abstract art and a distinctly modern...just kidding. Of course Pappy McGregor's sports all the usual things you'd expect in an Irish Pub; the main space itself is divided essentially in two, with tables and a long bar dominating one half and a smaller bar and a library/den-styled section filling out the other. An outdoor patio offers the chance for warm-weather dining and private gatherings (more on this later.) 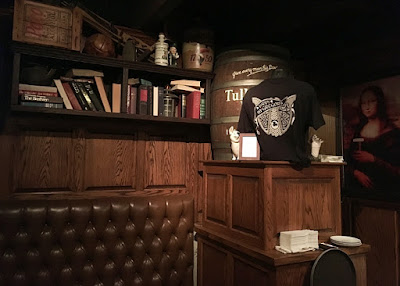 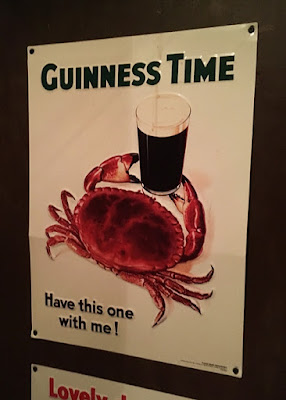 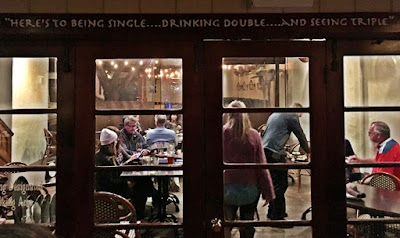 The menu itself is far more eclectic than what you might expect in a standard Irish pub or just pub menu in general; standards like Halibut and Chips and Fried Pickles are outnumbered by items like Short Rib Nachos, a Bahn Mi Sandwich, and something dubbed Thanksgiving Leftovers (hand-pulled turkey, house made stuffing, mashed potatoes and gravy, cranberries, and broccolini.) All manner of adult beverages aside other the prototypical Guinness are available as well, including cocktails and a selection of local wines and craft beers. 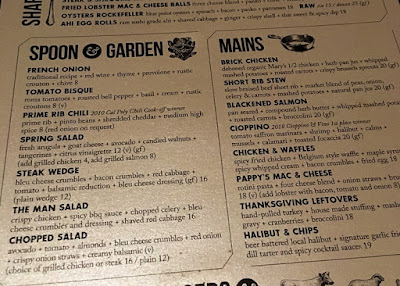 My spouse's Cioppino stew turned out to be a worthy first ever restaurant version of this dish (we've had a homemade rendition once before); the lack of halibut on hand was made up for with the substitution of more tasty mussels.  Meanwhile, I went with a combo of items that turned out to be more food than I thought: their Prime Rib Chili (another former award winner) was a novel take on this dish, but even better (and more beefier than I figured) were the pub's Scotch Eggs, with a nicely spicy sausage and nicely light and crispy panko crust.

Only thing I wish I could've had more of was the accompanying citrus mustard aioli dipping sauce, but my stomach probably appreciated that slight bit of extra space.  My stomach also probably appreciated that we did not find out until after we got back to Columbus that the 1122 Speakeasy Bar, accessible via the patio area of Pappy McGregor's, was available for more imbibing had we chosen.

But all things considered, we're only mildly regretful: another soothing hot tub mineral water bath awaited us at the Inn after our meal, and we and our full bellies were more than happy to oblige.