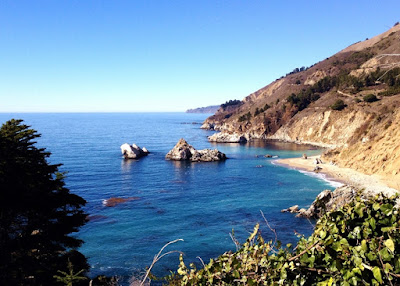 I cannot say with certainty that the Big Sur on California's Central Coast is the most spectacular stretch of coast in the world. But I will say that this stretch of coastline, which ranges from San Simeon in the south to Carmel Highlands in the north, is most certainly one of the most spectacular places I have had the privilege to travel through, and this area is a must visit for any visitor with some extended time in the Golden State.

From the south, Hearst Castle in San Simeon is a natural jumping off point for your journey, but if touring millionaire mansions isn't your thing, the publicly accessible elephant seal rookery a few miles to the north is most definitely worth your time.  As one might imagine, the seals are an incredibly popular attraction, and on this day, the line of cars trying to turn into the parking lot of the main viewing point reminded us of the queue that crawls on the Golden Gate Bridge to try to enter the Vista Point areas. 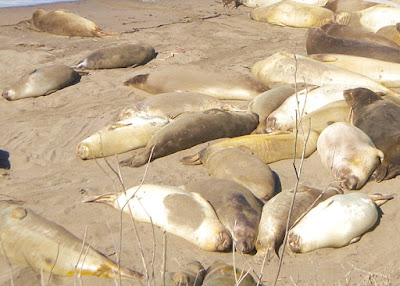 Luckily, this is where a little previous experience helped out - the beaches all along this stretch act as nesting/resting grounds for the seals, and we proceeded north to the next parking lot, where it turned out the number of seals on the beach outnumbered the people gawking at said seals. December is a prime time for the mature bulls to arrive and establish their pupping areas, and we were lucky enough to see one massive bull scare a couple smaller bulls away from their spots. But for the most part, the seals here were mostly intent on laying out and dozing underneath the warm California sun. 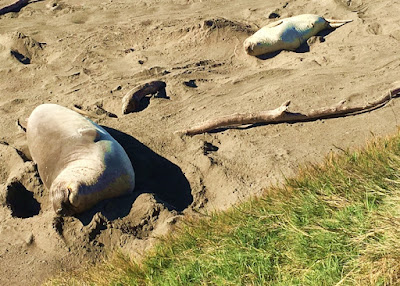 The crowds at the main Elephant Seal viewing point proved to be a recurrent theme on our trip northward. Popular stopover points like Ragged Point, Nepenthe, and Lucia were packed sardine-can-like with many locals, tourists and bicyclists enjoying this between-the-holidays weekday. Perhaps much of this is pent up demand: the main artery through this area, the winding road that is California Highway 1, had been closed for 14 months from May 2017 due to a massive mudslide at Mud Creek. As it turned out, work is still being performed in that area, something which temporarily halted traffic in both directions with the highway reduced to one lane. 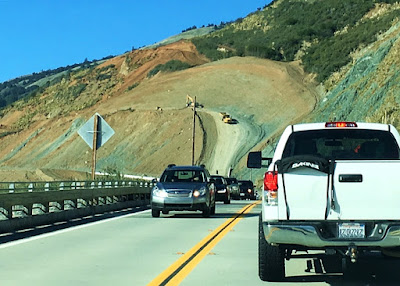 This, combined with the collapse of the Pfeiffer Canyon Bridge farther north, made life extremely difficult for local residents, many of whom make their living on tourism dollars.There were no such lane restrictions around the bridge, but we were faced with a whole lot of congestion as we approached the currently closed Julia Pfeiffer Burns State Park.  The closure of this park and the surrounding area meant the trailhead leading to possibly the most spectacular waterfall in the area in McWay Falls (which cascades into an oceanside cove) was publicly inaccessible.

Since the highway itself through the area was never set up for parking and viewing, those who wanted to view the falls had to go to somewhat extraordinary lengths (parking quite a bit away in some instances and then weaving salmon-like against the flow of returnees along a narrow shoulder) to get to the part of the road that allowed the best view of this gorgeous natural wonder.

These traffic hassles are examples of two undeniable truths about the area. Despite the sometimes foreboding and rugged appearance of Big Sur and the rest of the Pacific coast, this landmass is fighting a losing war with Mother Nature. First and foremost, the Pacific Ocean itself eats away at the coast line, aided by the rain and wind of sometimes ferocious storms. Wildfires in recent history have actually burned to the coast, setting up the perfect conditions for massive rock and mudslides.

More hidden to the visitor is the land itself, which is as part of the Pacific plate being pulled inexorably toward Alaska at the rate of up to a few inches per year. It is these losing battles that help make Big Sur the strikingly beautiful place it is, but it is those same battles that will make Highway 1 an eternal source of cleanup and repair for state Department of Transportation employees.

Highway 1 darts inland for a bit into the town of Big Sur and nearby Pfeiffer Big Sur State Park (not to be confused with Julia Pfeiffer mentioned previously.) Here, one can get a taste of the forest lands of the coastal range as well as a number of options for shopping and dining.  From there, the road darts back out toward the coast again, past more popular stopovers like Hurricane Point, the spectacular Bixby Bridge, and Big Sur's northern terminus in the Carmel Highlands and Point Lobos State Natural Reserve. 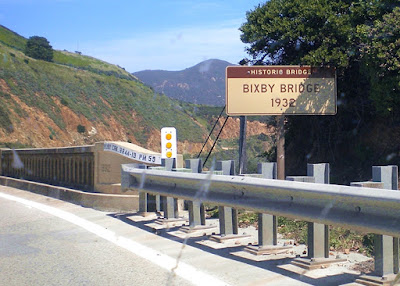 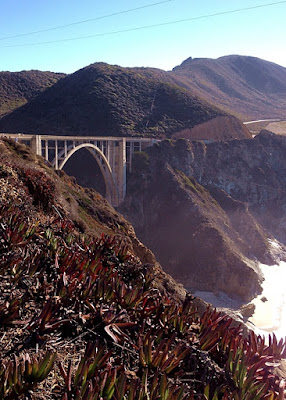 Monterey and its immediate surroundings (including Carmel-by-the-Sea and Pacific Grove) are generally considered its own separate region as well as tourist destination in its own right, with attractions like the Monterey Bay Aquarium (a place we have NOT been to yet but is high on the to-do list), Cannery Row (not too unlike San Francisco's Fisherman's Wharf area), and the 17-Mile Drive (for a fee, you can access a private road that gives you access to some of the area's famed coastal landmarks like Pebble Beach and the Lone Cypress.)

However, there are plenty of beach areas along here which are completely free to the public. One of the most popular is Lovers Point, a particularly photogenic outcropping of land in Pacific Grove that was unsurprisingly teeming with locals, lovers and a few four-legged friends. 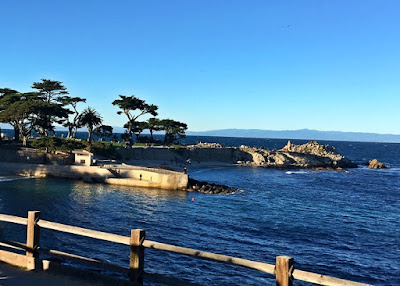 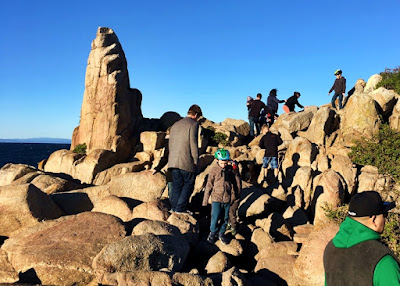 Like breweries, our trips almost always include at least one knitting shop, and Pacific Grove provided that opportunity with Monarch Knitting, located within easy driving distance of Lovers Point. 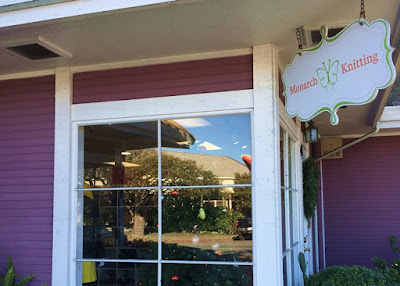 The shop has a long history in Pacific Grove, existing for 18 years as Monarch Knitting and Quilts prior to 2013, when current owner Ann Patterson saved the shop from closing.  Feel-wise for us, it felt most closely to another yarn shop we encountered on our eclipse travels in the Prairie Fiber Arts Center in Moorhead, MN; locally, it's somewhat like a larger edition of Dublin's Knitting Temptations. 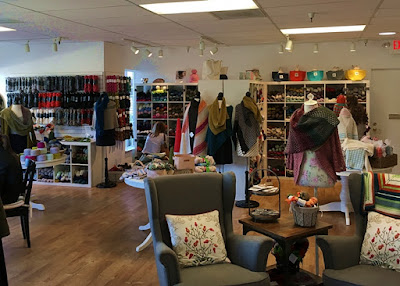 Monarch Knitting proved to be well-stocked with many of the fiber familiars and ample knitting supplies, but not much in the way of local yarns (their only local brand is something one can grab in Columbus.)  The store was fairly bustling when we got there, with even a couple of male knitters roaming the store. However, Linus, the owner's dog who has become the unofficial official shop mascot, was not available for a warm canine greeting. 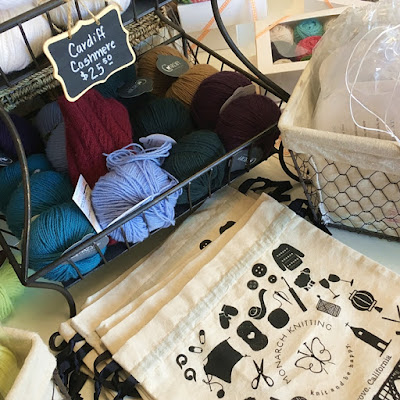