Craft beer fans know that Colorado's breweries rate as some of the country's best. That fact did not escape our mind during our 2015 trip to visit my spouse's brother and his family in the Denver area. Thankfully, her brother (like most of the family) has been into craft beer for quite awhile - in fact, during his years in Columbus, his first homebrew kit came from the Clintonville's Winemaker's Shop from none other than Angelo Signorino, the longtime head brewer at the venerable Barley's Brewing Company.


For a day, her brother graciously chauffeured us to some of Fort Collins' finest breweries. During our journey, he mentioned that breweries there just simply couldn't open up and expect to be successful; they had to have at least a couple years planned out to even have a chance to make it in what was and still is a competitive beer scene.

Back then, that was nowhere near the case with Columbus, a beer scene that was still growing and evolving. Not so much anymore, though - in my mind, Central Ohio's scene has reached a point where a new brewery's chance to establish their footing has shrunk considerably. Indeed, many of the newer arrivals, including but not exclusive to Combustion, Somewhere in Particular, and Pretentious, have been received favorably fairly quickly by the locals. This notion was tucked in the back of my mind when my spouse and I dropped by to one of the area's newest in Powell's Nocterra Brewing for a sneak preview.

Nocterra Brewing seems to tread at first the somewhat common "homebrewer decides to open brewery" story line. In this case, this brewery is the brain child of Bruce Vivian and Bryan Duncan, two home brewers who grew to know each other through numerous brewing competitions and also discovered an additional mutual love of all things outdoors. In fact, the name Nocterra is a nod to those mutual loves, with the "terra" referring to land and "Noc" referring to their long hours at night spent brewing beer at home.

That turned out to be just a little hint of how promising this particular brewing venture really is. As fellow business partner and Sales/Marketing Manager James Knott showed us around, we were struck by the amount of thought that went into aspects both large (the nod to the building's past as a train freight depot, with the strategically integrated train rails, an overhead train bell, and a genuine rail signal light) and small (the artistic elements in the brewery's striking moth logo that may not be noticed at first, and the planned bottle labels which are both stylish but beer geeky at the same time.)

Nocterra has also put a lot of forethought into its future. The brewery has a canning machine on hand (the only one currently in Delaware County) with the intention initially of self-distributing their wares. In the back, a room for the planned barrel-aged sour area (with separate HVAC system, to avoid cross-contamination) with attached laboratory space is in development, boding well for those seeking out that particular style of beers.

Also in the works are craft sodas, just one of numerous ways the brewery is striving toward a family-friendly atmosphere. The television situation also leans that way as well; for now, Nocterra is eschewing the idea of being a televised sports gathering place, going more for a quieter-experience (a bonus in our books) and more specialized outdoor-related activities and viewing events.

This future thinking also extends to the brewery's exterior.  The layout already accounted for a pre-designated spot for food trucks to park, allowing patrons to grab some eats without leaving the property. However, plans are in the works for fire pits as well as the possible additional integration of barbecue grills while having ready-to-grill meats available for visitors (for me, that rated as a "why didn't I think about that?" idea.) 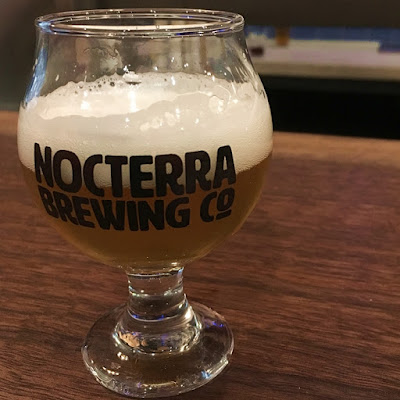 Of course, the beer is going to be the ultimate determiner of Nocterra's success, and so far so good on that front.  Our first samplings of everything rated as good to very good, from their base Helles Lager (perfect refreshment after some intense outdoor activity) to The Dan (a classic Dunkel with a neat little story behind its creation) to our two mutual favorites of the night, the Scioto Coast Double IPA (perfect for my spouse's leaning toward hops) and my favorite, the Terra Noir Baltic Porter with coffee from local roaster Jennings Java. Making this beer tasting even better was the time spent with James, Bryan and Bruce, as we chatted casually about a variety of beer- and non-beer-related topics.

Since our visit, the brewery has continued putting the finishing touches on their taproom, including some really neat looking tap handles as well as some really spiffy chalkboard menus from local artist Jennifer Rojeanne.  With the caveat that one can never truly know the future, our preview experience and those additions have left us with a really good feeling about Nocterra - the brewery seems to have a nice extended ride on the Swell Line (their name for their line of planned fruited kettle goses) in store for it well into the future.

Nocterra Brewing is set to have its Grand Opening to the public this Saturday, February 2nd starting at 12 noon. For more details, please consult their Facebook event listing.