You Can't Spell Nostalgia without L-A-G

Does owning one album from a cult artist count as nostalgia?

Back in college, my favorite place on campus was not the outdoors and most definitely not the classroom, but rather either of the two listening rooms deep inside the bowels of the college radio station. I couldn't imagine much better than cozying up by my lonesome a couple hours with a few dozen vinyl albums, both new and the previously unexplored, prepping for the week's show.

One day, a colleague of mine asked me if I had heard of Jandek.  The Jam, John Lydon and Jesse Johnson, sure. The Jesus and Mary Chain? Joy Division? Yep. But Jandek? I shook my head no.

My colleague's eyes rounded like large saucers. He touted his love of Jandek (almost certainly one Sterling R. Smith), his reclusive nature, and his rambling, weirdly bluesy compositions. In fact, Jandek, who sports Texas roots, might be the cultiest of all cult artists; through his Corwood Industries label, over 100 albums have been produced since the first LP was released in 1978.

An inquiry from an interested party might be reciprocated with a bundle of copies of his latest work, and generally his work can be obtained at relatively low prices. Before I knew it, a copy of his latest album, "You Walk Alone" (the album pictured above) was in my hands.  He looked a bit like Beck, though I would not reach this conclusion until several years later when Beck released his 1994 debut "Mellow Gold." Best of all, the album was free: for a broke-ass college student like me, anything free was indeed gold.  And now for nearly three decades, I've owned a piece of Jandek. 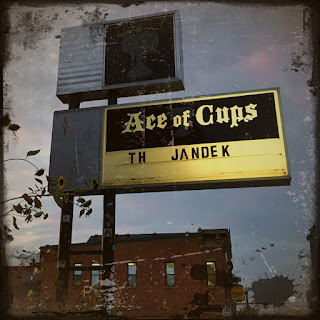 At one time, nostalgia was considered a serious condition, described by physicians as a mental mania that was exceedingly debilitating to the afflicted.  Now the word merely refers to a longing for the past, and that was the overriding feeling when I decided I'd drop by Ace of Cups to catch Jandek perform live, an event which is still rather uncommon.

I admit back then his music didn't click with me, but in the days before the concert, I chose not to listen to my lone album of his, figuring I would go in free of any mental preconceptions. This was also my first visit to Ace of Cups, which I had known only for its connection to the delicious barbecue of Ray Ray's Hog Pit and now found to be a nice little venue with reasonably priced musical concerts as well as karaoke, trivia and dance events . I grabbed Columbus Brewing IPA on draft, traded stories with a few obviously stoked fellow concert-goers, and awaited the show. 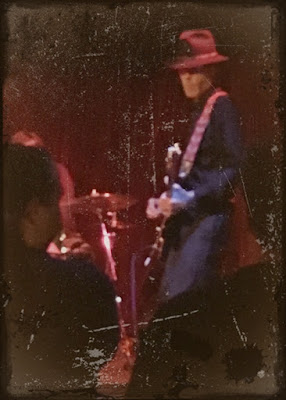 The performance itself, or at least, what I saw of it, was quite mesmerizing. Jandek, angular and gaunt, draped with black, raged intensely early on with stream of consciousness lyrics, possibly created that very day as he read them off a paper pad, though he did back off a touch as the night progressed. As is his custom, he never really acknowledged the gathered; that interaction was left to the lone female in his quartet Sheila Smith, who achingly swooned, swayed, and generally seduced those in the audience with her lyrics. 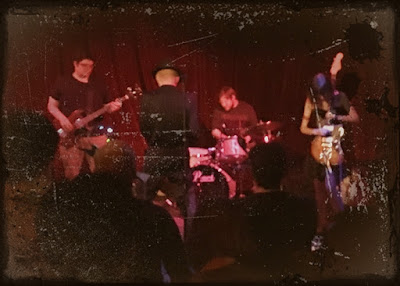 Alas, I realized halfway through that I wasn't the privileged few who could appreciate the performance in front of me. Expected? Perhaps. But still, the disappointment was enough for me to sneak out for something I knew I could appreciate - a piping hot pepperoni slice from the Mikey's Late Night Slice across the way (the Unicorn Sauce proved especially perfect on this night.) 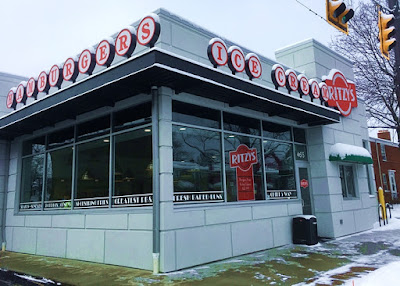 Well, how about visiting a place loaded with nostalgia, but a nostalgia which you don't share?  I've had my share of that while roaming Ohio, most notably with the last, lone outpost of Clancy's, a small hamburger chain that was my spouse's favorite burger growing up and a one that ventured into the smaller communities of the Midwest well before the big guys finally realized they could thrive there as well.

In that case, I found that based on what I had, I could've easily made Clancy's a regular destination had I grown up with it.  So what about Ritzy's, a place with its own reservoir of nostalgia which just returned to Columbus after a nearly two-decade absence? 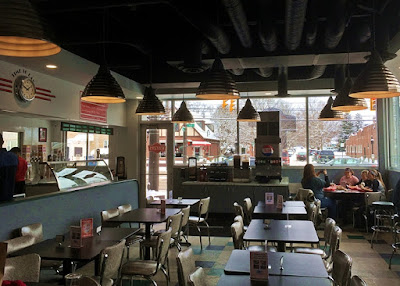 My fellow blogger CMH Gourmand details the history of this eatery in Columbus far better than I ever could, so I figured I'd skip that and get to the meat of the matter. This reborn edition of Ritzy's is something I'll call diner-industrial, with the bottom three-fourths of the space featuring the appealing diner vibe and the top one-fourth filled with ductwork. The lot which Ritzy's sits is also on the smallish side, shrinking both the restaurant and the parking lot (even with a smaller car, it was a little challenging to park.)

For me, I figured the classic burger, shake and fries combo was the way to go on my first visit. Ritzy's offers a customizable burger via an Chipotle-styled assembly line. Freshly fried shoestring fries are piled up at the next station, and since I was dining in, the milkshake, created from their inventory of house made ice creams, was brought to my table shortly after I sat down. 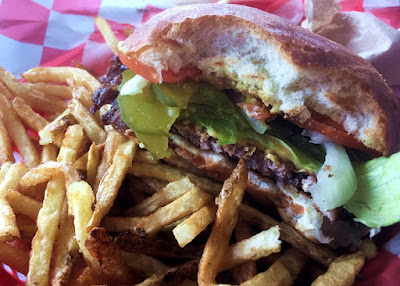 My recent burger excursion with CMH Gourmand showed the importance of ratio of beef to bun, and Ritzy's traditionally pressed beef single patty frankly didn't seem to provide that. This leads to my first of two surprises in that the burger was beefier than I thought it would be, and the bun was better than most. Still, a second patty is probably preferable, which leads into my second surprise - price point. Throw in some cheese and maybe bacon, and you're talking about a burger that price-wise is comparable to its cross-street neighbor Bareburger, something I had not expected. 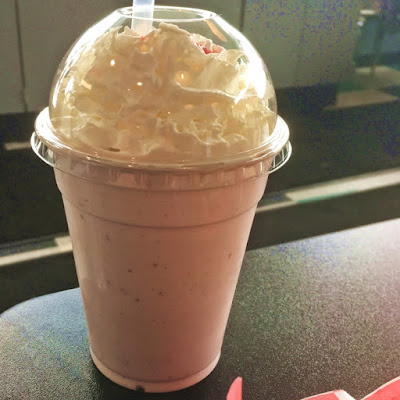 The shoestring fries fell into the top half of the enjoyment tier for me - more preferable than folks like In 'N Out, Whataburger, and Burger King, but not nearly as good as Five Guys, McDonald's, and Culver's. And the strawberry shake (the first in many years) was really quite good, with big chunks of strawberry that were easily impaled and extracted via the straw.  But here, price point is an issue - $4.99 for what is a modestly-sized shake might deter demand a bit.

So what of Ritzy's? I liked it well enough, but here the same long-term success questions I had posted regarding Bareburger apply here, mainly due to competition. The burger market here has never been hotter, with a couple of newer Northeast Ohio arrivals in The Rail and Swenson's (the latter of which has plenty of nostalgia going for it in its own right) making their mark, and Preston's Burgers (the successful burger-based venture launched by Columbus chefs Matthew Heaggans and Catie Randazzo) joining the fray. And the buildup leading up to the arrival of the phenomenon known as Shake Shack here in Columbus is sure to be intense.

What's a nostalgic blogger to do?  I suppose eating more burgers wouldn't be a bad idea. Vinyl record on the turntable is also preferable, but not mandatory.